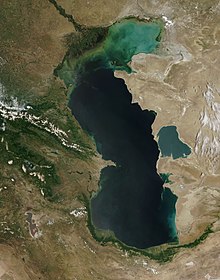 Eutrophication phenomena in the northern area of ​​the Caspian Sea , east of the Volga estuary : algae bloom due to high fertilizer supply (satellite image from 2003)

Eutrophication (from the Greek εύτροφος eútrophos , 'well nourishing') is a term from ecology . This generally describes the enrichment of nutrients in an ecosystem or part of it. In the narrower sense, the (anthropogenic) increase in the nutrient content of water bodies caused by humans is usually meant through dissolved nutrients, especially nitrogen and phosphorus, which is usually associated with negative consequences for the ecology of the water bodies and their usability by humans. Eutrophication is based on nutrient input with nutrient enrichment in the system. The Duden defines it as "an undesirable increase in a body of water in nutrients and the associated useless and harmful plant growth".

The increase occurs mostly through the inflow of nutrients from wastewater and through input from intensively fertilized agricultural areas . The eutrophication of a body of water causes an increase in its primary production , which results in increased oxygen consumption .

The eutrophication of a body of water is not a condition, but a process. Plant nutrients are brought from the catchment area into the water, which acts as a natural sink; today, in some cases, the entry from the air (washing out of air pollutants or dust by rain) is significant. The entry can take place in inorganic form, as dissolved nutrient salts, or in the form of biomass. Hydrobiological research has identified two key nutrients that are responsible for almost all eutrophication processes, nitrogen and phosphorus . Phosphorus is almost always decisive in lakes and other limnic systems, while nitrogen is particularly important in marginal seas and estuaries (as well as in terrestrial systems). The nutrients accumulate in the system. The free water body, the aquatic organisms and the sediment each form nutrient reservoirs, between which there are intensive and varied interrelationships. In terms of organisms, a distinction must be made between the “higher”, usually rooted aquatic plants, for example reed species, aquatic plants such as waterweed and milfoil (the so-called macrophytes ), and the single-celled algae floating in the water, the phytoplankton . In the case of eutrophication, apart from extremely shallow waters, phytoplankton are usually of greater importance for the state of the water. The biomass formed by the organisms is usually not completely mineralized, some sinks to the bottom and forms a gradually growing organic sediment layer, which can ultimately lead to silting up of a body of water.

The current state of the water is classified using the so-called trophy system. While limnologists only distinguished two classes up until the 1950s, oligotrophic (poor in nutrients) and eutrophic (rich in nutrients), other states were added later. In particular, beyond the eutrophic class, a distinction was made between polytrophic and hypertrophic waters, the nutrient content of which is even higher than the eutrophic level. While a eutrophic body of water represents the natural final stage of a silting shallow body of water and is in principle a natural state, the higher trophic levels no longer occur naturally (apart from rare exceptional cases). Eutrophication is the change in state along the trophic axis defined in this way towards the more nutrient-rich states. A body of water, both naturally and as a result of remedial measures, can move along the axis in the opposite direction, i.e. become less nutrient-poor; this is then called oligotrophication. Only those nutrients that are dissolved or soluble, and therefore available to plants, are decisive for the condition of the water. The fixation of phosphate in insoluble minerals or through the precipitation of sea ​​chalk in calcareous waters counteracts eutrophication.

When defining eutrophication, many hydrobiologists not only consider the nutrient content alone, but also take into account their effects in the water. This is due to the fact that different bodies of water can react very differently to eutrophication processes despite the same absolute nutrient content. Eutrophic waters are usually heavily clouded by high phytoplankton stocks, which can form algal blooms , and their visibility is poor . In addition to the nutrient content, other physical and chemical parameters are influenced via the action of the organisms, in particular the content of dissolved oxygen, which in eutrophic waters usually shows a pronounced daily variation between supersaturation during the day and oxygen consumption at night. In deep water, in which algae growth is not possible due to a lack of light, consumption predominates, so that anoxic conditions often occur in deep water and sediment . The species composition of living beings is also shifting, as many species can no longer exist under these conditions, while a few favored species now tend to mass reproduce. In the sediment of eutrophic lakes, the mosquito genus Chrionomus predominates , in oligotrophic lakes the genus Tanytarsus . Many limnologists have included these effects in their respective definitions of eutrophication. In addition to the nutrient content, they depend on other factors such as temperature, light (and thus the depth of the water), its base content and others.

Eutrophication is a natural process in rather rare cases. In the course of the silting up of a lake, more nutrients can get into the lake. In the past, nutrient input increased due to climatic changes, such as in Scandinavian lakes after the glaciers retreated at the end of the last ice age.

Today, eutrophication is usually understood to be the man-made (anthropogenic) intake, especially of phosphate. The phosphates get into the waters from sewage and the soil input from agricultural fertilization through precipitation. The increased phosphate input primarily leads to increased plant production. The effect is greater in lakes than in rivers, since in the latter the nutrients are flushed out much more quickly. Following the plant biomass, the biomass of consumers and destructors also increases . This also increases the amount of organic material that sinks to the ground ( sediments ). In this area ( Profundal ), the microbial degradation of the organic substance increases the oxygen consumption ( oxygen consumption ). If the oxygen concentration in the water drops below 1 mg / l, further phosphate is released from the sediment (phosphate mobilization). This leads to a self-reinforcement of the eutrophication. At the water's edge ( littoral ), eutrophication also causes a change in the plant communities growing here.

In rivers, eutrophication also leads to an increase in production. The epilithic algae in particular multiply in mountain streams and macrophytes in larger bodies of water , which leads to so-called weed growth. Phytoplankton in particular grow in dammed rivers , which leads to “algae growth”. There is also a shift in the species composition.