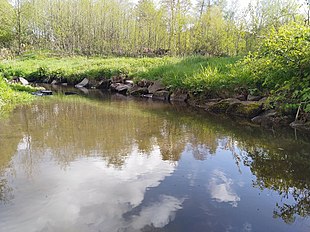 In nature, a body of water is flowing or standing water . It is integrated into the natural water cycle.

According to DIN 4049, a body of water consists of the body of water (the water volume itself), the water bed (the enclosure of the water from the bed and the bank) and the associated aquifer .

There are different criteria for the classification of waters. A classic division is that of seas ( salt water ) and inland water and ground water ( fresh water ). With the multitude of water types, there are numerous border and transition forms.

After main and backwaters

According to the position of the water body

"Märchendom" in the fairy grottoes , an underground water

Waters can lie above the earth ( surface water ) or underground ( groundwater ).

Groundwater as an underground body of water usually occurs as a coherent body of water in the system of gaps in the ground , of unconsolidated rock , or in crevices and crevices of sheared solid rock. For information on the aquifer that conducts the aquifer, see aquifer . Water in completely water-filled caves (see phreatic cave ) is counted as groundwater.

A spring is a connection between underground water and surface water. The opposite of a source is the shrinkage , there surface water disappears into the subsurface.

A body of water is referred to as receiving water if its technical function of being the point of introduction for drainage , especially of sewage , is in the focus.

According to position in the water system

In hydrogeography, a distinction is made between different types of inland waters and seas according to their position in the water system and the extent of the water body .

A distinction is made between flowing water and still water (standing water), which can be above or below ground. There are naturally formed and artificial inland waters.

The largest lake in Germany is the Müritz in the heart of the Mecklenburg Lake District , overlooking the harbor of Röbel

Most natural bodies of water ultimately drain into the sea (see exorheic flow ). Otherwise it is endorheic waters.

Seas are the interconnected standing waters of the earth that surround the land masses. The largest seas are the oceans .

A secondary sea is more or less separated from the open sea:

Sea areas close to the mainland are called coastal waters .

According to the flow behavior

A distinction is made between channels:

According to water flow over time

In the trophic system of ecology, four trophic levels are distinguished:

The terms used in water law are largely based on those in the natural sciences, but are not always congruent and can be subject to historical change. The German Water Resources Act (WHG) includes bodies of water above ground, groundwater , coastal waters and marine waters as well as small bodies of water such as side ditches as part of roads, irrigation and drainage ditches or healing springs, regardless of whether it is a natural or artificial body of water is, flows or stands in a bed, is channeled underground in parts or flows wildly from a spring.

In the European Union (EU) according to Directive 2000/60 / EC (EU Water Framework Directive, WFD), the ecological status of rivers and surface waters (such as groundwater ) is analyzed according to various criteria and classified according to five grades: “very good “,“ Good ”,“ moderate ”,“ unsatisfactory ”,“ bad ”.

According to a report by the European Environment Agency published in 2018, two thirds of Europe's waters are not in good ecological status. In many small streams , strong pesticide loads are measured again and again, which in some cases far exceed the permitted limit values. 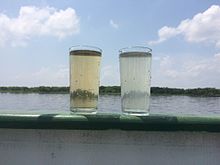 The pure water of a nutrient-poor, phytoplankton- poor body of water absorbs the short-wave ultraviolet and violet as well as the long-wave red spectral components of the incident light with increasing depth , so that the water appears bluish. In contrast, more nutrient-rich waters with phytoplankton appear greenish. On the other hand, calcareous waters, such as limestone lakes and partly the Alpine runoff, have a green to turquoise effect due to the calcium content.

Dissolved and suspended substances ( suspended matter ) such as iron and manganese compounds or humic substances cause a water body to turn brown and often reduce its transparency. In particular, iron (III) oxide hydrates (iron ocher) settle as a brownish precipitate, so they do not color the water, but rather the water bed. Iron compounds are also responsible for the red coloration of the “bloodstream” of the Antarctic Blood Falls .

Waters that carry suspended matter from clayey-silty limestone, loess or loam appear cloudy. The easiest way to tell the difference is where water with low and high levels of suspended matter converges, such as in the upper reaches of the Rhine.

Portal: Waters  - Overview of Wikipedia content on the topic of waters