The Ilz (in the upper reaches also Große Ohe or Schönberger Ohe ) is a left tributary of the Danube in the southeastern Bavarian Forest about 40 km long, on the main line with its upper reaches almost 70 km long .

Catchment area of ​​the Ilz (Danube)

The Ilz rises on the German side in the Bavarian-Bohemian border area in the Bavarian Forest National Park . Its source rivers Kleine Ohe (Grafenauer Ohe) , Große Ohe and Mitternacher Ohe come from the region between the mountains Rachel (1,453 m) and Lusen (1,373 m). They unite at the Ettlmühle not far from the village of Eberhardsreuth in the municipality of Schönberg . In the vicinity of Fürsteneck, the Wolfsteiner Ohe increases the water flow of the Ilz to more than double. The source rivers of the Wolfsteiner Ohe are the Reschbach and the somewhat larger Saußbach , their main tributary is the Osterbach.

The Ilz flows into the Danube in Passau , just a little above the mouth of the Inn opposite. Almost its entire length has been largely preserved close to nature . At the Kalteneck gauge , 18.9 km from its mouth in Passau, the Ilz has a long-term mean discharge of 16.1 m³ / s. At the mouth it is around 17 m³ / s.

lakes from the confluence of the upper reaches to the mouth. Selection with only a few indirect inflows. Partly with water length, catchment area and altitude. Other sources for the information are noted.

The confluence of the Great and Little Ohe also the first as the Great Ilz Schönberger Ohe mentioned Ilz at about 430  m above sea level. NHN shortly before the Ettlmühle von Grafenau .

Estuary of the Ilz from the left and finally northwest to about 291  m above sea level. NHN between Veste Niederhaus and Ilzstadt in Passau in the Danube . The Ilz is 40.3 km long from the confluence of the Großer and Kleiner Ohe, together with its main strand from the source of the Seebach on the Große Rachel over the Große Ohe it is even 69.4 km long and has a catchment area of ​​850.3 km² 11.2 km² in the Czech Republic, the rest in Bavaria.

The characteristic of the Ilz is its soft , brownish to blackish colored water. It is therefore also known as the black Ilz or black pearl of the Bavarian Forest.

The water of the Ilz reacts with the formation of germs to residual pollution from sewage treatment plants and agricultural runoff. In 1991 a bathing ban was pronounced throughout the Ilz, and in 1993 the Rettet die Ilz campaign was launched.

In 2001 the LEADER Clean Ilz initiative was concluded. The Ilz was declared the river landscape of the year 2002/2003. The then Bavarian Environment Minister Werner Schnappauf announced this on March 22, 2002 on the occasion of World Water Day .

Between the Oberilzmühle and the neck

The Oberilzmühle reservoir north of Passau dams the Ilz over 5 km to the lake. The Stadtwerke Passau built the Oberilzmühle hydroelectric power station here from 1951 to 1955 . At the castle ruin of Hals , the Ilz is dammed for the Hals power station once again over a distance of 1 to 1.5 km to the lake. In the 1970s there were plans for another reservoir near the Dießenstein castle ruins in the Saldenburg community . After around 40,000 citizens took part in a signature campaign in 1978, the plans were not pursued any further.

The drift lock at the neck

From around 1729 the expansion of the upper course for rafting began . 1788 Prince Bishops issued an extensive drift order . The drift from the inner Bavarian Forest to Passau took about six weeks, where a large wooden harbor was built on the Bschütt. The Triftsperre near Hals was built from 1827 to 1829 . From then on, a 115.5 m long, 3.2 m wide and 2.3 m high rock tunnel shortened the long way through the Halser river loop. Up to 100,000 sterling of wood were shipped there every year.

The large sawmills at Schneidermühl, Schrottenbaummühle and Fischhaus are also reminiscent of this type of timber transport, which only came to a standstill after 1945 when the forest roads were expanded. 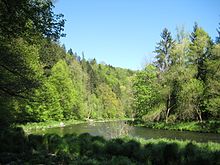 Ilz loop at the neck

It is estimated that the Ilz valley is populated by more than 20,000 different animal species. The river pearl mussel occurs in the Ilz , as well as the crayfish , which is missing in the dammed areas. The more undemanding American crayfish also lives in the Ilz. The Huchen is known as the "King of the Ilz fish" , of which remnants have been preserved. The kingfisher and dipper , which are replaced by newcomers from the north in winter, still breed on the banks . The common sandpiper also has a breeding population in the Ilz valley. The banded demoiselle is occasionally observed in the lower reaches .

In the area of ​​the failed reservoir project on the Dießenstein, the Ilz am Dießenstein nature reserve was created in 1981 after a protracted conflict of interests , which was renamed Obere Ilz in 1991 . It has a size of 380 hectares. Another nature reserve, the 91.5 hectare Halser Ilzschleifen nature reserve , was created on December 3, 1993 near Hals . Already on 20 February 1960, the reaching of Fürsteneck to Passau was protected landscape protection of the landscape part Ilztal in the area of the city and the district Passau built with a size of 1219.0 hectares.

In compliance with the rules for navigating the rivers in Bavaria (as of October / 2007), kayaks and canoes can be used to a limited extent or prohibited all year round in precisely regulated sections.

Current information is published by the Bavarian Canoe Association .

The Ilz also offers fishing opportunities. Fishing permits can be purchased for stretches of water near Passau, Fischhaus and the Grenzbächlein near the Dießensteiner Mühle . In addition, you can fish at the tributaries of the Ilz and at lakes and reservoirs in the catchment area of ​​the Ilz.

One of the target fish species is the huchen, which however has protection restrictions due to its rarity. A maximum of one huchen per angler per season may be caught, this must also be over 90 cm long.

In the catchment area of ​​the Ilz you can also fish for bream , tench , chub , nose , brook trout and rainbow trout, European grayling and white fish.

In general, there is pronounced tourism in the Ilztal as a recreational area in the Bavarian forest. The number of beds available is high compared to other regions.

From Niederalteich (on the Danube) via Hengersberg , Iggensbach , Schöllnach , Eging am See to Kalteneck, a total of 53 km, the Danube-Ilz Cycle Path leads, partly on a former railway line. Tourist bike paths lead from Kalteneck to Röhrnbach (10 km) and Passau (17 km). VCD , ADFC and Ilztalbahn have jointly published a cycle map with route suggestions.

The Ilz Valley is used by trains from the Ilz Valley Railway from Passau to Fürsteneck . These offer discounted bike transport.

Official online waterway map with a suitable section and the layers used here: Course and catchment area of ​​the Ilz
General introduction without default settings and layers: BayernAtlas of the Bavarian State Government ( notes )

River landscape of the year in Germany