Vascular plants are plants with the organizational form of the corm . They are thus made up of the three organs root , stem axis and leaf .

The key feature is the presence of real tracheids . These water-conducting cells have at least ring-shaped or helical thickenings, which are provided with lignin on the inside of the recent representatives .

Among the recent plants, the hornworts are probably the closest relatives of the vascular plants (see also land plants ). If fossil representatives are also included in the analysis, Aglaophyton major is the sister group of all vascular plants.

The vascular plants are divided into two groups in classical taxonomy, the seed plants and the vascular spore plants . However, the latter are paraphyletic , as the following cladogram shows:

Since the terms Euphyllophyta and Monilophyta, which are widely used today, are not properly described taxa, the classic structure is still used here: 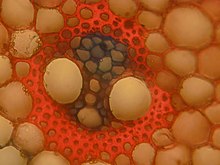 If fossil representatives are included in cladistic analyzes, the result is a somewhat more complicated picture, since there is a greater diversity, especially at the base of the vascular plants, than among the more recent representatives. Kenrick and Crane created the following cladogram for the basal vascular plants († denotes extinct taxa):

The most basic group are the Rhyniopsida , which the eutracheophytes face.

The clade of the eutrachophytes (3) within the vascular plants is characterized by thick, lignified ( lignin-containing ) wall layers in their tracheids . Another feature are the tiny dots between the wall thickenings or between the dots . The thickness of the lignified, rot-resistant wall layer is peculiar to the eutrachophytes. Other plants have no such wall layer or - like the Rhyniophyta - only a thin one. As another characteristic feature of which is Eutracheophyten Sterom cited: thick-walled, recalcitrant cell walls in the peripheral layer of the stem axis. The Rhyniopsida lack this feature. The opening mechanism of the sporangium is reduced to a single, well-defined slit.

This group contains all recent representatives of the vascular plants and also most of the fossil representatives. It contains two larger clades: the lycophytes and the euphyllophytes.

The lycophytes (clade 2) represent an extensive fossil and rich group, but only represent around one percent of the more recent plant species. They are characterized by laterally standing, often kidney-shaped sporangia. In the basal representatives, the sporangium opens into two equal halves by tearing the distal spore wall. Along this line there are cells with special cell wall thickenings. The xylem differentiation occurs exarch (from outside to inside), the xylem cord is often elliptical in cross section. The stem group outside of the Lycophytina is formed by some genera that used to belong to the Rhyniophyta: Cooksonia cambrensis , Renalia , Uskiella , Yunia and Sartilmania . Within the lycophytes there are two large groups: the zosterophyllopsida and bear moss plants (Lycopodiopsida). The latter also include the only recent taxa.

The Euphyllophyten make up the majority of the vascular plants with the ferns and seed plants. They are characterized by pseudomonopidial or monopodial branching. The side branches sit essentially spirally on the main axis. They have small, leaflet-like vegetative branches that are not in one plane in the basal taxa. The shoot tips are rolled up. The cells of the meta xylem are at least ladder tracheids . The sporangia are paired and are usually in terminal bundles. The sporangia open on the side with a slit. The xylem in the major axes is often arranged radially. These characteristics are often strongly derived from the recent representatives. In the recent members are Spermatozoiden originally vielgeißelig and they possess chloroplasts - genome greater inversion . The recent representatives form a natural family group, so are monophyletic .

The parent group of the Euphyllophyten form the two fossil genera Psilophyton and Eophyllophyton . The remaining representatives are divided into two large clades: the ferns and the clade leading to the lignophytes. Its sister group is the genus Pertica .

The lignophytes are characterized by secondary growth in thickness : they have a bifacial cambium , which forms secondary xylem , phloem and wood rays. Some aspects of the growth in thickness are similar to those of the Isoetales , the Sphenopsida and some Cladoxylopsida . With the genus Pertica they share the four-line position of the side branches and the special ontogeny of the protoxylem . The lignophytes comprise the extinct progymnosperms and the seed plants . The lignophytes are not generally recognized, since their characteristics occur in approaches also in other Euphyllophyten.