The conifers or softwoods (Coniferales, often also Pinales), also called pine-like, are the largest group of naked-seed plants still alive today . Their ovules are not protected by carpels . The sporophylls are often in cones , which is where the name conifers comes from, which means “cone carrier” (from Latin conus “cone, cone” and ferre “to carry”).

Coniferous plants are often pioneer plants that grow on soils that offer seed plants of other orders only inadequate growing conditions. On the other hand, coniferous plants are often displaced by them in good soils. There is a lack of coniferous trees in the tropical forests of Central Africa and the Amazon. In contrast, in high-altitude tropical rainforests, such as those found in Southeast Asia, there are conifers.

A particularly high number of coniferous species can be found in California , Mexico , China with the regions of Sichuan and Yunnan , in the Eastern Himalayas , in Japan and on Taiwan . New Caledonia is an island that is particularly rich in coniferous plants . Volcanic origin on islands such as Hawaii , however missing conifers because the seeds of most conifers about wind and Zoochorie spread is therefore only near volcanic coasts of islands lying origin can be naturally colonized. The short-leaved juniper found in the Azores is considered to be the coniferous plant that grows the greatest distance from the nearest coast. Ancestors of this species came to the island in the digestive tract of birds.

The coniferous plants living today are woody plants , most of the species are trees . The majority of the taxa have a monopodial habit, i.e. a main stem with side branches. The stature height of fully grown conifers ranges from less than a meter to over a hundred meters. The tallest growing species is the coastal redwood ( Sequoia sempervirens ); the tallest living specimen has a trunk length of 115.60 meters. The largest volume has a giant sequoia ( Sequoiadendron giganteum ), with 1486.9 cubic meters. The thickest conifer is a Mexican bald cypress ( Taxodium mucronatum ) with a trunk diameter of 11.42 meters. The oldest tree is a 5070 year old specimen of the long-lived pine ( Pinus longaeva ). Old Tjikko , a Norway spruce , is the oldest living individual clone tree at 9550 years old.

The structure of the crown of conifers is fundamentally different from that of deciduous trees . This occurs because the branches of the conifers are bent upwards towards the tip. The gradation of the increase in length of the branches results in a regularly conical crown, at least in younger trees. An umbrella-shaped flattening, as it occurs in pines, for example, only occurs with age.

The wooden stands in contrast to the cycads by narrow medullary rays ( "pycnoxyles wood"). In contrast to flowering plants, conifers never have tracheas, only tracheids . The wood is also very often rich in resins .

The leaves of most conifers are long, thin and needle-shaped. But there are also taxa with other leaf shapes, including most of the cypress family (Cupressaceae) and the stone slab family (Podocarpaceae), they have flat leaves. Some taxa, especially the Kauri ( Agathis ) within the Araucariaceae and Nageia within the Podocarpaceae, have wide flat leaves. Instead of leaves, the genus Phyllocladus has flat, leaf-like short shoots, so-called phyllocladia . In the majority of the coniferous plants, the leaves are arranged in a spiral around the branches; Exceptions to this are the Cupressaceae and a genus Podocarpaceae, in which they are arranged in opposing pairs or in three to four in whorls. There are sheet sizes from 2 mm up to 400 mm in length. Very long needles are characteristic of Pinus engelmannii , for example .

The stomata are arranged in lines or piles on the leaves. They can be closed in cold or very dry weather. In the majority of the genera, the leaves are evergreen and remain on the plants for several (2 to 40) years until they fall off. But four genera, namely larch ( Larix ), bald cypress ( Taxodium ), the golden larch ( Pseudolarix amabilis ) and the primeval sequoia ( Metasequoia glyptostroboides ) are deciduous ; they lose their foliage in the fall and are leafless during the winter. The seedlings of most conifers, including most of the Cupressaceae and the pines ( Pinus ), have juvenile leaves that are very different from the leaves of older plants.

The fertilization takes place by uncultivated sperm cells , which are transported to the egg cell through a pollen tube cell ( siphonogamy ).

The conifer seeds develop in a protective cone . The cones take four months to three years to mature. They are 2 mm to 600 mm long.

In the pine family (Pinaceae), araucaria family (Araucariaceae), umbrella fir family (Sciadopityaceae) and most of the cypress family (Cupressaceae) the cones are woody . When the cones are ripe, the scales usually open and let the seeds fall out so that the wind can spread them. A number of species shed their ripe cones, while in other species these remain on the branches. The latter includes, for example, the Monterey pine , in which cones are occasionally arched over by renewable wood.

The scales of the families of the stone slices (Podocarpaceae) and the genus juniper ( Juniperus ) of the Cupressaceae are soft, fleshy, sweet and brightly colored. They are eaten by birds, the seeds pass through the digestive tract and are excreted undamaged. The juniper species ( Juniperus ) are often colloquially referred to as berries, or better, berry cones, since morphologically they are not berries . In the head family (Cephalotaxaceae) and yew family (Taxaceae) the fruit scales are missing, the seeds are encased in a fleshy seed coat ( aril ).

For a long time the class Coniferopsida (or Pinopsida) contained only the only order Pinales. Today the order Gnetales is often assigned to it , although this assignment is not undisputed. Many molecular genetic studies saw the Gnetales as the sister group of the Pinaceae.

The recent representatives of the Pinales (excluding Gnetales) are:

There is a much greater variety of fossils within the conifers. Within the order Pinales there are the following extinct families in addition to the recent families:

The sister order of the Pinales is the order Voltziales , which is only known in fossil form .

The relationships between the individual families of the two orders were reconstructed by Farjon as follows:

Fossil cones from the Jurassic period

Among the fossil taxa of the Pinophyta division, two important groups should be mentioned, the Cordaites and the Voltcials . The Cordaites lived in the Carboniferous and Permian . They were up to 30 meters high, richly branched trees with lanceolate to ribbon-shaped spirally arranged leaves . The male " flowers " were cone-shaped with basal sterile scaly leaves and stamens with several pollen sacs . These were in the armpits of bracts on axles, which in turn were in the armpits of leaves. The female flowers were structured similarly, only that the terminal scaly leaves had atropic ovules .

The Voltziales (Upper Carboniferous to Lower Jura ) were also trees with needle-like to scale-shaped leaves. The stamens were stalked and flat at the end, where the pollen sacs mostly stood on the axially facing side. The female "flowers" had a bract designed as a cover scale, further sterile scale leaves and stalked ovules. As with the recent conifers, the female flowers of the Voltziales were in compact cones. They are considered to be the most similar and closest related group to the coniferous plants. 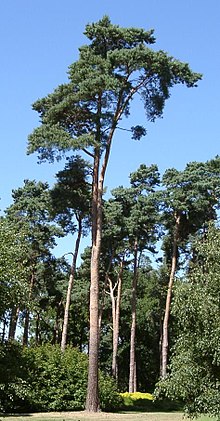 From the knowledge about voltcials, Rudolf Florin concluded that the ovules do not come from leaves, but are axially ( stachyosporia ). In addition, the seed scales of recent conifers (except for Taxaceae and Cephalotaxaceae ) are modified short shoots , since leaves do not have bracts (covering scales!).