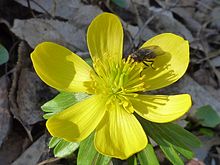 Open flower of the winterling ( Eranthis hyemalis ). In the center of the flower are numerous carpels that have not grown together.

The carpel (or carpel ) is (unlike the stamen ) the "female" leaf organ of the flower , which the ovules carries. So it is a megasporophyll . The term “carpel” should only be used for flowering plants. While in the naked samers the ovules are freely and directly accessible on the surface of the megasporophylls, in the bedecktsamern they are protected in a cavity created by folding and fusing the amniotic sac. Carpels and other parts of the flower later form the fruit surrounding the seed . The totality of all carpels of a flower including the ovules contained therein is called Gynoeceum .

Carpels are typically divided into a basal, congenitally fused (i.e. already tubular) area (ascidiate zone) and an overlying folded section (plicate zone), in which the lateral edges of the carpel only in the course of ontogenesis (postgenital) grown together. The adhesion leaves a seam (suture). The tissue areas that produce the ovules ( placentas ) are usually located along this seam on the inside of the carpel . The fertile section of the carpel with the ovules's ovary or ovary. Above the ovary there is usually a sterile section, the stylus . Its upper end, usually papillary, forms the scar (stigma). The stigma absorbs the pollen grains ( pollination ). Processes in scar tissue that are comparable to immune reactions are able to prevent certain pollen from germinating (e.g. to maintain self-incompatibility ). The germinating pollen tube is conducted from the style tissue to the ovules.