Flowers of Prunus avium ( sweet cherry ) with a few stamens that surround the central carpel. 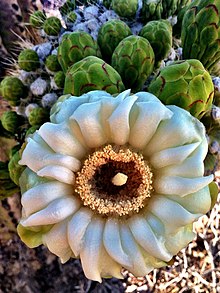 Carnegiea gigantea flower with many stamens

The microsphorophyll of the cover-seeded plants is called the stamen ( stamen , plural: stamina ) . It is the pollen- producing organ in hermaphroditic or purely male flowers, the covering plant. A stamen usually consists of a stamen (filament) and the anther sitting on it, which produces the pollen. The totality of all stamens of a flower is called the androeceum . The number of stamens in a flower can vary from one to around 4000, depending on the plant. Adansonia digitata , Annona montana , the Souarin nut tree and Carnegiea gigantea (over 3400) have very many stamens, 1500 and more . Most orchids and for example the Zingiberaceae , on the other hand, only have one stamen. The Marantaceae have only half a fertile stamen. 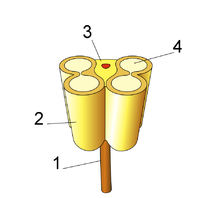 The basic structure of the stamen in the Bedecktsamern is relatively stable and is only rarely modified. However, the design of the filament and the anthers can vary in their phenotypic characteristics.

The supporting part of the stamen is the stamen. It usually starts directly on the flower base and can be free-standing, fused with other stamens or fused with the surrounding petal shell. The filament is usually narrow and thread-shaped, but can also be short and stocky. In rare cases it is completely absent.

The upper part of the stamen is the anthers ( anther ). It is usually divided into two halves, the so-called counters (singular: theka ). These are connected by a central tissue with vascular bundles, called connective. A theka usually consists of two fused pollen sacs, which are technically also referred to as loculamente; There are usually four pollen sacs per stamen. The wall of a pollen sac is almost always multi-layered: depending on the plant, an inner wall layer or fiber layer (endothecium) and an outer wall layer (exothecium) appear in addition to the epidermis as an externally closing tissue; one of these layers is rarely missing. As a result of the loss of water in the tissue layers of the exo- or endothecium, their cells tear open at a mostly pre-formed (preformed) point, creating a longitudinal tear in the pollen sac wall through which the pollen is released. The pollen sac wall closes off the inner cavity, the archespora , with a layer of tissue, the tapetum , which is perishable in angiosperms . This plays an important role in nourishing the pollen produced and, through the release of sporopollenin , in the formation of the pollen wall.

In most plants, the anthers are the vertical continuation of the filament. One speaks of a terminal anther. In individual cases, there are a number of modifications to this basic position, some of which have arisen through adaptation to the ecological environmental conditions.

Pseudoanthers can also occur; they are sterile and only serve to attract pollinators and do not offer any nectar or pollen. Also pseudo stamens occur, these are structures which mimic a stamen and partially serve as a substitute for presentation pollen (pollen secondary presentation).

When ripe, the anther opens (mostly in the longitudinal direction) by a cohesion mechanism (different tension conditions when the fiber layer and the epidermis dry out). Dry weather therefore favors the release of pollen. The pollen is finally transferred to the stigma for pollination by wind, insects, etc.

A staminodium (plural staminodes ) is a sterile or stunted stamen that has become sterile through evolutionary reduction (regression). The staminodium is a kind of rudimentary organ of the flower that does not produce any fertile pollen. It can also carry a sterile anther (antherode). With further reduction, the stamen can be completely missing. Using the example of the pharynx (Scrophulariaceae), a regression series can be set up, which can also be found in current textbooks (the latter two genera are, however, now counted among the plantain family according to new molecular biological studies ):

There are also pseudostaminodes , these are appendages between the filaments that appear like staminodes, or they come from other structures such as the petals or the flower base.

Under adynamandria , at- , autatrygia , one understands the inability of the male sexual organs of a flower to function or the sterility with its own pollen.

Nectar or honey leaves are stamens or petals that produce nectar and thereby attract insects . Nectaries can be present at the base of stamens (filament or stem nectaries) or as appendages. Whole staminodes can also be transformed into nectar leaves (staminodialnectaries).

Often, modifications of stamens and staminodes occur, which indicate a special pollination mechanism . In many species of the mint genus Salvia ( sage ) and in the species Hemigenia eutaxioides two of the four stamens form a joint. This is used to position the pollen more precisely on the body of the pollinator.

In the ginger family there is only one functional stamen, while transformed staminodes take on the function of petals.

Leaf-like appendages can form on the stamens. These are often vividly colored and can simulate a corolla ( secondary corolla ). Such flower transformations are typical of the spawn herb family . Such appendages are also present in the silk plants ( Asclepias ).

In heterostyly , a flower adaptation to make self-pollination more difficult or to prevent, stamens of different lengths appear on the different flowers of a plant species.

The filaments of the stamens can also be conspicuously colored and thus take on a viewing function for the pollinator. Examples are Calliandra , Mimosa (Fabaceae) and Callistemon (Myrtaceae).

Stamens can also respond to various stimuli and perform nastias . Such sensitive , irritable stamens have z. B. those of the genus Berberis , these are seismonastic. Or some kinds of the opuntia have thigmonastic stamens.

The stamens can be arranged in different ways:

If the stamens are different in length and shape, with different shapes, this is called heterandry. Heterantheria is not exactly the same, it is specifically related to the anthers (see also under Anther form), this is often confused.

Form of the connective

The connective can be designed in different ways

The shape of the anthers can be rounded, linear, oblong, curved, kidney-shaped (reniform), arrow-shaped (sagittate), sinuous (sinuous), with appendiculate, with process, with a hood (hooded), hairy, naked, bearing awns (aristate), lobed (lobed), leaf-like (laminar), X-, H-, S-shaped etc. The counters can also run into one another at the top or at the base or be fused together (confluent, adnate).

The anthers can be only a few tenths of a millimeter to several centimeters long.

If two different types of anthers are present, one speaks of heter (o) antheria (e.g. size, color, function, shape or temporal difference in pollen release); if all anthers are uniform, this is called hom (o) antheria . (See also under function)

Opening of the anthers

The opening ( dehiscence ), (bursting, popping open) (stomium) of the anthers can be done in different ways:

The terms introrse , extrorse , latrorse are not suitable to describe in each case to the direction of the pollen release of floral axis. Because depending on the cross section of the anthers and the bend of the filament, the pollen sacs can open in two different directions. In horizontally oriented flowers or in poricidal anthers, the pollen sacs can also open upwards or downwards (basal, apical, upwards, downwards).