The ginger plants (Zingiberaceae) are a family of the order of the ginger-like (Zingiberales) within the monocotyledons ( monocotyledons ). Depending on the source, this family contains 52 or 53 genera and is the most species-rich family of the Zingiberales with 1200 or more than 1300 species. Some species are used by humans as aromatic and medicinal plants , for example ginger , turmeric and citrus root . Many species are tropical ornamental plants . 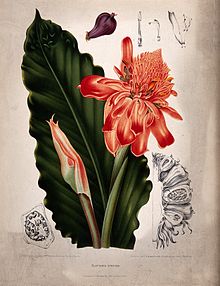 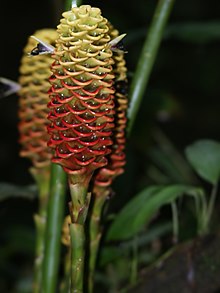 They are evergreen, perennial herbaceous plants . They form fleshy rhizomes that can be bulbous and thickened; in many species they form roots. They grow mostly terrestrial, rarely epiphytic . Only short stems are formed, which in many species are replaced by false stems , which are formed by the leaf sheaths of the leaves.

The alternate and two-line (distich) arranged leaves are never united to form basal rosettes. The position of the leaves also distinguishes the two families Costaceae and Zingiberaceae. The stalked to sessile leaves have a simple leaf sheath. The undivided leaf blades are herbaceous to leathery, with or without hair. In the budding stage, the leaf blade is rolled up lengthways. There is a raised midrib and parallel veins. The leaf margin is smooth. There are mostly ligules present. The lowest leaves are often greatly reduced, so that only the leaf sheath is formed.

The hermaphrodite flowers are threefold and zygomorphic . The perianth is double. The three sepals are fused into a relatively narrow tube that is open on one side, sometimes spathaähnlich acts or above tridentate or -lappig. The three petals are fused together at their base; the three corolla lobes differ greatly in length and shape, depending on the taxon. There are two circles with originally three stamens each. Only the middle stamen of the inner circle is fertile ; it has a long or short stamen . All other stamens are reduced to staminodes and at least one or three are missing. The two lateral staminodes of the outer circle are similar to the corolla or form narrow teeth at the base of the labellum, with which they can be fused or they are missing. The middle staminodium of the outer circle is always missing. The two lateral staminodes of the inner circle have grown together to form a so-called labellum ; it represents the most conspicuous part of the flower. Three carpels have become an under constant (syncarp) ovary grown, which may be mono- or dreikammerig, with more or less many ovules per ovary chamber. The very thin stylus is located in a furrow in the filament and the stigma is above the anthers .

The flowers secrete a relatively large amount of nectar from two nectaries located at the base of the ovary. The individual flowers wither quickly, usually they are open for less than a day. The pollination is done by insects ( Entomophilie ) or birds ( ornithophily ).

They form dry to fleshy capsule fruits to sometimes berry-like fruits that contain few to many seeds. The seeds contain starch. The straight embryo has a germ layer ( cotyledons ). The seeds have an aril , which is often lobed to fringed.

All species have excretory cells in their base tissue that contain essential or essential oils . It is silica in small spherical or disk-shaped bodies in lining cells or as siliceous sand in parenchymal cells accumulated . The number of chromosomes is usually n = 12 (9–26). 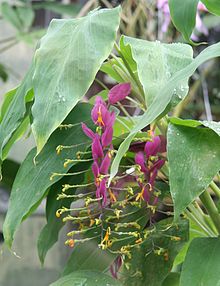 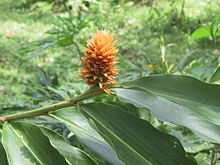 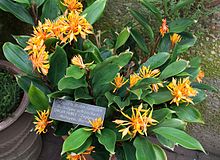 The mostly tropical species are mostly native to the Paleotropic and are mainly found in Southeast Asia and the Indonesian archipelago. Only from the genus Renealmia are species found in the Neotropic . Four genera occur in Africa: Aframomum , Aulotandra , Siphonochilus and Renealmia .

The family name Zingiberaceae was in 1820 by Iwan Iwanowitsch Martynow in Tekhno-Botanicheskīĭ Slovar ': na latinskom i rossīĭskom iazykakh. Sanktpeterburgie , p. 682 and published by John Lindley in Key Bot. , 69, September 1835 . The type genus is Zingiber Boehm. The generic name Zingiber is derived from a Sanskrit word sringavera and means horn-shaped, this refers to the rhizomes. Synonyms for Zingiberaceae Mart. are Alpiniaceae Link , Amomaceae J.St.-Hil. , nom. illeg., Curcumaceae Dumort. In the past, the taxa of today's Costaceae family also belonged to the Zingiberaceae family, but they are well defined by the lack of essential oils and the position of the leaves.

Subfamilies with tribe and genera

The ginger family (Zingiberaceae) is divided into four subfamilies and six tribe with about 52 to 53 genera and 1200 to more than 1300 species. In the largely Kress et al. In 2002 some genera are polyphyletic , for example Afromonum , Alpinia , Globba , Curcuma and Zingiber . This was followed by many new descriptions and changes in the scope of genres, which are documented with the respective literature: 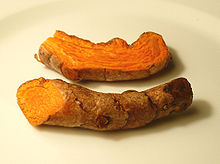 The Zingiberaceae family has a large number of species from 47 genera with medicinal potential. Some species are used as a spice, especially in Asian kitchens, especially the rhizomes. Few types are eaten as a vegetable or salad. Several types provide raw materials for the perfume industry. Varieties of many species are used as ornamental plants.