The Moluccas are an Indonesian group of islands between Sulawesi and New Guinea .

They cover an area of ​​74,505 km² with 2.1 million inhabitants. The capital of the region is Ambon . Administratively, the archipelago is divided into the two provinces of Maluku (Moluccas) and Maluku Utara (Northern Moluccas).

The Moluccas are nicknamed "Spice Islands" because spices were the basis of a profitable trade. The nutmeg tree was endemic to the Banda Islands to the south, and cloves to five small islands in the northern part . The Moluccas' monopoly on the cultivation of these spices was defended from 1512 after the establishment of European bases by the Portuguese and later by the Dutch East India Company , until it was broken by the French Pierre Poivre around 1769 .

The most important islands or archipelagos of the northern part ( Maluku Utara ) are:

The most important islands or archipelagos of the southern part ( Maluku ) are:

The population consists mainly of Malays and also smaller ethnic groups with Melanesian and Papuan roots, which were previously referred to by the collective term Alfuren . The high proportion of Christians has meanwhile declined due to the numerous Islamic immigrants from other parts of Indonesia (see also “ Transmigrasi ”). 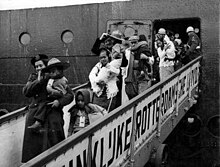 Arrival in Rotterdam in 1951

The Moluccas were settled tens of thousands of years ago. Between 10,000 and 2000 BC The Austronesian expansion reached the islands. The trade in spices was already practiced by the indigenous people. The inhabitants of the smaller volcanic islands exchanged nutmeg and cloves for palmsago from the larger islands, such as Halmahera and Seram. The Bugis imported these spices to Java and Sumatra, from where they were transported to China, India and Europe.

The first European bases were established in 1512 by the Portuguese who wanted to control the spice trade from here to Europe as part of the Indian trade . In 1529, Spain and Portugal established a dividing line in the Pacific in the Treaty of Saragossa ; the Moluccas were declared under Portuguese influence.

In 1663 the Moluccas came into Dutch possession. During the war with Napoleon , the Dutch possessions were occupied by Great Britain (1796–1802 and 1810–1816). During the Pacific War , Japan occupied the islands, which after the end of the war became part of Indonesia against the will of the population.

In 1950 the Christian part of the population in the southern Moluccas proclaimed the independent Republic of Maluku Selatan . The attempt at secession was suppressed by the Indonesian army by force of arms. Tensions between Muslims and Christians persisted underground.

Since 1999, starting in Ambon, there has been heavy fighting between Muslims and Christians, which escalated after the arrival of thousands of Islamist fighters from Java and led to pogroms , massacres and expulsions on almost all of the Moluccan islands. The Indonesian military was unwilling to keep order. The number of (mostly Christian) deaths is estimated at 10,000. Only in autumn 2002 did the situation calm down relatively; it remained tense until 2005 as the violence flared up several times.

Moluccas in the Netherlands

Hijacked train at Wijster on day 12

The provincial administration building in Assen the day after

1951 arrived in the port of Rotterdam on a group of people from the Moluccas, the Molukkers is called. They were former employees and soldiers of the Dutch colonial power, who were no longer welcome as collaborators in the Moluccas after the Indonesian War of Independence . The idea of ​​taking in these people temporarily was, however, linked to conditions. Because of some privileges, the Moluccas were not treated equally by the Dutch society, but in camps such as the former Herzogenbusch concentration camp and Westerbork transit camp as well as in camps in Zeeland and the like. a. housed in west chapel . They were later settled in some neighborhoods in the country that often developed into socially disadvantaged areas . At first 13,000, later around 35,000 people, in addition to another hundred thousand inhabitants from the former colony of the Dutch East Indies . Especially in the younger generation, anger accumulated over poor future prospects: little chance in the Netherlands, but also no prospect of a return.

The first armed action by the Moluccas was the occupation of the Indonesian embassy in Wassenaar . In the early morning of August 31, 1970, 33 heavily armed youth members of the Moluccas broke into the representation. The ambassador and the employees present were arrested. A Dutch security guard was shot dead. They surrendered late that afternoon. After speaking with the ambassador, they concluded that their goals had been achieved. They had received attention for their situation and the planned state visit of Indonesian President Suharto was postponed. The hostage situation ended after about twelve hours. The juveniles only received sentences of between four months and three years. The judge showed understanding for the situation of the Moluccas in the Netherlands. They were celebrated as heroes within the Moluccan community.

On May 23, 1977, a dramatic hostage-taking took place near De Punt in the municipality of Tynaarlo in a train hijacked by South Moluccan terrorists . This was forcibly ended three weeks later, on June 11th, by the intervention of a special command of the Mariniers Corps . Six of the southern Moluccas and two passengers were killed. At the same time, four armed Moluccas took 105 school children and five teachers hostage for days in Bovensmilde .

On March 13, 1978, the building of the Assen Provincial Administration was occupied by three South Moluccas and 70 people were taken hostage. The officer Ko de Groot was executed by the terrorists while attempting to arbitrate. The hostage-taking was violently ended the next day. The MP Jakob "Jack" Trip was injured and later succumbed to his wounds.

The Satudarah MC Maluku, a large Dutch rocker club with international chapters, was founded in 1990 by Moluccas. The MC was banned in Germany in February 2015 and in the Netherlands on June 18, 2018.

The acts of violence made the Moluccans' reputation even worse. With increasing integration, especially among the younger generation, tensions have eased since then.

Islands and archipelagos of the Moluccas