Melanesier is a term coined by the French explorer Jules Dumont d'Urville for the inhabitants of New Guinea , New Caledonia , the Solomon Islands and (formerly also for the native people of Australia) .

A man from Port Vila , Vanuatu

The term "Melanesians" is controversial today because it implies the existence of a homogeneous Melanesian ethnic group . In the first place, however, it has established itself as the self-designation of the above-mentioned population groups in the cultural area of Melanesia (around ten million people). In today's use of the term, the indigenous peoples of the following islands are counted among the Melanesians: Fiji , New Guinea ( Papua New Guinea and the Indonesian West New Guinea ), New Caledonia, the Solomon Islands and Vanuatu . However, the Melanesians are extremely diverse culturally, ethnically and linguistically. Genetically, they are more related to the Australian Aborigines than to the Polynesians who migrated through their territory .

In early demarcation of the Melanesians from neighboring population groups, in addition to dark skin color ( melas = Greek "black") or hair, some characteristics also played a role that would be described as racist today , such as "hostility towards whites" and "ugliness of their wives " Etc. 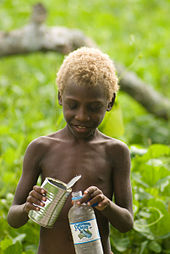 A Melanesian boy from Vanuatu

The Melanesians and the Australian Aborigines are the only dark-skinned ethnicities that can have blonde hair. A certain surface variant of the red blood cells is strikingly common in Melanesians. It seems to protect people from malaria infections. In May 2010 a study was published which showed that the Melanesians' genome - like that of all non-African people - comes from 2.5 ± 0.6 percent of the Neanderthals ; however, an additional 4.8 ± 0.5 percent were contributed by the Denisova people . However, the latest data from 2016 suggest that the Melanesians' genome contains significantly less Neanderthal DNA than that of other non-African people.

The ethnic religions of the Melanesians are just as heterogeneous as all other cultural elements. However, there are some common basic elements found in most of these religions. The spiritual worship of cultivated plants, creation, transience and fertility play primary roles everywhere, even if very different ideas are connected with them.

The world of spirits is divided in two into nature and ancestral spirits . Ancestor cult is at the center of religious practice . It must not be confused with a simple veneration of the dead , because it is not only about the souls of those who have just died, but about all the dead who, like living elders, are venerated as still existing. The hereafter is not seen as categorically different, but merely as the next higher level of existence. As usual in ethnic religions, belief reflects - or confirms - the socio-cultural conditions of society. Ancestor worship is about respect for elders, who have a particularly high status . In some areas, elaborate funeral celebrations are held, where carved figures and friezes are built. In the religions of New Guinea , in addition to the worship of the dead and ancestors, there is also the ritually significant headhunting, which is sometimes associated with artistically designed head trophies. Headhunting has largely disappeared today.

Numerous cultural heroes as well as good or bad spirits appear in the myths . The creation and influencing of the world can be traced back to primeval creator beings, who have determined the cycle of life and death since primeval times.

Everyday life is determined by adherence to religious regulations and social norms. Here are taboos and sacrifice important. The concept of mana , the divine power transferable to humans, is a fundamental concept throughout Oceania. In principle, every individual can come into possession of mana and is thereby legitimized to perform religious functions.

The Melanesian religions know neither priests nor other religious officials. Instead, there are cultic secret societies that preserve religious knowledge and conduct initiation rites. In addition, they often take on important tasks in the social order. Admission to such secret societies is only possible after difficult exams. Masks often play an important role in the ceremonies of these leagues, for which there are often special men's or cult houses.

In particular, the missionary work and frequent contact with soldiers during World War II triggered a cultural change that was often expressed in the so-called cargo cults , some of which still exist today. It is about the idea that goods of western culture were originally created by the ancestors for the Melanesians, which through certain cults and ceremonies can now be passed on to the right recipients.

With the few isolated peoples of New Guinea and some very remote traditional societies on the island, the ethnic religions have survived to this day. However, the Christian mission tries hard to convert people. On the other islands this process is consistently advanced, so that most of the people are officially Christians today. Although worship, community work and church festivals are part of everyday life, ancestor worship, the idea of ​​mana and belief in spirits, creators and cultural heroes have been preserved in many areas.