At Mount Yasur on Tanna

Vanuatu ([ vɑːnʊˈɑːtuː ], in Bislama : Ripablik Blong Vanuatu ) is a sovereign island nation in the South Pacific .

The island state consisting of 83 islands - or archipelagos - emerged in 1980 from the British - French condominium New Hebrides , which had been in existence since 1906 and today has around 267,000 inhabitants.

The island area of ​​Vanuatu extends over 1,300 km of the South Pacific and is part of Melanesia . The state includes 83 islands (67 of them inhabited islands), mostly of volcanic origin, which mostly belong to the New Hebrides archipelago . The Bank and Torres Islands also belong to Vanuatu.

Few of these Vanuatu islands are of a size that makes them significant. The largest islands are Espiritu Santo (3955.5 km²) and Malakula (2041.3 km²). The highest point on Vanuatu is the Tabwemasana (Tabwémasana) with 1879 m on the island Espíritu Santo.

Noteworthy is the active volcano Mount Yasur on the island of Tanna and the Lombenben on the island of Ambae , which was active in November 2005. Earthquakes repeatedly shake the islands, including in 1999 and 2002. The latter caused considerable damage in the capital Port Vila . Both earthquakes each resulted in a tsunami .

Many of Vanuatu's islands have been populated for thousands of years. The oldest finds are dated to the year 2000 BC. Dated. The Portuguese navigator Pedro Fernández de Quirós reached Espíritu Santo on May 3, 1606. Believing to have found the "lost" southern continent, he named the island after the Holy Spirit Terra Australis del Espiritu Santo and conquered it (and everything up to the South Pole) in the name of the Spanish king and the Catholic Church.

In 1768 Louis Antoine de Bougainville sailed on the frigate La Boudeuse between Espíritu Santo and Malakula , refuting Quiró's theory that it was part of a southern continent.

After the second voyage of the British explorer James Cook , European settlers settled on the islands from 1839 onwards. From 1887 the islands were officially under British-French rule.

Due to various infectious diseases that were brought into the country mainly by the European settlers, the population fell to 45,000 by 1935.

During the Second World War , the islands of Éfaté and Espíritu Santo were used by the Allies as military bases . In the 1960s the population pushed for more self-determination and later for independence. Before independence, active and passive women's suffrage was guaranteed in November 1975.

The island state achieved full sovereignty on July 30, 1980 with the approval of the two European protecting powers. The right to vote for women was confirmed when independence was achieved .

The 1990s were marked by political instability, which led to greater decentralization in the island nation's political system.

Between March 14 and 15, 2015, Cyclone Pam raged in Vanuatu , destroying large parts of the island state, which is why the island state declared a national emergency on March 15, 2015 . With wind speeds of more than 300 km / h, the cyclone was one of the strongest cyclones ever measured.
In the capital Port Vila, 90% of all buildings were destroyed or badly damaged.

The cyclone is said to be the worst disaster in Vanuatu's history. According to the United Nations, at least 24 people were killed in the cyclone and 3,300 people were left homeless. President Baldwin Lonsdale gave the climate change partly to blame on the extent of the destruction.

Vanuatu is a parliamentary republic with a president as head of state. The President, who has mainly representative functions, is elected every five years by a joint body made up of Members of Parliament and the Presidents of the Regional Parliaments. Baldwin Lonsdale of Torba Province was President of the country from September 22, 2014 until his death . His election required eight ballots until he achieved the necessary two-thirds majority with 46 of 58 votes. He replaced Iolu Abil , who was in office from September 2, 2009 to September 2, 2014, and his then acting interim president, Philip Boedoro . He was succeeded by Baldwin Lonsdale, who is respected in the region, in July 2017 by Tallis Obed Moses .

Prime Minister since April 20, 2020 is Bob Loughman . He replaced Charlot Salwai , who had been in office since 2016.

Vanuatu has a unicameral system . The parliament has 52 members who are directly elected every four years in multi-member constituencies. The Prime Minister can have the President dissolve Parliament early.

In addition to the parliament, there is the Malvatu Mauri , also known as the National Council of Chiefs . This chief council only has an advisory function.

Vanuatu's supreme judicial body is the Supreme Court, which consists of a chief judge and up to three other judges. The legal system is based on UK law.

The small Matthew and Hunter Islands , which are about 250 km southeast of Anatom ( Tafea Province ), the southernmost main island of Vanuatu, are claimed by both New Caledonia ( France ) and Vanuatu.

Vanuatu has no regular armed forces . In addition to the police ( Vanuatu Police Force ), the paramilitary Vanuatu Mobile Force , which also has a maritime arm, the Police Maritime Wing, is responsible for security . Vanuatu security forces have already participated in United Nations operations .

Vanuatu consists of the six provinces Malampa , Penama , Sanma , Shefa , Tafea and Torba , whose names are composed of the names of the individual islands. 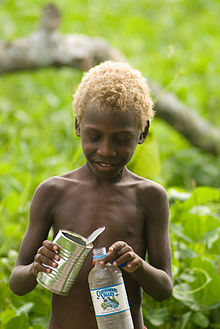 72.6% of the population state that their mother tongue is one of the 110 languages ​​of Vanuatu. With this amount of languages, Vanuatu has the highest language density (languages ​​per inhabitant) in the world. All of these languages ​​belong to the Melanesian branch of the Oceanic language group . Bislama , a Creole language that emerged during the British-French colonial era , is given as the first mother tongue by almost 23.1%; In fact, it is the daily language of the island nation's inhabitants. In addition to Bislama, English and French are also official languages, but are rarely spoken actively: English is spoken by 1.9% of the population and French by 1.4%. Other languages ​​are spoken by 0.3% of the total population.

In the past, residents without a common language communicated through drawings drawn in the sand. Ritual sand drawings , which consist of a continuous line, were recognized by UNESCO as a cultural heritage of humanity in 2003.

31.4% of the population belong to the Presbyterian Church and 13.4% to the Anglican Church . 13.1% of the population are Roman Catholic , 10.8% are Seventh-day Adventists and 13.8% belong to another Christian denomination. There are also a number of indigenous faiths, to which only 5.6% of the total population profess. The most important are cargo cults like the John Frum Movement and the Prince Philip Movement . (All demographic information is current from 2006.)

The economy of Vanuatu consists mostly of agriculture, tourism and fishing . Fishing plays an important role in supplying the population. This is one of the reasons why Vanuatu is a member of the South Pacific Regional Fisheries Management Organization ( SPRFMO ), an international, intergovernmental organization of 15 members that aims to monitor and manage fish stocks in the South Pacific.

Cattle and pigs are kept on some farms, which in 2010 produced 2,500 tons of beef and 3,417 tons of pork. Occasionally, coffee (2011: 25 ha), cocoa (2011: 500 ha) and spices (2011 on seven hectares with a yield of 95 t) are grown. Despite an expanding service sector , the economy is still strongly characterized by agriculture and is therefore susceptible to natural disasters and weather fluctuations. There are no significant natural resources.

About 65% of the population make their living from the primary sector . Various economic reforms such as the introduction of a VAT of 12.5% ​​succeeded in strengthening the service sector so that tourism could expand further. In 2011 there were approx. 94,000 visitors. 125,000 day visitors reached the islands on cruise ships.

On January 28, 2016, the EU Commission presented a package of measures to combat tax evasion , including Vanuatu on the black list of tax havens .

With the Citizenship Tourism Investment Program (CTIP) Vanuatu tries to attract people to invest in the country. In 2020, more than 650 people took the opportunity to acquire citizenship of Vanuatu at approved agencies for 130,000 USD (around 110,000 euros) each by mid-August , 32% more than in the whole of 2019. Each 80,000 USD is paid directly as a fee the state and the agencies pay taxes on their revenues. Despite the slump in tourism in the wake of the corona pandemic and the destruction caused by Cyclone Harold, the state achieved a surplus of 3.8 billion Vatu (28.4 million euros) in the first half of 2020. The green passport with the Vanuatu coat of arms and the state motto is also popular because it allows holders to enter more than 100 countries without a visa, including those of the European Union, Great Britain, Russia and Hong Kong. Few of the "buyers" of citizenship actually settle in or invest in the country as a result.

Four Chinese people who were searched for by Interpol were revoked their citizenship in 2020, they were arrested, isolated and extradited to China. They should at Plus tokens have been involved, a fraudulent pyramid scheme with crypto currencies .

They were arrested in Vanuatu along with two others whose naturalization procedures were pending, detained for a week without any contact with the outside world and extradited to China, the Guardian reported. They are said to have been involved in the "PlusToken" operation, a fraudulent pyramid scheme with cryptocurrencies.

The operators of the Sharman Networks Kazaa network have settled there in order to avoid proceedings in the Netherlands and to benefit from tax advantages. Also WinMX , a peer-to-peer software and the OnlineTVRecorder changed their location there.

The almost 1,000 kilometers long Vanuatu transport network consists of 75% unpaved roads and paths. There is no general speed limit on the streets of Vanuatu. A total of 31 airfields are available on Vanuatu to cover medium and long-haul routes, three of which have asphalt runways . One of the main airports is Bauerfield Airport . The national airline is Air Vanuatu . The merchant navy has around 50 ships, none of which has a domestic owner. Larger ports are located in Forari , Port Vila and Espiritu Santo . 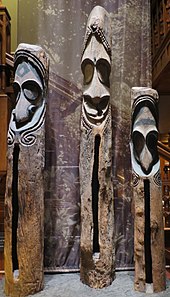 Wall paintings opposite the market hall

The Chief Roi Mata's Domain cultural landscape has been a UNESCO World Heritage Site since 2008 . The sand drawings , which used to be used for communication between the individual islands and tribes, have also been recognized by UNESCO as a World Heritage Site.

One of the most important contemporary artists of Vanuatu is Aloi Pilioko from the island of Wallis , who u. a. created the colorful relief on the facade of the main post office in Port Vila. Not far from there is an interesting mural on the facade of the administration building opposite the market hall.

A shortwave station that broadcasts a domestic program in English, French and Bislama with 10 kW can occasionally be received in Central Europe if reception conditions are favorable. The transmission frequencies are: 3,945, 5,055 and 7,260 kHz.

The top-level domain of Vanuatu is .vu . Vanuatu earned more than 42 million euros from the sale of the .vu domain.

Political division of Australia and Oceania

Members of the Pacific Islands Forum

Provinces and main islands of Vanuatu