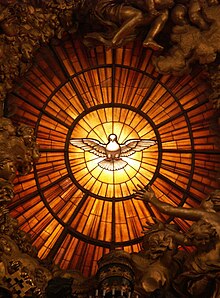 The Holy Spirit ( ancient Greek ἅγιον πνεῦμα hágion pneûma or πνεῦμα τὸ ἅγιον pneûma tò hágion , Latin Spiritus Sanctus ) is in Christianity one of the three persons of the divine Trinity , as it was formulated in the Nicene-Constantinopolitan confession, an important ancient church. The Holy Spirit, often called the Spirit of God , is God , not a separate deity or substance. At Pentecost , Christianity celebrates the coming of the Holy Spirit. The Spirit of God is already mentioned in the Old Testament .

The Holy Spirit in the Bible

The concept of the spirit, which was initially applied to people, was transferred to God in accordance with the human-like conception of God ( Isa 40:13  EU ). Only very rarely does the Tanach emphasize the spirit's belonging to God by using the attribute “holy” ( Ps 51.13  EU ; Isa 63.10f.  EU ; Weish 1.5  EU ); mostly he speaks of the “Spirit of God”: ruach YHWH - “Breath of the Lord”; ruach ha-Elohim - "God's breath"; ruchaká - "your breath". These expressions denote the powerful presence of God in people's lives. The term “Spirit of God” is particularly related to Israel and the prophets , but also applies to all of creation .

In Isaiah 63.14  EU , “the Spirit of the Lord” appears immediately next to “his Holy Spirit” (ruach qodesho) .

Further statements can be found in the Apocrypha , especially in the wisdom literature .

In the Greek New Testament the term “Holy Spirit” (πνεῦμα ἅγιον pneûma hágion ) appears around a hundred times. In the Gospel of John he is also called Paraclete (παράκλητος, "Comforter", "Advocate"). In particular, the following passages are of greater importance in the theology of the Holy Spirit :

Christianity has also related various Old Testament passages to the Holy Spirit, in particular the prophecy that God will pour out his Spirit on all people in Joel 3: 1-5  SLT ; and the mention in the creation story : "God's spirit hovered over the water" ( Genesis 1,2  EU ). In the further course of the biblical story, it was individual persons who, according to Christian interpretation, were particularly filled with the Spirit of God, e. B. Joshua ( Dtn 34.9  EU ).

Understanding of the Holy Spirit in different religions

Ruach HaQodesh , ( Hebrew רוח הקודש ruach ha-kodesh ) literally “breath of the holy”, “holy wind”, meaning the holy breath (= spirit) , also referred to as Ruach YHWH (“breath Adonais ”), is used allegorically in the Tanach . In Judaism, the Holy Spirit is viewed as the power of God, not as a divine person, and accordingly is not called upon as a person. This power can possess and empower people.

With regard to the gender problem , an analysis of the Old Testament by Manfred Dreytza (1998) showed that the word Ruach appeared there a total of 387 times, in 200 cases it was used in a grammatically feminine sense, in 63 cases in a masculine form, the rest remained not clear.

It was rabbinical literature, the origins of which lay in the Pharisaic movement and which became more and more differentiated after the Jewish-Roman war , the conquest of Jerusalem in AD 70 and the destruction of the Second Herodian Temple and which the relationship from the Ruach HaQodesh and the Jewish prophet. In Sota u. a., a treatise of the Mishnah , it is stated that the Ruach HaQodesh with the prophets Haggai , Zechariah and Malachi have disappeared from the people of God. According to the Pharisaic scholar Hillel , the Ruach HaQodesh can rest on the people of Israel as a whole. In the Midrash it is repeatedly held that everyone can grasp the 'holy breath' ( Tanna de-be Elijahu 10).

The Old Church went a long way in doctrinal development also with regard to the Holy Spirit; the discourse was reflected in the early church confessions.

In Christianity the Holy Spirit is "one" with God the Father and God the Son and is at the same time one of the three persons or hypostases of God, respectively. understood as the third person of the Triune God (see Trinity ). Before the establishment of the Trinitarian dogma , this was controversial, especially among the Pneumatomachen group in the 4th century. Holy is used in the sense of divine to distinguish the spirit of God from other spirit beings.

The Christians of almost all churches celebrate Pentecost 50 days after Easter as the day on which the disciples of Jesus were “filled with the Holy Spirit” ( Acts 2,4  EU ) and were authorized to preach the Gospel ( Acts 2,11  EU , Acts 4 , 8-10  EU ).

The so-called Filioque dispute, i.e. the dispute as to whether the Holy Spirit emanates from God the Father or from God the Father and God the Son, was a decisive disagreement between the Eastern and Western churches and still represents an important dogmatic difference between the Roman Catholic Church today and the Reformation churches that grew out of it on the one hand and the Orthodox churches on the other. The Western Church generally adheres to the filioque , thus emphasizing the origin and origin of the Holy Spirit by means of a breath from God the Father and God the Son. The Eastern Church retains the original version of the Nicano-Constantinopolitanum and emphasizes the divinity of the spirit, which is equal to God-Father and God-Son.

The coming out of the Holy Spirit from the Father and the Son; Altarpiece from Saint-Marcellin , Boulbon (Provence, around 1450; now in the Louvre )

Like the Orthodox churches, the Roman Catholic Church knows the sacrament of Confirmation . In it the confirmant receives the seven gifts of the Holy Spirit , which are to produce its fruits . Confirmation is usually donated to young people by a bishop , in contrast to the Orthodox churches, where it is donated immediately after the baptism by the priest , and the adult catechumens , to whom all three sacraments of initiation are usually donated in a single celebration.

The Anglican Church emerged from the Western tradition; her credo therefore contains the filioque. With a view to Orthodoxy and after the preparatory resolutions of the Lambeth Conference in 1978 and 1988, the primates of the various church provinces decided in 1993 that the filioque should no longer be used in future editions of liturgical books. The American Episcopal Church made the same decision in 1994. Both resolutions were inconsequential.

In the Anglican Church too , confirmation is given by the bishop by the laying on of hands, so that the confirmant is strengthened in the Holy Spirit.

From their common roots, the Protestant churches are shaped by the Filioque in a similar way to the Catholic Church.

In ecclesiastical practice, the action of the Holy Spirit plays a central role in confirmation , which since the Ziegenhainer Zuchtordnung of 1539, influenced by Martin Bucer , has started its triumphal march through the Protestant regional churches from Hesse.

Movements that emerged from Reformation Christianity and strongly emphasize the experience of the Holy Spirit and the teaching about him are the Pentecostal Movement from 1906 (see below) and the Charismatic Renewal Movements since the 1960s .

In the 20th century, new communities were formed in the Protestant sector, most of which became independent; these events are collectively referred to as the Pentecostal Movement , especially in the United States. In the meantime, they are seeing the greatest influx of members in Africa, Asia and South America. The work of the Holy Spirit is understood in them to be anti-hierarchical. Therefore, the local communities are independent and autonomous. The following are emphasized:

Some denominations speak of sealing with the Holy Spirit instead of anointing or confirmation ( Catholic-Apostolic Congregations , New Apostolic Church ).

Christian denominations that do not believe in the dogma of the Trinity ( non- trinitarians ) see the Holy Spirit not as a person, but as God's working force.

The doctrine of the Trinity, which is represented by almost all Christian denominations, is a main point of criticism from an Islamic point of view, as it contradicts monotheism according to Islamic understanding. In sura 4: 171:

“You people of the Scriptures! Don't go too far in your religion and say nothing against God but the truth! Christ Jesus, the Son of Mary, is only the Messenger of God and his word, which he gave to Mary, and Spirit from him. Therefore believe in God and his messengers and do not say (of God that he (is) in one) three! Stop (saying something like that)! This is better for you. God is only one God. Praise be to him! (He is above) having a child. Everything that is in heaven and on earth belongs to him. And God is enough as trustee. "

The concept of the Trinity in Christianity is often misinterpreted by the Islamic side as a 'God trinity', consisting of the Creator, Jesus and Mary. Therefore it represents a shirk (addition of another being to God), which corresponds to a belief in many gods .

The Ruh al-Qudus often identified with the 'Holy Spirit' ( Arabic روح القدس Ruh al-Qudus) is mentioned a total of four times in the Koran, where it functions as a means of divine action or communication and therefore not with the Holy Spirit of 'Trinitism' is identical. So in Suras 2, 5, 16 ( al-Baqara ayah 87, al-Baqara ayat 253, al-Māʾida ayah 110 and an-Nahl ayah 102).

The Muslim interpretation of the Holy Spirit is generally consistent with other interpretations, such as those of the Torah and the New Testament . Furthermore, the Koran refers to rūḥ as Ruh al-qudus (Arabic روح القدس, "the holy spirit" "or" spirit of holiness ") and al-Ruh al-amin (" the faithful or trustworthy spirit ").

According to the Sunni view of Islam, the archangel Djibril is also called Ruh al-Qudus  /روح القدس / Called 'Spirit of Holiness'. Compare the Islamic view of the Trinity and Gabriel (Archangel) .

In Shiite Islam, Ruh al-Qudus is described as something more powerful than Archangel Djibril or Archangel Mika'il . This Ruh al-Qudus was sent to Muhammad to inform and guide him. In some Shiite traditions, Ruh al-Qudus is seen as one of the five spirits by which an imam is inspired. In contrast to the other four spirits, he was always vigilant and available to inform the Imam on any subject. There is disagreement about whether Ruh al-Qudus is an angel.

There are parallels to the concept of the Holy Spirit in other religions. The concept “ Hagion pneuma ” can be found in a very similar form in pre-Christian times in Greek and ancient Indian religious and philosophical treatises.

The shamanic pantheon also knows the highest spiritual beings among some peoples, to which all other spiritual entities are subordinate. However, this is not always the case with the various North and Central Asian peoples.

The most influential text on the Holy Spirit at all is the late writing by Basil of Caesarea , which comprises 79 chapters, Peri tou hagiou pneumatos ("on the Holy Spirit"). Other important texts of the early Church are the fifth theological discourse On the Holy Spirit of St. Gregory of Nazianz and De Trinitate of the Church Father Augustine .

There are numerous hymns in which the Holy Spirit is addressed directly, for example Nunc sancte nobis spiritus of St. Ambrosius , the Pentecost sequence Veni Sancte Spiritus (Come down, o Heilger Geist) , Komm, Schöpfergeist or the Veni Creator Spiritus by Rabanus Maurus , Come, Holy Spirit, Lord God after the Pentecost Veni Sancte Spiritus, imple tuorum corda fidelium , continued by Martin Luther , come to your gates by Paul Gerhardt , consecration to the Holy Spirit (after Pius X. ), or Holy Spirit, the victory is yours (by Pius XI.).

Symbols for the Holy Spirit 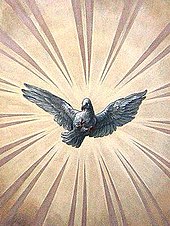 Depiction of the Holy Spirit as a dove (ceiling painting in the Karlskirche in Vienna , by Johann Michael Rottmayr , 18th century)

Thomas C. Oden lists the following New Testament symbols and metaphors for the Holy Spirit that have been found in the writings of the Church Fathers and Doctors :

The most comprehensive compilation of the attributes of the Holy Spirit can be found in the Father of the Church, Basil the Great .