Gifts of the Holy Spirit 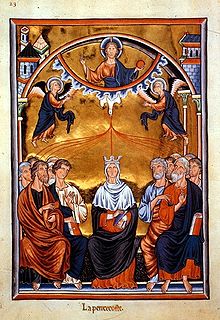 Outpouring of the Holy Spirit, illumination from the Ingeborg Psalter (around 1200)

Bible passages on the gifts of the Spirit

When using the various spiritual gifts, the apostle emphasizes the indispensability of love ( agape ) ( 1 Cor 13 : 1-3  EU ). In the following chapter he describes the gift of prophecy as particularly worthwhile:

“Chase after love! But also strive for the gifts of the Spirit, especially for prophetic speech! "

Spiritual gifts in theology and hymns of the Middle Ages

Stained glass of the Trinity Cathedral in Dublin depicting the seven gifts of the Holy Spirit with wisdom at the center according to Isa 11.2  EU . Executed by Hardman & Co. in London in the 1870s.

Hymn after Rabanus Maurus in the 9th century

The gifts of the Holy Spirit are referred to in the Pentecostal hymn Veni, creator spiritus, handed down by Rabanus Maurus as "septiformis" (the following text corresponds to the original assumed by Dreves and Blume):

O treasure that adorns sevenfold,
O finger of God, who guides us,
gift promised by the Father,
you who make the tongues speak.

Stephen Langton of Canterbury also sings about the sevenfold faculties of the spiritual gifts in the last section of his Pentecost sequence Veni, Sancte spiritus :

Holy Spirit, we ask you,
graciously give us all
your gifts of seven.

Give us the reward of virtue,
let us stand by your throne,
rejoice in the heavenly hall.

In 1267 the doctor of the church Johannes Bonaventure published his work On the Seven Gifts of the Holy Spirit (Collationes de septem donis Spiritus sancti), which had an impact on the further development of the Church's teaching and on Franciscan spirituality.

Heinrich Kaufringer in the 15th century

Hortus Deliciarum - the Holy Spirit as the inventor of the seven liberal arts (original around 1180, reproduction before 1871)

This ranking is derived from Isaiah 11.2 (-3)  EU . While only six gifts are mentioned in the original Hebrew text (see above), a seventh gift was added in the Greek translation of the Septuagint and the Latin translation of the Vulgate : in Hebrew the term "fear of God" appears again in the following Verse Isaiah 11,3  EU , while the two translations mentioned use two different words in these places, one for "piety" and one for "fear of God". This led to the number seven, which is symbolically related to the cardinal virtues and the divine virtues (faith, hope, love, wisdom, justice, bravery and temperance) and the seven deadly sins compiled by Pope Gregory the Great (pride, greed, lust , Envy, gluttony, anger, indolence), as well as the seven sacraments ( baptism , confirmation , Eucharist , penitential sacrament , marriage , ordination , anointing of the sick ).

There is also a relationship between the seven liberal arts (grammar, rhetoric, dialectics , arithmetic, geometry, music, astronomy) and the Holy Spirit as "inventor" (German: "inventor, founder, author"). B. in an illustration of the encyclopedia Hortus Deliciarum of the abbess Herrad von Landsberg (d. 1195) from around 1180 .

Evangelical tradition and point of view

Martin Luther formulated in his Small Catechism of 1529 as follows: “The Holy Spirit has called me through the Gospel and enlightened me with his gifts ”. Martin Luther transferred the Latin hymn of Rabanus Maurus into German for his Wittenberg hymnal of 1524 and held it at the predetermined "Siebenfaltigkeit" of spiritual gifts determine what the German Protestant hymnal of 1996 as a hymn met.

Based on Martin Luther, the theologians of Lutheran orthodoxy of the 17th century formulated a pneumatology in which the gifts of the Holy Spirit are often developed and considered. Johann Conrad Dannhauer (Strasbourg, 1649) and Johann Andreas Quenstedt (Wittenberg, 1685) describe the spiritual gifts as seven-stage functions of the Holy Spirit:

With this, a seven-part scheme, which is described as a differentiated spiritual path, returned to the Protestant Church through the thoughtful work of Lutheran High Orthodoxy - a hundred years after the Reformation. The gifts of the spirit are - in this system - understood as a dynamic, spiritual process.

In his doctrine of faith, Friedrich Schleiermacher does not differentiate between individual and specific gifts of the Holy Spirit, but assumes that the Holy Spirit as a whole dwells in a person:

"Every born again participates in the Holy Spirit, so that there is no communion with Christ without the indwelling of the Holy Spirit and vice versa."

In his dogmatics of the Christian faith, Gerhard Ebeling remains formally on Schleiermacher's line by deliberately avoiding the listing of various spiritual gifts and focusing on this teaching:

In his dogmatics, Wilfried Joest goes into detail about the gifts of the Holy Spirit and asks: “Have such extraordinary effects become so alien to our church life because it has become too bourgeois, too much adapted to the normality of the world, too little of Easter joy and hope is fulfilled? "

The spiritual renewal of the congregation in the Evangelical Church in Germany draws on the list of gifts of the New Testament and the statements according to which Christians should strive for the gifts of the Holy Spirit, in accordance with the "Sola Scriptura Principle" (only Scripture counts for Protestants) teaches about it in seminars and books.

"So also you: since you strive for the gifts of the Spirit, strive to build up the community and have everything in abundance."

In the charismatic movement , the following gifts are commonly counted among the gifts of the Holy Spirit:

Other gifts of the Spirit

The following gifts are also sometimes counted among the gifts of the Holy Spirit: