Detail from The Cardinal and Divine Virtues by Raphael , fresco in the rooms of Raphael

As a cardinal virtues (from the Latin cardo "hinge, pivotal point"; also primary virtue ) is known since the ancient times , a group of four basic virtues . Initially, these were not the same for all authors. A group of four is already in Greece in the 5th century BC. BC and was probably known earlier; the term "cardinal virtues" was first used in late antique patristics by the church father Ambrosius of Milan in the 4th century.

The group of four main virtues is first documented by the Greek poet Aeschylus , in his 467 BC. The piece Seven Against Thebes (verse 610). He seems to assume they are known; therefore it is assumed that it was used by the Greek nobility of the 6th century BC. Were common. Aeschylus characterizes the seer Amphiaraos as a virtuous man by calling him

The term agathós (“good”) is to be understood here, as in many inscriptions, in the sense of “brave” (andreios) .

Plato adopted the idea of ​​a group of four in his dialogues Politeia and Nomoi . He kept his bravery (ανδρεία with him andreia ), the justice (δικαιοσύνη, dikaiosyne ) and Prudence (σωφροσύνη, sophrosyne ) in, but replaced the piety (εὐσέβεια, Eusebeia ) through wisdom (φρόνησις, PHRONESIS ) or wisdom (σοφία, sophía ). This displaced piety from the catalog of virtues. Even Plato's contemporary Xenophon , who, like Plato, was a pupil of Socrates , attributed a canon of only two virtues to Socrates, namely piety (which determines the relationships between people and gods) and justice (which is decisive for the relationships between people).

In his conception of an ideal social order (πολιτεία, politeía), Plato assigns a virtue to each of the three parts of the soul he has assumed and to each of the three classes, namely the highest part of the soul or class wisdom, the second class courage and the lowest class understanding or ability of moderation . Justice is assigned to all three; it ensures that the parts of the whole work together correctly.

Not only the members of the academy founded by Plato , but also the Stoics adopted the canon of the four virtues; The group of four also found its way into the rhetorical handbooks from stoic literature . Hence the educated of the Hellenistic and Roman worlds were familiar with it.

The same four main virtues were taught in Judaism; they appear twice in the Septuagint (the Greek translation of the Tanach ), namely in the Book of Wisdom (8.7) and in the 4th Book of the Maccabees (1.18). The Jewish philosopher Philo of Alexandria also dealt with it; he allegorically interpreted the four rivers of paradise as the four virtues.

Marcus Tullius Cicero , who relied on a work by the Stoic Panaitios that has not survived , represented the doctrine of the four main virtues. He introduced her to the Roman world. In his De officiis (On Duties) he mentions and discusses the four virtues:

Ancient doctrines of virtue are reflected in the interpretation of the Bible with the reception of ancient philosophy by Christian theologians such as Ambrosius , Hieronymus , Augustine , Bede and Hrabanus Maurus . In the 4th century, Ambrose of Milan wrote a doctrine of duties (De officiis ministrorum), in which he deals with Cicero's view. He first used the term "cardinal virtues" ( virtutes cardinales ); but the expression "main virtues" ( virtutes principales ) is more common with him . He adopted Philon's interpretation of the four rivers of Paradise as the four virtues.

A first systematic formation receives the doctrine of virtue within the moral teaching of Thomas Aquinas , who called the cardinal virtues as Angel, in which all other virtues are fixed: "A virtue is called cardinal or principal virtue, because the other virtues are attached to it like the door in the hinge . "( Virtus aliqua dicitur cardinalis, quasi principalis, quia super eam aliae virtutes firmantur, sicut ostium in cardine. )

Immanuel Kant only allows one primary virtue to apply in relation to the secondary virtues: "It is not possible to think anywhere in the world, indeed even apart from the same, that which could be considered good without restriction other than a good will alone." all other virtues can "also become extremely evil and harmful".

In the tradition of Thomas Aquinas, the philosopher Josef Pieper identifies the following Christian cardinal virtues:

He gives prudence first. Out of it all other virtues are born. Wisdom is the measure of justice, bravery, and moderation. In the disoriented post-war period, he succinctly summed up this Christian belief:

“There is no sentence of the classical Christian doctrine of life that sounds so unfamiliar, even so strange and strange to the ear of today's man, even the Christian: that the virtue of prudence is the bearer and the formal basis of all other cardinal virtues Justice, bravery and moderation: that only those who are wise can also be just, brave and measured; and that the good person is good by virtue of his cleverness. "

or according to Mengzi accordingly

Allegorical representation of the cardinal virtues

Allegorical representations of the cardinal virtues are typical elements of representative tombs of the Renaissance and Baroque, especially on funerary monuments for popes, bishops or secular rulers such as the Doges of Venice .

Depiction of the virtues on the representative baroque facade (1737) of the Gesuati Church in Venice are intended to make the Dominicans , who commissioned the church and facade, famous.

The allegorical representations of the virtues are always feminine, according to the gender of the term in Latin. Attached inscriptions or attributes help the viewer to identify the respective virtues.

Prudentia with two faces and a mirror, detail from Raphael's Cardinal and Divine Virtues , fresco in the Raphael Rooms 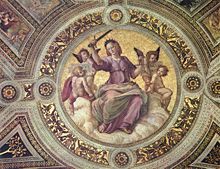 Justice (Justitia) with scales, sword and crown, medallion on the ceiling of the Stanza della Segnatura in the rooms of Raphael

The canon of the four virtues does not appear in the New Testament . The apostle Paul introduced three theological virtues (cf. 1 Cor 13:13  EU ):

The following illustration can be found in the Cappella degli Scrovegni in Padua.

Together this results in the number seven:

They are contrasted with the seven deadly sins (main vices) in the Catechism of the Catholic Church .