Brave is a redirect to this article. For the Austrian gynecologist, see Siegfried Tapfer . 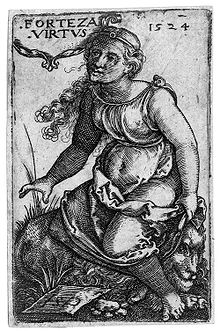 Bravery is the ability to persevere in a difficult, disadvantageous situation despite setbacks. It presupposes the ability to suffer and is usually associated with the conviction that we are fighting for overarching values. The brave is ready to face a conflict or face danger without any guarantee of his own integrity. Often - but not necessarily - he wants to bring about a happy outcome. In today's parlance, “courage and bravery” are sometimes used as a pair of terms to denote two different aspects of a complex character attitude.

The adjective brave arose from the Old High German taphar , which is documented from the 10th century and means “heavy”, “weighty”. The Indo-European root probably meant "thick", "firm", "squat". The Middle High German brave or dapfer was also given the transferred meanings "important", "significant", "respectable" and "capable" and later also "fearless", "bold", "courageous". The latter use prevailed in New High German . Since the 15th century, the noun bravery (early New High German also bravery ) has been documented, the original meaning of which was "heaviness", "strength", "importance", "meaning", "dignity". From this the modern use of the expression developed ("boldness", "courage", "fearless behavior").

The term "bravery", which has been known in the German language since the old and Middle High German heroic poetry, has its conceptual forerunners already in classical antiquity:

In the ancient Greek aristocratic warrior society, as described by the poet Homer in the Iliad , the term ἀνδρεία (andreía) (literally 'manhood') is used for a person who was characterized by male virtues, which were highly valued at the time. ἀνδρεία is literally 'masculinity', that is, the virtue by which a man proves that he is a respectable man (ἀνήρ).

This award was already thought of in heroic poetry as a complex of outstanding physical and character traits that made a successful warrior.

With the appearance of the first philosophers and a corresponding reflection on an ethical basis, the term expanded in terms of content, which also included the civil sphere and, in addition to war heroes such as Alcibiades, also included people such as the ancient philosopher Socrates , who fearlessly accepted the death sentence imposed on him : Whoever had the ἀνδρεία , was considered ἀνδρεῖος (manly, fearless, capable) and could be described as "ὁ ἀνδρεῖος" (the manly, capable).

The ἀνδρεία has been one of the basic virtues since Plato . For his student Aristotle , the νδρεία (andreía) is an ethically valuable property, a ἀρετή (aretḗ). His Mesotes -Teaching ἀνδρεία defined as a virtue the center, which is under the control of σωφροσύνη (= Prudence) stands. The scheme of the cardinal virtues fixed by Plato in his Politeia does not play a role in Aristotle.

The meaning of the ἀνδρεία, which Aristotle also includes courage and bravery, is the realization of the good: the brave is fearless according to the measure of man. He will now also fear the things that are humanly terrifying; but as it is duty and as reason wills, he will bear it for the sake of good.

According to Aristotle, the manly (ὁ ἀνδρεῖος) withstands the terrible in spite of fear, in that he does not allow himself to be confused by either too much or too little fear. But the most terrible thing is death.

The Greek term ἀνδρεία was inherited as virtus (male virtue) in Roman antiquity. With the generals like Caesar and war reporters like Tacitus , in view of the different behavior of the combatants in battle, the necessity of differentiating between audacia (daring, daring) and fortitudo (bravery) came into the language, which persisted into the Latin-speaking learned Middle Ages.

In the heroic epics of the courtly Middle Ages there are already translations of the Latin term and own word creations for the phenomenon of bravery: The poet of the Nibelungenlied describes the heroic resistance of the Burgundians in the hopeless final battle against a Hunnic superiority as manhood (= ' manhood ', 'bravery '). In addition, the adjective brave appears, which expresses the manly steadfastness of the warrior against the pain inflicted on him by his tormentors.

In modern language usage, in accordance with the Latin and German language tradition, the Old High German and Middle High German heroic poetry led to a greater differentiation of the conceptual field, in particular a clear distinction between the terms “courage” and “bravery”:

In this way, the religious philosopher Josef Pieper ties in with the ancient tradition and adopts bravery as a cardinal virtue in Christian ethics. He characterizes it as the ability to accept a wound. The most extreme and deepest wound is death. Hence in Christianity martyrdom, the “blood testimony”, is the real and highest act of bravery; without a willingness to be martyred there is no Christian valor.

The risk researcher Siegbert A. Warwitz also differentiates in the sense of the Latin and German term tradition: The term bravery (...) describes the ability to endure pain without being plaintive. If daring represents a power of initiative that enables one to take a risk in spite of threat and fear, then bravery expresses the power of tolerance that enables one to stand steadfastly through dangers. Courage is endowed with boldness and bravery with the ability to suffer . Courage (audacia) and bravery (fortitudo) are seen as clearly distinguishable terms in terms of content, which are not always linked in real life: There is the courage to tackle a dangerous task without the follow-up action of bravery, which is required when facing setbacks. There is also bravery, which - without the need for courage - requires strong tolerance, for example when a fatal illness or paraplegia is discovered. In the ideal requirement, courage is followed by bravery. Both are then used in linguistic usage as the pair of terms “courage and bravery”.