This article deals with the material gift, for the cadastral community in Lower Austria see alms (community Göpfritz an der Wild) .

An alms-giving (from ancient Greek ἐλεημοσηνη eleēmosýnē " compassion , charity, mercy"; hence also called "mild gift") is a material gift to a needy recipient without expectation of a material return from this recipient. It differs from a donation in the motivation of compassion for the recipient. Depending on the culture or religion, alms can be combined with the expectation of a spiritual advantage or the performance of a penance , so that in this case the relationship between the giver and the recipient is less in the foreground, but the relationship between the almsgiver and a higher power. 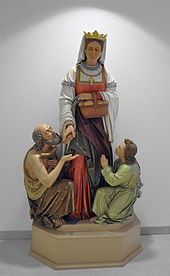 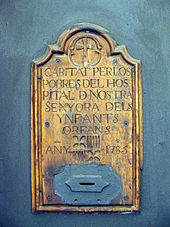 Alms offering box at the chapel of a Spanish orphanage. The inscription asks for charitable donations for the poor of the Hospital of Our Lady of the Orphans.

In many religions, giving alms is considered desirable or a duty of the faithful and is usually given in monetary form.

In Theravada Buddhism, monks only get their living from alms. The givers regard their giving as a favor bringing good luck.

In Judaism , the giving of alms, known as the tzedaka , is an expression of charity and an obligation in faith . The scope and amount should correspond to the social and economic circumstances of the donor.

The Christianity founded almsgiving New Testament . In the Gospel of Mark , Jesus instructs the rich young man about what belongs to his immediate followers beyond keeping the Jewish Torah : One thing is still missing: Go, sell what you have, give the money to the poor, and you will become a treasure in the Have heaven; then come and follow me! 10.21 EU . In early Christianity, in addition to the support of the apostles, there were also collections for the needy in the congregation in Jerusalem. Caring for the needy, going well beyond the ordinary, was a fundamental trait of the earliest churches. A large part of the material goods of the early Christian communities were intended to provide for the poor (e.g. widows and orphans). The deacon Laurentius suffered the martyrdom because he did not want to give the money of the community intended for the poor to the Roman emperor Valerian. As a result of the change to the imperial church in the 4th century, the church faced new challenges in this area.

The consequence of this basic attitude that the material gift is only part of the Christian love of neighbor , are demands of the church father John Chrysostom in the 4th century not to simply buy the slaves free and leave them to themselves, but to finance them to learn a trade first. so that they can live freedom in dignity and provide for their families. This mutual connection and responsibility is what distinguishes Christian love service from pure almsgiving. In the Roman Catholic Church , giving alms, like prayer and pilgrimage, is one of the possibilities to obtain an indulgence under certain conditions .

During the Reformation , with the participation of Philipp Melanchthon and the Wittenberg pastor Johannes Bugenhagen, church ordinances such as B. 1523 the Leisniger caste order . Funds from the parish, which came from the "box", a kind of money chest, were used to support the needy through alms.

In Islam , almsgiving ( Zakat ) is one of the five pillars of godly life, that is, a duty. In addition, in the past some Sufis (Islamic mystics ) lived exclusively on alms. Sufism sees almsgiving as a form of victory over selfishness and avarice. It shows the visualization of the togetherness of all creatures. It is compared to "fasting the soul " and fasting the body.