Penitents at the Way of the Cross in Iztapalapa , Mexico

In the religious sense, repentance is a reorientation of man.

The words that are used in different languages ​​for the term “penance” (from Middle High German büezen in the sense of “improve, make good, eliminate, treat, erase”) have very different meanings in the respective everyday language, which can easily lead to misunderstandings .

In Christianity, repentance represents the endeavor to restore a relationship between God and man that has been disturbed by human offenses. Repentance leads through the knowledge of one's own guilt ( Job 42.6  EU ) to the righteous works of new life ( Acts 26.20  EU ), which include turning away from the previous way of life ( Rom. 6,1f  EU ). Jesus Christ is seen here as the atonement for original sin and the sins of all people.

In the Catholic Church

In the Catholic Church , the term repentance can mean:

In the Evangelical Church

In the Protestant Church , repentance is understood primarily as a change in one's inner attitude and emphasizes that repentance is brought about by God. Man does not repent of his own accord, but God is the cause of repentance. External actions are associated with this reversal, but not as a prerequisite, but as a natural consequence of a fundamental change in the inner attitude. The word repentance can be applied to special days or acts of repentance, or to a constant way of life. This is expressed in the first of Luther's 95 theses :

"Since our Lord and Master Jesus Christ says: 'Repent' etc. ( Mt 4,17  LUT ), he willed that the whole life of believers should be repented."

In the orthodox churches

In the Orthodox Churches , metanoia ( see: Metanie ) is primarily understood to be a change in attitude to life that comes about through the voluntary cooperation of the Holy Spirit on the one hand and the individual on the other. The aim is to accept God's forgiveness, to leave the anger against God and fellow human beings behind, and thus to move from an unnatural, inhuman "death attitude" to a natural, human attitude to life. The world spoiled in the Fall, however, pulls man again and again in the wrong direction, contrary to his actual nature as the image and likeness of God, so that the metanoia is a lifelong effort against one's own spiritless following. The reception of the sacraments , fasting and prayer help by presenting a counter-image to the fallen world in the "here and now".

The pietism and some evangelicals understand by penance also a unique, fundamental conversion to Jesus Christ, which results in a changed life. This conscious change in life is the answer to the offer of God's grace, ends the previous life as an unbeliever and, with the help of the Holy Spirit, begins a life oriented towards God.

The month of Elul is considered to be the beginning of the "Teschuwa", the repentance. This is not yet concluded with Rosh Hashanah , but extends over the following ten days of repentance up to Yom Kippur . This is the holiest and most solemn day of the Jewish year. His prayers and scriptures speak of repentance and reconciliation - with oneself, with fellow men and with God. Eating, drinking, bathing, personal hygiene, wearing leather (including leather shoes) and sexual relations are forbidden on this day, and in modern times also smoking. The fasting  - the total absence of food and drink - begins just before sunset and ends on the following day, after nightfall.

In Islam, God is the only one who accepts man's repentance, provided that it is genuine repentance with a firm intention to refrain from sins in the future.

“The heavens almost incline to break from above, and the angels glorify their Lord with His praises and implore forgiveness for those on earth. See, surely Allah is the Forgiving, the Merciful. "

There is no fixed practice of penance. The devout Muslim must trust in the mercy of Allah and repent for his sins through religious acts (praying, fasting, etc.). 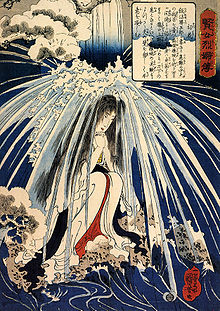 Hatsuhana repents with crossed hands under the roaring Tonosawa waterfall for healing her son's knee until she dies from the hardship and austerity ; Ukiyo-e by Utagawa Kuniyoshi

In Buddhism , the term repentance or repentance is seen as a reorientation similar to that in Greek (μετάνοια metanoia) and the Chinese term ( 懺悔  /  忏悔 , chànhuǐ ) used in Buddhist texts is also translated as “penance” or “repentance”. The process of repentance begins with the recognition of the unwholesome character of action, speech or thought or the unwholesome intention behind it. In the awareness that all activity forms karma and has corresponding consequences, the harmful character of unwholesome thoughts, words and actions (on 'self' and 'other') is recognized and thus regretted. The 'active repentance' or penance is the decision to turn back, to not harm , to purify or purify the spirit and to prepare the ground for healing actions. Complete repentance and repentance eliminates the karmatic consequences (which may also have to be endured) and opens the way to complete liberation even for those who are guilty of extremely unwholesome acts. A classic example is the robber and murderer Angulimala ( MN 86, Angulimāla Sutta), who eventually becomes an arhat , a saint. See the Buddhist confession of repentance .