The term covenant gives the two biblical key terms ברית( Hebrew בְּרִית Brīt , also Brith or Bərit ) and διαθήκη ( Greek diathēkē ) and has the meaning of a solemn alliance, contract or oath. A covenant can be a contract between people or a covenant between God and people.

In a covenant between God and human beings, partners are God on the one hand and humanity, a people or individual persons on the other. It is characteristic of the covenants with God that they are made between unequal partners. Accordingly, the covenant is “instituted”, “given”, “established”, “commanded”, “granted” or “offered” by God. Nevertheless it contains an obligation on the side of man or the people and also an obligation on the side of God. Therefore, a covenant, like a contract, must not be broken. The covenant between God and the assembled nation of Israel on Sinai is a covenant ( berit ) with a whole people, a communal revelation.

The Hebrew noun ברית berīt , usually translated as covenant , is etymologically probably derived from Akkadian bīritū, band, fetter . Other translation possibilities would be alliance, agreement, commitment . A berit (covenant) is closed by an act of division, hence the Hebrew phrase: "cut a covenant" (karat berit) ( Gen 15.18  EU ). Presumably this goes back to an ancient rite that affirmed legal treaties between nations in Abraham's time. The cutting of a ribbon for the inauguration of a bridge or a street, which is still used today, probably goes back to this custom.

Confederation as a contract between people

The Tanach describes various alliances between individual people or peoples. On the one hand, this can be an agreement between equal contracting parties, such as between Solomon and Hiram of Tire ( 1 Kings 5.26  EU ). On the other hand, unequal partners can also agree on an agreement. In the covenant described in Jos 9: 1–27  EU , for example, the Gibeonites become “slaves” or “servants” of the Israelites. And the last king of the southern kingdom of Judah , Zedekiah , is installed by the great power Babylon as ruler over the dependent small state of Judah ( 2 Kings 24.17 f.  EU ).

An important element of the contractual arrangements is the oath with a deity by which the contract is sworn. This makes the covenant binding, even if it turns out to be disadvantageous. The covenant between the Israelites and the Gibeonites, sworn at YHWH , is binding, although it came about under the pretense of false facts ( Jos 9:19 f.  EU ). Even when Zedekiah broke the agreement concluded with Babylon and sought an alliance with Egypt, this breach of the covenant was not seen as a purely secular matter. Since the covenant with Babylon was sworn by YHWH, the consequences of breaking the covenant are viewed as divine punishment ( Ez 17.11-21  EU ).

Covenant between God and man

God's covenant with the Israelites is fundamental to the Torah and, consequently, to the entire Tanakh . However, the idea of ​​a covenant relationship between God and humans is not limited to this. There are various federal agreements with different ranges. 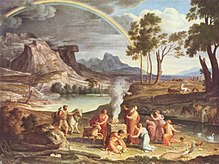 God's covenant with Noah : Joseph Anton Koch , approx. 1803.
With a rainbow as a covenant symbol

The covenant of God with Noah ( Noah's covenant ) is mentioned twice in the flood story ( Gen 6,18  EU ; 9,8-17 EU ). It extends to Noah, his family and descendants, and all living beings saved on the ark . In connection with this covenant, God imposes the seven Noachidic commandments on humanity . God himself pledges never again to exterminate all living things with a flood. The federal agreement begins with the assurance: As long as the earth exists, sowing and harvesting, cold and heat, summer and winter, day and night should not stop ( Gen 8.22  EU ). The symbol for this covenant is the rainbow .

In the priestly tradition, the covenant is the theological explanation from which the Flood is interpreted. YHWH pronounces an "unconditional yes" to humans, but also to animals. It's about a solemn promise that comes unilaterally from YHWH and is relevant to everything that lives.

The covenant is exposed for the first time in connection with the promise and election of the ancestral fathers (Abraham's covenant or fathers' covenant).

God made a covenant with Abraham and his descendants. The circumcision of all males was used as a sign of the covenant ( Gen 17  EU ). In tradition, it becomes the most important covenant, as it is the foundation for the special election of the people of Israel. According to the Bible, Israel's importance for the salvation of other peoples is based on this.

The idea of amphictyonia , which has meanwhile been pushed back, belongs in its context , as do the local federal deities (also: Baale ), especially of Shechem (cf. Ri 8.33  EU ; 9.4.46 EU ). In Exodus this covenant finds its (re-) acceptance, confirmation and renewal as God's covenant with Israel and is connected with the gift of the Torah :

In history, federal agreements and treaties have also been attested between unequal partners and peoples. Such pre-ancient contracts often had a three-part structure with a preamble , a prologue with a historical overview of the good performance of the stronger party and the section with contractual conditions and contractual promises, see for example the Hittite vassal contracts from the middle of the 2nd millennium BC. Chr.

The contract (covenant) between God and the people or the nation of Israel can be viewed as resembling this pattern. It contains a preamble, continues with the mention of the good deeds of God and ends with the terms of the contract and God's promise, blessings and curse, with public proclamation before the people and recognition of the contract by the nation. The content of God's contract with Israel also has parallels in literature. The Codex Ḫammurapi and the Egyptian law and statutes contain equivalents relating to the protection of persons, the protection of property and general legal provisions relating to social issues.

What distinguishes the Sinai covenant, the contract between God and the people or the nation of Israel from the historical contracts, is the ethics , which appears as divine revelation through the prophet Moshe , as the highest expression of divine will. About 1300 years BC Above all, an ethic is given by God and accepted by Judaism , which became the model of the Christian and Muslim religions and the basis of modern western civilization and general secular human rights . For Judaism, the presence and word of the living God mean special covenant commandments , the grace and love of God. The cause of the covenant between the king of kings and the nation of Israel was not due to Israel's qualities or merits. Israel was chosen to serve according to the unfathomable will of God, observing his ordinances, commandments and prohibitions. Only seven Noachidic commandments are imposed on the other peoples . Jewish tradition teaches that each of its generations has to understand itself anew as if they were standing on Mount Sinai, which is also called Horeb, and hear the thunder, the ram's horn and the voice of God that speaks:

“I am the Eternal , your God, who brought you out of the land of Egypt, out of the house of slaves. You shall not have any other gods in front of me. "

“You should not make an idol for yourself, not even a form similar to what is above in heaven and below on earth or in the water under the earth. You should not bow down to them or worship them in worship. Because I, the Eternal, your God, am a jealous God (..) "

Covenant in the Old Testament

In Christian Bible theology , the “old” and “new covenants” are often used in comparison. The term old covenant is used as a collective term - sometimes used disparagingly - for the covenants of God with humans described in the Jewish Tanach or the Christian Old Testament , especially for the special "offered" alliance ( berit ) of God with his "chosen" people Israel . The “new covenant” ( diathēkē ) is understood to refer to Jesus Christ as the founder of the new salvation covenant; his covenant sign is Jesus' last supper with his disciples .

Covenant in the New Testament

The term covenant found its way into the Christian New Testament (NT) via the Greek Old Testament . In the NT, diathēkē is mostly used to mean covenant , not the usual meaning of testament .

In the New Testament, according to Christian understanding, the Sinai covenant ( Exodus 24), which God had made with Israel in the Old Testament (OT), was renewed. Depending on the theological understanding, this covenant is also referred to as the new covenant or second covenant because of its establishment on Maundy Thursday if the covenant with the people of Israel is viewed as the first or old covenant. In this context, the terms of (covenant) fidelity (cf. Dtn 7,9  EU and others) and God's righteousness like the Ten Commandments should also be discussed. According to Christian theology, Jesus Christ made this New Testament covenant with his disciples ( Lk 22 : 19-20  EU ):

“And he took bread, gave thanks, broke the bread and handed it to them with the words: This is my body which is given for you. Do this in memory of me! Likewise, after the meal he took the cup and said: This cup is the new covenant in my blood, which is shed for you. "

The signs of this covenant are bread and wine . The celebration of the Eucharist or the Lord's Supper is a reminder of this covenant. The individual is accepted into the new covenant through baptism ( Rom 6,3-5  EU : Letter of the Apostle Paul to the Romans, approx. 56 AD):

The Covenant Thought in Christian Theology

In the Greek Old Testament (the Septuagint), the original Christian literature in Greek, the original Hebrew term is Berit with the Greek word diatheke translated what outside the Bible the meaning Testament (cf. this. Testament (Bible) ). In Christian theology this choice of words makes sense because it underlines the special covenant idea of ​​the Bible. Like a will, a covenant of God is a declaration of will by an individual (namely, God) and not an agreement between two parties that is recorded in a covenant or contract. In the Jewish tradition it is seen exactly the opposite, here the term contract seems more appropriate. In the Christian literature of the Greek Old Testament, the word diathēkē often has the meaning of disposition, manifestation of will or arrangement .

Frets that u. a. are concluded with Noah, Abraham and Moses, represent religious-historical schisms , in the sequence of which the religion of the OT changes and develops to the final stage. In retrospect, the only and eternal God is assumed to have had multiple changes of heart, which came from the reformers.

In spite of all the codification, the federal relationship is not a symmetrical one, in which equal partners can be assumed, so that "federal" and "election" are used synonymously here and there. As a rule, however, a distinction is made between the outside, on which the election makes the people of Israel the “chosen people” in an exposed position, and the inside, which contains the obligation to God (according to Hermisson, the “covenant” in the narrower sense).