The Book of Judges (abbreviation: Ri ; Hebrew ספר שופטים Sefer Schoftim ) is part of the Tanach and therefore also part of the Old Testament . It has been divided into 21 chapters since the Middle Ages .

It describes the time after the conquest ( Book of Joshua ) until shortly before the beginning of the king's time under Saul (approx. 1050 BC).

At that time Israel was a judiciary, i. that is, it was ruled by judges. The best known are the judge Debora and the judges Gideon , Simson and Samuel , under whom the judge's time ended and the king's time began.

The Hebrew wordשֹׁפְטִיםUnlike in German, ("judge") includes not only a legal, but also a politico-military component, tribal leader (cf. Phoenician-Punic sufet ). The politico-military component predominates in the judges' book. The judge Debora conquers the metropolis of the north with Hazor (in contrast to this representation, Joshua already does this ), while some of the so-called little judges ( Tola , Shamgar , Jaïr , Ibzan , Elon and Abdon ) had a predominantly legal task. However, the book does not report on legal tasks in the strict sense of the word, i.e. on jurisdiction. The designation of the people as "Judges of Israel" is also misleading, since they actually only presided over one city ​​or one of the Twelve Tribes of Israel . The different chapters of the book of judges deal with different parts of the settlement area of ​​the tribes.

The emphasis on the salvation of Israel only through their God is a strong reference to a Deuteronomist as the editor of the book. In the fragmentary manuscript 4Q559 , the judges of Israel are also described; apparently as part of a continuous chronology and without a deuteronomistic framework.

Outline of the Book of Judges

Settlement areas of the Twelve Tribes of Israel

The book begins with the continuation of the historical narrative about the conquest of Israel, which follows directly from the narrative in the book of Joshua. The tribes of Judah , Simeon and Benjamin conquer the areas west of the Dead Sea, including the cities of Jerusalem and Hebron . However, some of the peoples in the conquered areas cannot be entirely destroyed. The territory of Gaza remains occupied by the Philistines ( Judges 1,1-21  EU ).

The settlement areas of the Manasseh , Efraim , Zebulun , Ascher and Naftali tribes are also conquered. However, even here it is not possible to drive out all the inhabitants of the conquered areas. In some cases, however, the Israelites are strong enough to force the residents to do slave labor ( Judges 1,22-36  EU ).

Chapter 2 begins with a threat from the angel of God, since the Israelites did not, as required by YHWH , drive out or kill the inhabitants of the land and tear down the altars of the foreign gods: “Therefore I tell you now: I will [the foreign peoples ] not drive out before your eyes, but they should resist you, and their gods should bring you down. "( Ri 2,3  EU )

The following section about Joshua's death belongs chronologically at the beginning of the book, before the conquest of the individual tribes. Joshua the son of Nun died at the age of one hundred and ten; he was buried in Timnat-Heres on the territory of his tribe of Ephraim. After the whole generation of Joshua who had crossed the Jordan with him died, Israel no longer remembered the deeds of YHWH and served other gods ( Judges 2,6-10  EU ).

In Ri 2,11-3,6  EU then follows an explanatory summary of the following sections of the individual judges. Because of the wrongdoing of the people they will have to suffer great hardship, then God will send a judge to redeem the people. For the rest of his life there will be peace, after which the people will fall back into evil behavior. They did it “worse than their fathers” and “did not give up their evil doings and their stubborn behavior.” ( Judg 2,19  EU ) The following is a short list of the peoples who continued to live among the Israelites after the conquest. 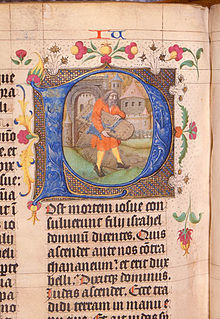 The stories of the fourteen most important judges follow. The narratives, where they are detailed enough, adhere pretty closely to the scheme shown above: apostasy - misery - calling a judge - salvation - peace - apostasy. In the founding myth of Old Testament Israel, war was always portrayed as something commanded by God, and victory fell to those who built on it. Extensive ' excesses of violence ' against enemies and among each other are described.

The final part of the book contains some historical accounts that have nothing to do with the judges. The Danites move to Laish (later called Dan ), beat the inhabitants with a sharp sword and destroy the city. On the way they had taken the Ephraimite Micah's image of God and his priest with them and put the image up next to them. It is said to have stood there until it was abducted into Babylonian captivity ( Judges 17.1-18.31  EU ).

Chapter 19 contains a narrative that is strongly reminiscent of the events in Gen 19.4-11  EU . A Levite's concubine is brutally raped and murdered while he was sleeping in Gibeah, in the settlement area of ​​Benjamin. As a warning he divides it into twelve parts and sends it to all the tribes of Israel ( Judges 19 : 1-30  EU ). The Israelites then gather at Mizpah to take action against Gibeah of the crime. However, instead of surrendering the evildoers as requested, Benjamin creates a strong force. The first two attacks on the city are repulsed and the Israelites suffer heavy losses. On the third day, the Israelites managed to attack the city of Gibeah by means of an ambush. They set the city on fire and almost completely destroyed the army that had left. 25,000 from the tribe of Benjamin fall on this day ( Ri 20  EU ).

Immediately after the end of the battle, the Israelites repented that practically the entire tribe of Benjamin was now exterminated. However, they cannot give women from their own ranks to the remainder because they swore they would not. Now, however, they find that Jabesh-Gilead had not sent anyone to the congregation, so was not bound by this obligation. It was sworn to destroy anyone who stayed away from the congregation. So the Israelites went out, destroyed Jabesh-Gilead, and killed all the inhabitants except the virgins they could find. These were given to the Benjaminites. But because there were too few women, the Benjaminites robbed the women of Shiloh during a festival ( Ri 21  EU ).

The last sentence of the book summarizes the events again, as it were as a parable, and points to the coming events in the books of the prophet Samuel : “In those days there was no king in Israel; everyone did what he liked ”(21.25 EU ). Under Samuel then follows the proclamation of the kingship under Saul, as well as a description of the rise of Israel to a great power .

The Book of Judges is rarely referred to in the New Testament . The mostly indirect references concentrate on the people perceived as heroes of faith. John the Baptist is represented in Luke 1.15  EU as a Samson-like Nazarite (without the name Samson being mentioned there). Mt 2.23  EU makes a similar reference on the occasion of the birth of Jesus. Like Jaël , the woman who killed Sisera , in the Deboralied ( Ri 5,24  EU ) Mary is described in Lk 1,42  EU as "more blessed than all other women".

A direct mention of persons in the Book of Judges can be found in Heb 11:32  EU , where Gideon, Barak, Simson and Jiftach are named as heroes of faith alongside Enoch , Noah , Abraham , Isaac , Jacob , Mose , Rahab , David , Samuel and the prophets. The characterization of the persons in the Letter to the Hebrews, which differs greatly from the Old Testament model, is explained by the homiletic objective of Chapter 11 of the Letter to the Hebrews. This chapter is not an exegesis of Old Testament texts, but a sermon on faith .