A Nazarite (from Hebrew נָזִיר Nasir, which can be translated as “ascetic”) is a person in Judaism who voluntarily takes a special oath to God . Originally, the Nasiräat probably existed permanently. In the post-exilic period , both men and women could commit themselves to a temporary Nazarite vow.

Components of the ( ascetic ) oath are:

These provisions can be found in Num 6,1-21  EU . The Nazarite's hair and beard are shaved off before the appointed time begins.

In ancient Judaism , at the end of this period, the Nazarite offered an animal sacrifice in the Jerusalem temple and the hair and beard were cut off again. If the Nazarite came near a corpse, for example if a person suddenly died in his presence, the previous time was invalid and the counting of the days began again.

Usually the oath was taken for a time, according to Jewish tradition it was between thirty and a hundred days. But there were also Nazarites for life who had already been chosen by their parents for this path of life. The best known of the latter were the judge Samson , the prophet Samuel, and John the Baptist .

It is known of the Christian apostle Paul that he took this oath at least once for a time, and that other Jewish Christians in the early Jerusalem community also took this oath. 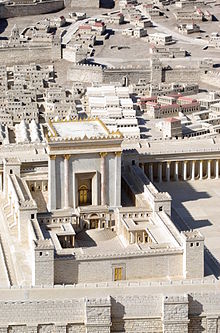 Herodian temple , the place of the Nazarites was in one of the women's courtyards

In today's Judaism, after the destruction of the temple made it impossible to take the oath with the prescribed sacrifice, this practice is less common. A prominent example of a modern Nazarist is the Lithuanian-Israeli rabbi David Cohen (1887–1972), named in honor of Rav haNasir .

In addition, there are now some Rastafarians who have also taken the vow of a Nazarite, which results in the characteristic dreadlocks (hair; "felt curls") and long beards. Rastafari is a movement that is widespread around the world today, arose out of Christianity and therefore has many Old Testament references.

The views on the meaning of the oath (beyond religious obedience) differ in research; some see it as a kind of therapy for alcoholism and depression , others a kind of second, voluntary priesthood , still others a kind of magic that was associated with superhuman powers.