The title of this article is ambiguous. Further meanings are listed under vinegar (disambiguation) . 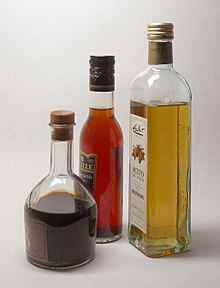 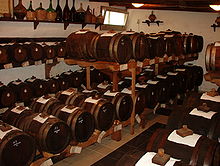 Vinegar (from Middle High German ezzich ; Latin Acetum ) is a sour- tasting seasoning and preservative that is produced by fermenting liquids containing alcohol with acetic acid bacteria ( mother vinegar ). Vinegar is essentially a dilute solution of acetic acid in water.

Vinegar processing is one of the oldest food production processes known to man. In Germany, vinegar may contain between 5% and a maximum of 15.5% acetic acid according to the regulation on the trade in vinegar and vinegar essence of 1972 ; Vinegar essence maximum 25%. Commercial vinegar usually has an acetic acid concentration of 5% to 6%. Acetic acid or vinegar essence diluted with water is also often referred to as vinegar, but must be declared as such. Vinegar contains only small amounts of alcohol . Glacial acetic acid is a highly concentrated acid (99 to 100%), which accordingly contains very little or no water.

Many ancient civilizations -  Egyptians , Persians , Romans , Greeks and Babylonians  - were already producing vinegar. Vinegar, made from sour fruit juices, wine or beer, mixed with water, was valued as a cooling drink. There are traditions from Mesopotamia that speak of “sour beer”. This product, called "Hequa" by the Egyptians, was brewed from barley and soured from the vinegar. Roman legionaries had a mixture of water and vinegar in their canteens, which they called " Posca ", often the drinking water was not drinkable until then. 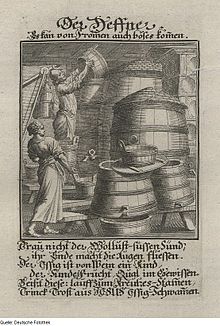 The medicinal use of vinegar for respiratory diseases and digestive problems has already been handed down by Hippocrates . L. J. M. Columella , the most important agricultural writer of the first century AD, reports in great detail in his work " De re rustica " about the possibilities of making vinegar. Its starting materials were wine , figs and barley .

Historic bottle for four robbery vinegar or plague vinegar, was considered a protective agent against contagious diseases and is still used for smoking hospital rooms.

In the Middle Ages , herb vinegar in particular was considered a remedy. Hildegard von Bingen , Nostradamus and Florenz von Venningen report in their writings on the mode of action and use of the medicinal plants extracted in acetum sanum . At that time the human body was subjected to various rubs with vinegar, primarily for disinfection . Even in the 18th century, attempts were made to deal with the plague with plague vinegar . Containers and devices used in medicine were cleaned with vinegar. From the 16th century the first taxes were levied on products with or made from vinegar. Pickling vegetables in vinegar and making marinades for salads were particularly popular in France at the time .

In beauty care , vinegar was used because of its cleansing and disinfecting properties up to the treatment of stubborn skin diseases . The violet blossom vinegar of Empress Sisi is still famous today . Today vinegar is mainly used as a preservative , seasoning and luxury food.

One differentiates between vinegars, on the one hand, according to the type of production and, on the other hand, according to the raw materials used. With regard to production, a basic distinction is made between two different types of production. On the one hand, vinegar can be produced by fermentation using vinegar bacteria, and on the other hand by diluting vinegar essence. Vinegar essence is characterized by an acid content of 25% and is produced on the basis of acetic acid (acid vinegar), which is either obtained naturally by processing wood waste (wood vinegar), especially beech wood, or synthetically. Industrial vinegars are synthetically produced vinegars. 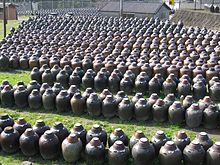 After production, spices, herbs or fruits can be added to vinegar to influence its taste. Sage, tarragon, garlic, blackberries or raspberries are often used. Mixtures are also common. Brandy vinegar, wine and fruit vinegars are suitable as basic vinegars for these so-called batch vinegars or flavored vinegars. Herbal and spice vinegars belong to the batch vinegars, as do vinegars with an aromatic mixture of different types of fruit and vegetables.

Vat in the Viennese vinegar brewery

Liquids containing alcohol, for example wine, apple cider , beer , rice wine , or malt brew, or liquids containing sugar such as grape juice, for example for the Aceto balsamico di Modena, can serve as the basis for making vinegar . However, vinegar is mainly made from diluted pure distilled alcohol ( agricultural alcohol ) or from processing wine in the form of the so-called "white vinegar". Vinegar made from distilled alcohol is called brandy vinegar.

For the production of malt vinegar, a grain mash, preferably from malted barley , is first crushed and mixed with hot water. The enzymatic processes involved in this mashing process convert amylose into malt sugar, maltose and grape sugar ( glucose ). This also creates other types of sugar . The sugar-rich liquid is separated and collected via a perforated base. This malt extract is cooled in unhopped form and mixed with yeast ( Saccharomyces cerevisiae ), which ferments the sugar to alcohol and carbon dioxide. The resulting liquid forms the substrate for alcoholisation. The ratio of fermentable sugars and non-fermentable sugars is decisive for the quality of the malt vinegar. The non-fermentable sugars form the flavor components typical of malt vinegar.

The process is often referred to as acetic acid "fermentation" , but it is correctly called fermentation. It is a partial "breathing", since oxygen from the air is required, in contrast to alcoholic fermentation . Therefore, vinegar cannot be produced in closed, unventilated containers. There are several methods of manufacture.

The Orléans process is the name given to the open production method in which the starting liquid is inoculated with vinegar bacteria . The fermentation process is left to itself in open vessels. Production is carried out in warm rooms for an accelerated reaction. After a while, the alcohol-consuming bacteria, the so-called mother of vinegar, form a layer of scum on the surface of the liquid . In this way, the alcoholic raw material is slowly transformed into the oxidation product vinegar. Once the alcohol is completely converted into acetic acid, the vinegar is carefully drained under the skin. Some of the vinegar is then stored in barrels, which further improves its aroma through aging processes. This process is more time-consuming than the rapid vinegar process, harbors the risk of “bad fermentation” and is not suitable for large quantities.

This original process was probably discovered by accident, as wine that is left open can sooner or later turn into vinegar on its own. The cause was only discovered in the 19th century when Louis Pasteur provided evidence that small creatures that cannot be seen with the naked eye undergo this transformation process. In his work Études sur le vinaigre , published in 1868, he wrote that “acetic acid fermentation” is a biological process that is carried out by certain bacteria, called Acetobacter or Gluconobacter. These “wild” vinegar bacteria, which are present everywhere, can usually be found themselves when stored open, and the vinegar fly can also be the carrier of the bacteria.

Sebastian Karl Schüzenbach should be mentioned among the people who tried to improve the production of vinegar - above all to accelerate it. He introduced the rapid vinegar process: since vinegar bacteria work aerobically , they are helped by a floating carrier material, usually wood chips, but also plastic balls on which the bacteria settle and adhere. Since the mother of vinegar is "tied up" on the carrier material, the process is also called a bondage process. The chips increase the surface area on which the vinegar bacteria can settle, and the larger amount of bacteria accelerates the conversion.

With the round pumping or circulation process , the chips are constantly sprinkled with the starting liquid (mash) in a cylindrical container ( vinegar generator or large-capacity generator ), the so-called chip former. The fresh air required by the bacteria is blown in from below. This process is suitable for large-scale production; the fermentation can be completed within a few days to weeks. The disadvantage is the high cost, as the temperature and ventilation have to be constantly regulated. If there is too much air entering, the aroma can be washed out.

A new bondage process replaces the chips with ceramic shards. This makes production cheaper, as the ceramic can be used for practically unlimited purposes.

On the far right, a fully automated fermenter from Heinrich Frings .

Submerged processes like that by Otto Hromatka work without a carrier material, the bacteria are directly suspended in the liquid (so to speak submerged, hence the name of the process). Depending on the technology, production takes two to three days in the Venturi process or 24 hours in turbine systems. Turbine systems bring the best results in industrial alcohol vinegar production, venturi processes preserve the color and the fruit character better. The short production time is very economical, which is why most vinegar producers worldwide are switching to the turbine process. The air supply is controlled, as the excessive air entrainment in early systems led to aroma washouts. In the submerged process, the purity of the vinegar cultures used leads to very pure vinegars, which cannot be achieved in the bondage process through mixing with other bacteria.

The Solera system , also known as the Solera method, is a classic approach. The original essence of wine vinegar, which was produced using the Orléans process, for example, is further refined by adding a certain percentage of fresh grape must from the new harvest to the already aged young vinegar in so-called criaderas (rows of barrels lying one above the other) . This process usually works in such a way that only the amount freshly added to the top row of kegs is added that was previously removed for the next row below. This system continues into the bottom row of kegs, with fresh liquid only being added to the top row for inoculation. The partially aged essence is placed in the barrels below. The finished product is always in the barrels in the bottom row. Of course, in the course of the enlargement or renewal of such barrel storage facilities, it is not always possible to keep the process according to the classic system, which is why the essences are pumped around more often or the barrel rows of the first vintages are placed opposite those of the following years. 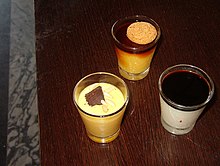 The areas of application of vinegar are very diverse. Among other things, it is used as

Simple types of vinegar and commercial vinegar concentrates up to 30% are not only suitable for preparing food, but also for decalcifying saucepans and electric pressure cookers. The effect is accelerated by heating it up to boiling. If more concentrated vinegars such as vinegar essence are used, increased caution is required.