Pot is a redirect to this article. Further meanings are listed under Topf (disambiguation) . 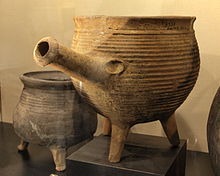 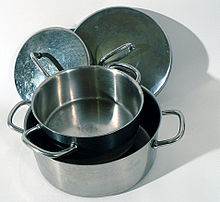 A cooking pot or short pot , colloquially port , Kochhafen or Low German Pott (in Switzerland, particularly in the case of stem pot and pan called) is a vessel for cooking food. The saucepan is an essential part of the cookware , i.e. all the vessels that are used to prepare warm dishes, with cooking appliances ( stoves or cookers) generating the heat. Pots are among the oldest civilization goods. They have been used since the Neolithic .

In order to be able to touch the saucepan better, it is provided with one or two handles or handles that used to consist of soldered or riveted metal parts. Today, the handles are often made of plastics or other poorly heat-conducting materials , which, however, limits their use in the oven. A special form of the cooking pot is the saucepan, the saucepan . This saucepan has no handles, but a stem.

In the early cultures, antiquity and the Middle Ages, cooking pots were mostly made of ceramic because metal pots were unaffordable for the common people. This tradition has been preserved in the modern Roman pot . In the past, pots were also made of soapstone , which is why this stone was also called pot stone. Pots today consist of metals such as steel , with chromium and nickel-alloyed stainless steel , cast iron , aluminum rare brass or copper (tin-plated, because copper is not acid-resistant and can toxic reaction products result), since it from the open flame or hot plate produced Conduct heat well, transfer it to the food and dissipate excess heat: In the 20th century, heat-resistant glass was added as a new material, known as Jena glass .

With the advent of electric stoves , pans with faced bottoms were required to ensure good heat transfer from the hotplate. A modern way is heated above induction on the induction cooker . This requires pots with ferromagnetic bases.

Many pots are now provided with surface coatings that prevent food from burning and should make cleaning easier. Often it is enamel and Teflon .

In addition, saucepans almost always have a lid that is also provided with a handle , which closes the saucepan by its own weight and thus allows a slight overpressure during cooking , which can have a positive effect on the preparation of some dishes. The lid can also be made of metal, but also of other materials such as glass . A saucepan closed with a lid requires significantly less energy than an open saucepan to maintain the same temperature. Without a lid, part of the energy supplied is constantly lost in the form of hot gas (water vapor). With the lid on, the evaporation takes place more slowly. Even less energy is required when cooking with a pressure cooker , which cooks with overpressure and increased temperature.

In the past, sand or salt was often used to clean pots and pans . In the meantime, dishwashing brushes are used together with detergents containing surfactants , and in the case of stubborn soiling, pads made of steel wool or pot sponges with a fleece made of matted plastic fibers, which can also be coated with abrasives.

For energy-efficient cooking, the hob surface must match the bottom of the pot. Energy is lost to the side of hot plates with too small a pot base. No energy is lost with induction hobs. A much larger pot base, on the other hand, reduces the energy efficiency on all hobs by greatly extending the warm-up time.

For good heat transfer, the bottom of the pot must touch a heating plate over the entire surface at operating temperature. In general, the metal expands with increasing temperature. Due to the different temperatures of the bottom of the pot and the wall of the pot, the bottom of the pot is deformed when heated. Good cookware is built so that the bottom is flat when it is hot. When cold, however, good cookware is often slightly curved inwards and only becomes level when heated. If it is heated too much, the bottom bends outwards. As a result, the heat output transferred by the hot plates and glass ceramic hobs and the efficiency drops. The pots get poorly warm and the cooking time and electricity costs increase. In addition, this can damage the pot, the hob and the temperature controller, as well as burned food on thin floors. Gas and induction stoves work with bent pot bottoms without any problems.

The pot material also has a major influence on the amount of energy used in cooking. The optimal choice depends on the preparation time and temperature as well as the dish.

In the case of glass ceramic hobs (brand name Ceran ), the color of the outside of the base is also important. Since the energy is transferred there via thermal radiation, the bottom of the pot must be able to absorb it well. The best energy transfer can be achieved here with dark pot bottoms.

Linguistic feature: In German-speaking Switzerland, the term pot hardly used, which in High German pot is, is there as a pan called while the pan in Switzerland frying pan is. In North German there is the synonym Pott , in South German Hafen and the corresponding job title Hafner instead of Töpfer or Pöttker, and in Low German also Duppen and similar forms.

A popular game among children is knocking the pot . This is about finding a pot with your eyes blindfolded.

The symbolic addition of pot and (matching) lid in pairs has also led to the emergence of expressions related to interpersonal relationships such as every pot finds the right lid , the pot has found its lid and similar things.