Some brand names developed into a designation that is still common today for the pressure cooker, especially Kelomat in Austria and Duromatic in Switzerland. 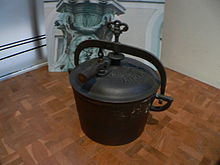 Papin pot for household use (in the Ottoneum , Kassel)

In 1679 Denis Papin invented the Papin pot , with which the boiling temperature of water could be influenced by generating different pressures. This was also used in scientific laboratories.

A modern pressure cooker came on the market in 1927 under the brand name Sicomatic ( Siko for short for "safety cooking pot") from the Riedling company Silit . The Flexsil brand pressure cooker from Sigg in Frauenfeld became popular in Switzerland . Its pressure relief valve worked with a weight stone, not a spring. The flexible (and pretensioned curved) lid was clamped into the inwardly protruding edge of the pan without a rubber seal, whereby the lid handle served as a lever and was not closed with a bayonet lock as is common today. On May 18, 1946, Max Keller from Zurich submitted a patent application to the Swiss Institute for Intellectual Property for “insert bodies for pressure vessels, especially for pressure cookers, with a signal device and a pressure relief valve”. 1949 arrived in Switzerland Duromatic from Kuhn Rikon to the market. The Kelomat was developed in Austria in the 1950s .

The pressure cooker is a thick-walled saucepan, the opening of which has an outwardly curved edge with bayonet-like recesses for the pressure-resistant mounting of the lid. The lid has a rubber ring seal and usually both a control valve and a safety valve to limit the pressure . Modern pressure cookers have valves firmly integrated into the lid, whereas older ones were screwed in. The control valve usually has a pressure-dependent rising pin with ring markings to indicate the pressure. Nowadays the valve is coupled with the lid lock so that the pot can only be opened without pressure to avoid accidents.

There are perforated and unperforated inserts for the pressure pots for cooking dishes, which do not come into contact with the still liquid cooking water, but are cooked in the steam.

With the pressure cooker, the actual cooking vessel is usually closed airtight and watertight by means of a locking mechanism ( bayonet lock ) with the lid and a seal. The resulting water vapor pressure makes it possible to reach a higher temperature than normal for cooking and thereby shorten the cooking times. Usually there is about 1.8 bar absolute pressure during operation in the pot  , i. H. 0.8 bar overpressure ; This is not very much, but it increases the boiling temperature of the cooking water to around 117 ° C. The RGT rule states as a rule of thumb that the reaction speed increases 2 to 3 times with a temperature increase of 10 degrees (overall cooking is an interplay of different chemical reactions). The pressure cooker can be used to cook “lowland dishes” even at high altitudes where water cannot be heated to 100 ° C under normal conditions.

A pressure cooker is a pressure vessel that has to undergo a type test before it can be placed on the market, as it falls within the scope of Directive 2014/68 / EU on pressure equipment . As an additional security against the existing risk of the pot bursting (e.g. if the control valve is stuck), a pressure cooker always has a safety valve that can safely reduce any overpressure.

In principle, a pressure display is not absolutely necessary, but since the necessary pressure control enables a display with the simplest of means, it is built in. Usually this is a stick that protrudes more or less from the lid depending on the pressure. In this way, the minimum heat supply required to maintain pressure is easy to set.

Photo 2: Pressure cooker, view from above

Photo 2: Lid from the outside

Image 3: Lid from the inside

In order to be able to open (turn) the cover, the catch must first be drawn in with the slide on the cover handle (the cover unlocks). At the same time, the safety valve, now in its function as a pressure relief valve, is forcibly opened.

In addition to the food to be cooked (roast, jacket potatoes, fruit for juicing, etc.), a certain minimum amount of water is added to the pot and the lid is sealed gas-tight. When heated, some of the water evaporates and the pressure in the pot increases.

Before opening a pressure pot, the pressure must first be released: either via the valve (quick venting) or by cooling. The quick ventilation is only suitable for solid food: liquid food would splash, potatoes would burst with quick ventilation.

The correct function of the valves, which can be impaired, for example, by contamination, must be ensured. If the pressure is too high, steam can escape from the seal or the sudden evaporation of the water when opening under pressure can lead to scalding. In the worst case, the boiler can only burst (“ boiler crack ”) if there is insufficient maintenance . Such a pressure cooker can cause serious injuries or scalds, even with a relatively low overpressure.

The pressure display usually has two levels. The second (higher) level is the normal one, with which the preparation times are reduced by around 50-70% (with the higher pressure and temperature values ​​mentioned above). The first level is suitable for sensitive food, where the cooking process takes a little longer, but still less than in a normal saucepan. Cauliflower florets on 'normal' (3–3.5 minutes) can hardly be obtained à point ; At level one it is easier to reach the right cooking time.