This article is about cooking food using heated water. For the craft in general see culinary arts . For more terms, see Cooking (disambiguation) . 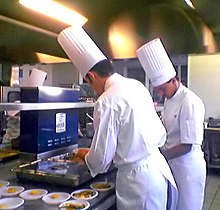 Cooks while cooking in a modern industrial kitchen

Cooking ( borrowed from Latin coquere , "boil, simmer, mature") is, in the narrower sense, the heating of a liquid up to and at the boiling point , in the following the cooking or preparation of food in general, regardless of the type of preparation, e.g. B. Baking (cooking dough or in a batter), roasting or grilling (dry heating). The professional title of cook is derived from this .

Due to the different boiling points of various substances, for example of liquid nitrogen at 77.36 K (−195.79 ° C ) in molecular cuisine or of cooking fat when deep-frying at 140 to 190 ° C, cooking can take place over a wide range of temperatures .

Depending on the context, the terms “cooking” and “ simmering ” are used synonymously .

"Cooking game lesson" in the kindergarten (Frankfurt / M. Around 1900)

Cooking is one of the oldest and most important human cultural techniques . The earliest traces of food preparation with tools are 1.5 million years old: antelope bones scraped off with stone blades found in Kenya and marrow bones opened between stones . The decisive step was taken with the mastery of fire by Homo erectus (see Prehistoric use of fire ). The earliest known traces, estimated to be around 1.5 million years old, were found in what is now Ethiopia. In Asia, hearths of Homo erectus with charred bones were found in the cave of Zhoukoudian near Beijing (age approx. 700,000 years) and in Europe remains of huts with hearths ( Terra Amata near Nice , age approx. 400,000 years).

The early cooking techniques before the invention of pottery and metallurgy can for the most part only be reconstructed indirectly, from descriptions of traditional processes in historical times and from observations of Stone Age societies that still exist today or until recently. The most original methods are certainly grilling , cooking in hot ashes and roasting on stones heated in the fire, which is suitable for meat, roots and cereals. For cooking in the narrower sense, i.e. heating in liquid, earth pits and natural vessels such as mussel shells, ostrich eggs, turtle shells, etc. or tightly woven baskets, the contents of which were cooked by inserting hot cooking stones , were used. Earth ovens are still in use today, in which food is wrapped in leaves, covered with hot stones, and grass and earth are isolated, slowly simmering . In East Timor , food is still cooked over an open fire in thick bamboo poles. In early China, food was wrapped in clay or clay and braised in a fire.

Another method was to cook meat (also with grain or vegetables) in animal skins, stomachs or intestines over the fire. Herodotus describes it as follows: “In the Scythian land , this is the procedure for cooking. The meat of the skinned animal is loosened from the bones and thrown into the cauldron, if one is present. If there is no kettle, all the meat is put into the animal's stomach, water is poured in and cooked with the help of the bones. The bones burn very well, and the stomach comfortably receives the meat loosened from the bones. So this is how the beef cooks itself, or whatever other animal it is. ”How old such processes are cannot be determined, as they leave no traces, but they probably represent the original form of the sausage that is used in dishes how Haggis or Palatinate Saumagen put down.

The importance of cooking lies primarily in the chemical reactions that take place: the cell tissue is loosened, proteins coagulate, connective tissue gels, fats liquefy, starch gelatinizes, minerals are released and flavors are formed. In addition to the easier digestion of meat and fruit , which until then made up the main part of the diet, cooking above all resulted in an enormous expansion of the food supply: Until then, animals and plants that were difficult to digest, inedible or even poisonous could be made edible through cooking, including starchy ones Grasses and roots, some of the descendants of which eventually became staples . Cooking also has a sterilizing and preserving effect , which has a direct impact on health and improves the options for storage. In the wake of the invention of cooking, the human anatomy changed, especially the dentition : They were greatly reduced in size, which was also beneficial for the development of the speech apparatus and thus language .