The title of this article is ambiguous. Further meanings are listed under sausage (disambiguation) . 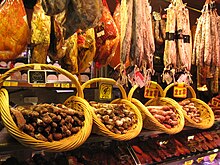 Different types of sausage in the market hall in Roses

Sausage is a food that is prepared from minced muscle meat , bacon , salt and spices , with certain types also using blood and offal . The prepared mass, the sausage meat , is filled into intestines , bladders or stomachs , divided into individual sausages by binding with sausage twine or stapling with rustproof metal clamps and, depending on the type, cooked by boiling or baking or preserved by drying with or without additional smoking . Synthetic casings , glasses and tins are also used in sausage production .

For the production of sausage, meat (especially pork , beef and veal , as well as lamb , poultry ( poultry sausage ), horse and game ) and bacon is minced with the meat grinder and mixed with the spices. For fine sausages, the mixture is also processed into a homogeneous dough with the cutter , with the addition of ice .

According to the manufacturing process, types of sausage are divided into three groups: 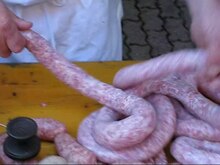 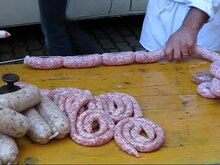 Raw sausage consists of raw meat, bacon and spices and is either eaten fresh or preserved by drying or smoking . Before smoking, there is a maturing process in which the sausage turns red and develops its consistency and aroma. Lactic acid bacteria , and sometimes noble mold , also play a role in ripening . Raw sausages are divided into spreadable and sliceable raw sausages. Typical spreadable raw sausages are the unripened or only briefly ripened sausage and tea . Typical cut-resistant raw sausages are the longer matured, hard permanent sausages such as Ahle Wurst , Chorizo , Landjäger , Salami , Walliser dry sausage and Zervelatwurst .

Individual specialties are also enriched with other ingredients such as certain types of salami with nuts (including the French Saucisson aux noisettes), Palatine Saumagen with potatoes, and more recently cheese crackers with cheese as well as a variety of cold cuts with vegetables or mushrooms , mostly mushrooms . In Mediterranean countries, garlic is also used instead of onions. Other ingredients can be regional specialties, in Italy pistachios and grappa , in France sweet chestnuts or in the Black Forest kirsch . French andouille and andouillette are made exclusively from offal.

Sausages and sausages come in many lengths, weights and sizes. One of the largest sausages is, for example, the Italian mortadella with a weight of up to 100 kg and a diameter of up to 300 mm. The smallest sausages include a. Cocktail sausages , they weigh only about 30 grams, or Nuremberg Rostbratwurst , which is only 7 to 9 centimeters long.

The terrine , a dough-free variant of the pate, is related to the sausage .

Technically, chemically or microbially caused, quality-reducing properties of sausages and sausage products that are not necessarily related to spoilage are called sausage defects. Which includes:

Destruction of the emulsion by excessive cutting

Common sausage defects in raw sausages are gray or dry edges, gray core, cracking, unclear cut and mold . Boiled sausages can also be gray in color, burst or have unsmoked saddle spots (kinks near the ends of the sausage). Cooked sausages still have a bloody core, a sour taste, fat deposits and insufficient binding.

The sausage meat of cheap sausage is partly stretched with mechanically separated meat (not detectable), skimmed milk yoghurt or gelatinous mass of cooked bones, collagen hydrolyzate (hydrolyzed protein) and gives the sausage slices a softer consistency. On the one hand, this means that more added water can be hidden in the product, on the other hand, such processes increase the mass that can be consumed by the slain animal.

Meat imitations that are deceptively similar in appearance and taste are produced by the food industry from the substitutes soy, egg white and quorn and sold as “vegetarian sausage” or “vegetarian cold cuts”. Egg white as the main component with 70% is problematic from the vegetarians' point of view, because many chickens lose their lives to produce it.

The sausage was and is still today the product of the desire for the greatest possible utilization of a (slaughtered) animal. Meat can be preserved for longer by processing it into sausage. The first sausages, even if not in the current sense, were probably made in earlier times, see Haggis . The first Chinese mention of a sausage can be found around the year 589 BC. In this, lamb and goat meat were used.

Homer mentions a type of black pudding in his Odyssey . These blood-filled animal intestines were taken into battle by the Greek warriors in order to receive divine support. This story may be one of the legends. The ancient Greeks and Romans were already familiar with the production of sausage, for example the Lucanicae , which is also an example of a Latin food term that has even entered the Greek language. From ancient times, sausage production spread across Europe. The storage of sausage produced special furniture, e.g. B. the sausage crown .

Rohrman et al. published an analysis of EPIC data in March 2013 that examined the relationship between the consumption of processed meat, among other things, and the risk of early death. The researchers evaluated the data from a total of 448,568 men and women who at the start of the study had not yet had cancer and had not had a stroke or heart attack . All participants knew how they ate, how much they moved, whether they smoked and what their body mass index was. At the start of the study, all participants were between 35 and 69 years old. They came from ten European countries and were followed for an average of 12.7 years. 26,344 participants died during this period. The analysis showed that the consumption of processed meat correlated statistically significantly with higher mortality: Those participants who ate more than 160 grams of processed meat per day had a 44 percent higher risk of dying during the time of the study than participants who did only consumed around 20 grams per day. The scientists explained this analysis result with the fact that processed meat often has a much higher fat content than unprocessed meat and is treated with table salt and other substances that are potentially harmful to health.

A number of idioms are related to the making or appearance of sausages. “Laws are like sausages, it is better not to be there when they are made”, or “The less people know how sausages and laws are made, the better they sleep!” Is attributed to Otto von Bismarck . The bon mot goes back to the American poet John Godfrey Saxe (1816–1887) and has been associated with Bismarck since the 1930s.

The phrase "I am sausage" or "I am sausage" in the sense of "I am indifferent" comes from the student language ; its meaning is unclear. It could be a shortening of is me sausage like skin and an analogy to jacket like pants . Hans-Martin Gauger does not consider a vulgar association with shit to be ruled out, Wolfgang Seidel sees the sausage with regard to the everyday sausage bread associated with it as the “epitome of everyday triviality”.

Other popular expressions are “It's about the sausage” (= “Now the final decision is made”) and “Everything has an end, only the sausage has two”. " Sliding sausage" jokingly means the method of eating little sausage with a lot of bread in times of poverty and need. A joke circulating about butchers is: When making sausages, the master says to the apprentice: "If what comes in here comes out, we come in and not out again".

Hanswurst is a mockery and an insult, a coarse comic figure in German-language impromptu comedy since the 16th century.