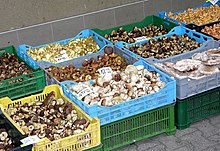 Edible mushroom is the generic term in kitchen language for the fruiting bodies of various types of mushrooms that are edible and tasty. Most edible mushroom species belong in the mycological system to the stand mushrooms . There are several hundred types of edible mushrooms in Central Europe, but only a few dozen are generally known and more commonly consumed.

In Austria and dialect in Bavaria they will mushroom in the Erzgebirge sponges , in Saxony sponging called in Switzerland are used in addition to fungal and Schwümm .

Edible mushrooms are called the mushrooms that are edible for humans. They hardly contain any fat or carbohydrates and are therefore low in calories. They are of particular interest for human nutrition because of their protein, vitamin and mineral content.

In contrast to plants, the supporting cell structure of the mushrooms consists of chitin , which may contribute to their sometimes more difficult digestibility.

Not all mushrooms, but all edible mushrooms, are edible after sufficient cooking. Some species, such as the pearl mushroom, are poisonous in their raw form; some contain substances that, in combination with alcohol, can cause discomfort, e.g. B. the wrinkle ink .

Edible mushrooms should be processed fresh as their protein decomposes quickly and can become indigestible or even toxic. Therefore, the consumption of rotten or insufficiently heated mushrooms can lead to mushroom poisoning . Such "spurious mushroom poisoning" is much more common than true mushroom poisoning caused by toadstool . However, the widespread use of refrigerators significantly slows the breakdown of protein . In the case of wild mushrooms, however, it should be noted that their ingredients have often not yet been adequately researched and it is therefore not certain whether inedible ingredients are produced during storage and heating. 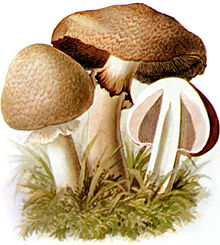 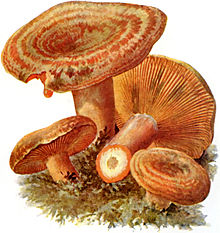 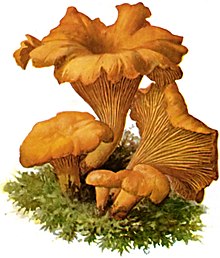 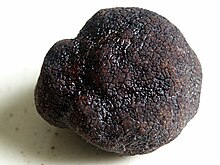 All edible mushrooms can be frozen after thorough cleaning and blanching . The traditional method of preservation is drying, for which fresh, maggot-free specimens are cut into fine leaves and then pulled on a string for a few days or spread out on paper on a radiator if necessary. When completely dried out, they can be kept for years in the absence of air. Not all types of mushrooms are recommended for drying; Porcini mushrooms and chestnut boletus are particularly suitable, as they develop a more intense aroma.

Since most types of fungi live as symbionts or parasites in close communities with certain plants, only a few species can be successfully grown and then play a role in the food industry. These include Zuchtchampignon , oyster mushroom , oyster mushroom , shiitake , nameko and Judas ear ( "jelly ear" or "Chinamorchel") and, more recently, the reddish brown stropharia rugosoannulata ( Stropharia rugosoannulata ), also known as "Chinese almond mushroom" in the supermarket shelves . A cultivated form of the velvet foot carrot from China can be found as a preserve , there called “gold needle mushroom” (Jīn Zhēn Gū) and one of the most widely cultivated types of mushroom worldwide.

A cultivated mushroom with economic importance in Southeast Asia is the rice straw mushroom (Thai: "Het Fang", เห็ด ฟาง), a cultivated form of the black- striped volvacea ( Volvariella volvacea ), which also occurs in Europe . It is grown on a rice straw substrate by covering the mushroom cultures with shady palm fronds, creating a microclimate that promotes growth . The kind is now also offered in Central Europe as a preserve in the Asian food trade. There are also widespread "cultivated mushrooms" on the markets that are collected in nature, but actively cultivated there by termite peoples in a symbiosis, called "termite-growing or termite mushrooms" (species of the genus Termitomyces , for example Termitomyces albiceps , T. fuliginosus , T. striatus , Thai: "Het Kon", เห็ดโคน or "Hed Kha Kai", เห็ด ขาไก่).

In summer and autumn, edible mushrooms, mostly collected in the forests of Eastern and Southeastern Europe, come onto the market in large quantities, especially chanterelles , boletus and chestnut boletus , occasionally bread stubble and giant bovista . The very rare and extremely sought-after truffles from France and Italy play a special role .

Green compacts were also sold until a few years ago , but they may have turned out to be latently poisonous. There were still unexplained deaths in France, so the mushroom should no longer be eaten.

Edible mushrooms can be collected all year round, but the most productive season is the “mushroom season” from around August to the end of October, when the most famous species develop their fruiting bodies. Sufficient warmth and moderate humidity are beneficial for their growth. With persistent dry heat or cool wetness, only minor finds are to be expected.

There is no general criterion for differentiating between edible mushrooms and poison mushrooms . Precise knowledge of the appearance of their fruiting bodies is therefore essential. Unknown or not certain mushrooms should not be consumed.

It should also be taken into account that some mushrooms (for example green , fog-gray funnel and Kahler Krempling ), which were considered edible mushrooms a few decades ago, have now turned out to be poisonous. Current knowledge and books should be used when determining.

Mushrooms should always be collected and stored in airy, spacious containers such as baskets, as they are usually pressure-sensitive and spoil quickly when wet. A handy, sharp knife is required for harvesting and cleaning, if possible a folding or pocket knife. Finally, a handy, practice-oriented mushroom identification book should be carried with you, which mainly shows edible mushrooms and the inedible or poisonous species that can be confused with them. In order to be able to note down worthwhile locations for the next year, paper and ballpoint pen or GPS positioning are useful. A mushroom brush or a paintbrush allow cleaning. According to a recent study, contrary to popular belief, mushrooms can be rinsed off without fear of a loss of flavor.

Only young or largely intact, middle-aged mushrooms are worth collecting. Older specimens are often infested with maggots, have a worse taste and disintegrate very quickly. Fruit bodies that are too young should also be left because they pose a high risk of confusion. It is advisable to clean the mushrooms immediately, i.e. to remove the stem base, bad spots, snails, leaves, soil and needles and, if necessary, cap skin and lamellae or tubes. Later on, cleaning is much more time-consuming, as the impurities are distributed in the collecting basket.

If a mushroom cannot be clearly identified straight away, it should be unscrewed because the stem attachment can provide important information about the species. If that is not enough either, the mushroom should be thrown away or, if necessary, taken uncleaned in a separate container for later identification.

It is said again and again that one should cut off mushrooms with a sharp knife, otherwise the "roots" - the mycelium , the actual fungus - could be damaged. However, if you carefully turn the mushroom out of the ground, this is basically not to be feared. In addition, some types of mushrooms are difficult to identify without the base of the stem (for example, death cap mushrooms ).

In a more than thirty-year study on various test areas, the Swiss Research Institute for Forests, Snow and Landscape (WSL) came to the conclusion in 2005 that neither the method (cutting or turning) nor the extent of mushroom picking had any effect on the number and biodiversity of the mushrooms. In contrast, it was found that nitrogen input , i.e. fertilization, has a negative effect on fungal growth (see also poor meadows ).

After collecting, beginners should ask a local mushroom expert to assess the collected material. A current list of authorized experts for Germany can be found on the homepage of the German Society for Mycology .

Fungi are usually divided into three groups (which do not agree with the mycological system ):

The most famous representative of the boletus belongs to the first group . The spongy, usually easily detachable tubular fabric on the underside of the hat, which contains the spores , is characteristic of those relatives of thick tubers . In this group there are very few inedible or poisonous, but not fatally poisonous species; Beginners should therefore only collect tubers at first.

In the second group there are many more species, including excellent edible mushrooms, many inedible and poisonous. The best-known representative is the mushroom , the deadly poisonous (especially white) cap mushrooms are notorious .

The third group cannot be described exactly, it includes such diverse species as chanterelles , stubberies , cluck , morels and truffles . This group includes a relatively large number of mushrooms that are only edible or completely inedible and some poisonous, of which only the spring lilac can be fatal.

For a more precise determination, the color, shape and structure of the hat, the handle and the lamellas or the tubes must be compared using a current manual. The presence and properties of the ring or sheath are also an important characteristic of agaric mushrooms. Further characteristics can be the smell and / or the taste, whereby taste tests may only be carried out on mushrooms that are definitely non-toxic (exception: pigeons and milklings ). In the case of many types of fungus, the flesh of the fruiting body changes color in a characteristic way due to injuries ( maggot damage , pressure marks or cutting), which can be very useful for differentiation. Likewise, the color of the fluid that emerges after injuries in some species.

The color of the spores - another distinguishing feature - can be determined by placing an underdeveloped hat on a sheet of paper, covering it with a glass or something similar, and waiting a few hours. The lamellar structure and spore color are then clearly visible on the paper. A close examination of the spores requires a microscope with a magnification of about 1000 times. However, such spore examinations are usually not necessary for normal mushroom collectors, but rather are of interest from a fungal study point of view.

Mushrooms collected outdoors can be contaminated with pollutants. Especially mushrooms from exposed locations (roadsides and green spaces in the inner city area) should not be consumed, the heavy metal content can be very high here. On the other hand, cultivated mushrooms are unproblematic because they are grown under the most sterile, sealed-off conditions possible without the use of agricultural toxins.

Although the Chernobyl accident occurred in 1986 , some fungi are still radioactively contaminated with cesium -137 above average . The measured values ​​have already declined, but they vary greatly from region to region. Therefore, chestnut boletus , frost snail , ripe mushrooms (also known as gypsies ) and trumpet chanterelles should not be consumed in large quantities, as these edible mushrooms in particular can accumulate cesium to a particularly high degree. Furthermore, there is an increased base load from the above-ground nuclear tests of the 1950s and 1960s. However, this cannot explain the sometimes enormous fluctuations in exposure even within a species. Further factors for the degree of pollution are the type of forest and soil , soil parameters such as pH value and moisture, and the prevailing weather conditions. In the case of mycorrhizal fungi and parasites , the physiological properties of the symbiont or the host plant also play a role.

Some types of mushrooms that grow along roads with heavy traffic or in fields fertilized with sewage sludge accumulate in particular with harmful heavy metals ( lead , cadmium ) and thus contribute to an increased health burden when consumed. These types include well-known edible mushrooms such as the white anischampignon , the Parasol and the spruce stone mushroom . Species that do not accumulate heavy metals are meadow mushrooms , witch bonsai , morels and all wood-dwelling fungi. The lead content is higher in saprophytic species than in mycorrhizal fungi.

Within or on the edge of intensively cultivated crops (e.g. maize, fruit, hops, wine) there is an increased risk that pesticides and herbicides will be absorbed by fungi and thus get into the human body.

Edible mushroom of the year

The edible mushroom of the year has been proclaimed as part of the European Mushroom Day since 2016 . In 2019 it is the chanterelle ( Cantharellus cibarius ).