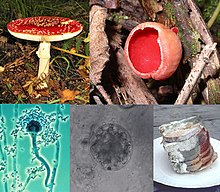 Representative of the mushrooms

Mycology (from ancient Greek μύκης mýkēs , 'mushroom' and logic ) is the science of mushrooms . Among the fungi, the departments are sac fungi (Ascomycota), Stand mushrooms (Basidiomycota), zygomycota (zygomycota) chytridiomycota (Chytridiomycota) and glomeromycota (Glomeromycota).

Traditionally, mycologists also deal with slime molds (Myxomycota) and egg molds (Oomycota), which are no longer counted among the fungi, but among the protists . The science of lichens  - lichenology  - also belongs to mycology in the broadest sense, since the dominant role in this symbiosis is taken by fungi. In mycology, there is great overlap with microbiology , since a great many fungi - at least in certain development stages - are also microorganisms.

According to a Greek legend, the Greek hero Perseus founded the city of Mycenae on the spot where he refreshed himself with water that had collected in the hat of a mushroom ( mýkēs ).

The term mycology originated in the 18th century and was coined by Christian Hendrik Persoon , whereupon it spread as a term for fungal science.

The real founder of mycology has been the Hungarian doctor David Gruby since 1841, when he discovered the skin fungus Trichophyton schoenleinii , the yeast fungus Candida albicans , the tubular fungus Ctenomyces metagraphytes and other fungi . In the course of the 19th century, the modern field of mycology developed from the parasitology that had emerged since the introduction of the microscope in the 17th century .

People already collected mushrooms in prehistoric times as food, for healing purposes and as an intoxicant. The oldest written mentions about mushrooms come from Euripides (480–406 BC). The Greek philosopher Theophrastus of Eresos (371–288 BC) was the first to try to use comparative morphology to create a kind of scientific differentiation between plants, including fungi. For him, mushrooms were plants that lacked important organs. Around 150 BC The Greek doctor and poet Nikandros described the difference between edible and poisonous mushrooms from Colophon (around 200–150 BC). Pliny the Elder (23 / 24-79) took in his encyclopedia Naturalis Historia anatomically embossed division before by the fungi categories fungus ( hat mushroom ), agaricum ( Lärchenporling ) suillus ( porcini ), tuber ( truffles ) and boletus ( Kaiserling ). A contemporary, the Greek doctor Pedanios Dioskurides (approx. 30–80), instead differentiated the mushrooms according to where they were found: hat mushrooms above ground, truffles below ground, porlings on the trees.

During the Middle Ages research into mushrooms was more or less idle; Instead of new knowledge, ancient knowledge was passed on , which also led to falsifications. Monks used the mushrooms primarily as food. The mushroom studies of the German abbess Hildegard von Bingen (1098–1179), which were unique in terms of quantity and quality for the Middle Ages, are considered outstanding . There were also scholars who generally advised against eating mushrooms, such as B. Albertus Magnus (1193-1280). According to his view, taken from ancient writings, mushrooms arise from evaporation and rot. In addition, they are not even real plants, since they do not have seeds, branches or leaves.

The division of mushrooms into edible and poisonous was still common up to the Renaissance, as can be seen from the systematics of Charles de l'Écluse (Clusius, 1526–1609). But with the 16th century the medieval stagnation in mushroom science began to give way to scientific progress. Adam Lonitzer (1528–1586) also says about mushrooms: “If there are neither herbs nor roots, neither flowers nor seeds, but nothing else then superfluous moisture from the soil, the trees, the wood and lazy things, so that they are also a short time , then they grow in three days, and they also perish, but especially when the weather changes. ”His contemporary Pietro Andrea Mattioli (1501–1577) tried a systematic classification of mushrooms into species . Giambattista della Porta (1539–1615) calls the spore dust of the mushrooms a kind of "seed".

In the 17th century, Joseph Pitton de Tournefort (1656–1708) recognized that fungi are independent organisms that can produce plant diseases. His system of mushrooms later became the basis for the system of, for example, Johann Jacob Dillen (Dillenius, 1684–1747) and Carl von Linné (Linnaeus, 1707–1778). At that time, the assumption was still very widespread that mushrooms were formed through a kind of "putrefactive fermentation".

Linné places the mushrooms together with ferns, mosses and algae in the class of "Cryptogamia" and enforces the system of binary scientific names for this class as well . Among the pioneers of mycology is the pastor and natural scientist Jacob Christian Schäffer (1718–1790), who corresponds to Linné, and author of a four-volume work on Bavarian and Palatinate mushrooms.

Other researchers from this time with their research focus:

The work of de Bary Morphology and Physiology of Fungi, Lichen and Myxomycetes (1866) could be described as the first textbook of mycology.

The following scientists may represent the many important fungal researchers of the 20th century, not a few of whom have traditionally come from botany , but are now "thoroughbred" mycologists:

With the increase in scientific possibilities - genetic, microbiological, molecular biological and other methods - it was recognized at the end of the 20th century that the realm of mushrooms was still largely unexplored. Phylogenetic research in particular brings about major changes in the systematics of fungi. So the class of the belly mushrooms (Gastromycetes) became superfluous, because their representatives were now assigned to other, sometimes different classes due to their development history.

Science is beginning to recognize the importance of arbuscular mycorrhizal fungi (Glomeromycota) for the thriving of many plants. It is precisely these fungi that appear to play a significant ecological and economic role in the future, and research has only just begun.

So far, only about 80,000 of an estimated 1.5 million mushroom species are known. The mushroom system and research into the ingredients and metabolic products of the mushrooms are still in their infancy.

Since only a small part (about 5%) of all suspected fungus species has been described, the systematics of fungi is one of the greatest challenges for the mycologists' guild. As in other areas of biology , more and more methods from molecular biology are used in the systematics of fungi , for example the polymerase chain reaction or DNA sequence analysis .

One focus of mycology is the role of fungi as pathogens in plants, because this is in the foreground from an economic point of view. Monocultures of cultivated plants in particular can be seriously damaged by phytopathogenic fungi such as smut and rust fungi . Here, mycologists examine the mechanisms of infection and research ways of combating it. This is followed by the development of measures against fungi, which can damage and destroy the food produced after harvest .

From the human point of view, fungi play a positive role with the ability to create various forms of mycorrhiza that can promote the flourishing of plants and crops. The arbuscular mycorrhizal fungi, which have only recently been investigated in more detail, are of considerable importance . There are also numerous other types of mycorrhizae whose importance for ecology or economy has not yet been fully explored.

Besides bacteria, fungi are the typical destructors in the ecological cycle . Without mushrooms, a mountain of otherwise hardly degradable lignin from wood residues would severely limit the possibilities of life on land.

The physiological peculiarities of mushrooms have not yet been adequately researched. Thus, for example, is in science still before the mystery of how at macrofungi the gravity perception and stimulus response functions. Experiments in microgravity , such as those carried out with the velvet foot , have so far not brought any clarity.

The medical mycology (including clinical mycology ) is a part of the medical microbiology as fungal pathogens in humans under the category microorganisms fall. It deals with interactions between fungi and humans. Research into diagnostic procedures and disease prevention as well as the therapy of fungal infections (mycoses) and poisoning with fungal poisons and mycotoxins play an important role .

Fungi cause diseases such as aspergillosis , candidiasis , athlete's foot and mold - allergy .

Fungi act as pathogens or producers of toxins. On the other hand, fungi are also suppliers of antibiotics against bacterial diseases in animals. There is also research into using fungi to transform low-quality organic substances - for example straw - into higher-quality feed sources.

In the wild, the chytrid fungus is now becoming a threat to the frog world there, especially in South America and Australia.

Technical mycology is economically important. As with technical microbiology, the metabolism of fungi (macro and micro mycetes) is examined. Genetic and other breeding methods are also developed and applied in order to be able to generate and extract metabolic substances. Examples are the large-scale production of antibiotics (for example through Penicillium species), vitamin C and citric acid (through Aspergillus species), vitamins of the B group through yeast . In addition, other medicines and foods are produced by mushrooms.

Another aspect in technical mycology is the ability of some fungi to break down toxic or environmentally harmful substances.