This article is about the Greek poet. For the asteroid see (2930) Euripides .

After Aeschylus and Sophocles, Euripides is the youngest of the three great Greek tragedy poets . Of around 90 tragedies, 18 have survived. In addition, one of his satyr games has come down to us. With his plays, especially Medea , Iphigenie in Aulis , Elektra and Die Bacchen , Euripides is one of the most played dramatists in world literature.

Little is known about the life of Euripides. Some information can be found in a preface to Byzantine Euripides manuscripts. Accordingly, he was the son of Mnisarchos and the Kleito from the inland demos Phlya of the Attic Phyle Kekropis . During the second Persian War , his parents fled in 480 BC. To Salamis , and so he was born here. He is said to have returned to Salamis again and again to compose his dramas in a secluded cave. The cave of Euripides was identified in 1997 in the south of the island. He is also said to have been a torchbearer at the rites of Apollon Zosterios . He is also said to have heard lectures from the natural philosopher Anaxagoras and the sophists Prodikos and Protagoras .

Important life dates arise above all from his participation in the tragedy competitions that were organized in Athens on the occasion of Dionysia (a city cult event for the theater god Dionysus). Between 455 and 408 BC BC Euripides regularly brought tetralogies (consisting of three tragedies and a satyr play of a rather grotesque character) to the stage in the tragic agon . With his first competition entry Die Peliaden (lost), he took third place. His first victory falls in the year 441 BC. In the year 428 BC He won with the surviving The wreathed Hippolytos , which was the arrangement of another Hippolytos piece listed and heavily criticized a few years earlier. Overall, he won four times during his lifetime and with a posthumous tetralogy, to which the famous play The Bakchen belongs.

The poet was a friend of Socrates who - although he was not a fan of such events - even went as far as Peiraius when Euripides had a play performed there.

Shortly after Dionysia in 408 BC BC Euripides accepted the invitation of the Macedonian king Archelaos I , in whose capital Pella he visited at the beginning of spring 406 BC. Chr. Died. According to legend, he was torn apart by wild dogs in Bromiskos ; However, this legend is to be understood more symbolically as a description of his work, in which the Dionysian eruptive ecstasy plays a central role.

The Hecabe of Euripides. Original text with a Latin translation and marginal notes by the humanist Leonzio Pilato in a manuscript written in 1362. Florence, Biblioteca Medicea Laurenziana , San Marco 226, fol. 1r 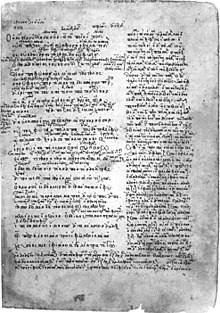 List of lost, preserved or fragmentarily transmitted pieces by Euripides with the performance dates that have survived or have been made accessible.

Sophocles is said to have put on mourning robes on the news of the death of Euripides; its actors and choristers appeared without a wreath. In Athens, a cenotaph - an (empty) memorial tomb - was erected in his honor and three of his left behind were crowned posthumously.

Soon after the death of Euripides, his paramount importance was recognized, which was reflected, among other things, in the fact that he was the most frequently performed and read tragedy throughout ancient times. Of particular importance is his influence on the new comedy, especially its main representative Menander .

Of the grand masters of the Athenian tragedy, Euripides was the most problematic and modern, which earned him criticism.

Aristophanes is responsible for a picture of Euripides characterized by the grotesque distortions of the old comedy, which has been decisive up to the modern age.

A critical discussion between Christoph Martin Wieland and Euripides led Johann Wolfgang Goethe to his farce Götter, Helden und Wieland . Although made ridiculous by Goethe in it, Wieland showed understanding for Goethe's Sturm und Drang and even recommended the farce to the readers of his magazine as a good read.