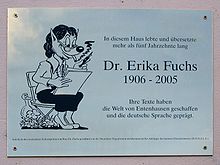 Erika Fuchs was the second of a total of six children from Auguste geb. Horn (1878–1964) and August Petri (1873–1954). Auguste Horn came from Munich , was a trained singer, worked as a primary school teacher and had taught in Augsburg . She met August Petri , who came from Lippe-Detmold , in a student corps , where there were slight reservations about the emancipated Auguste. Soon after Erika's birth, the family moved to Reichenbach in Silesia , from there to Belgard an der Persante in 1912 . August Petri was director of the overland works for Western Pomerania there . The family was reasonably wealthy; so the Petris owned the only car in town and the children grew up in a large house with servants . The family staff included a nanny and a housemaid; a cook and a gardener also worked in the household.

The children were brought up very strictly by their father; Erika Fuchs later reports: “At home there was no argument or discussion. Orders were given and obeyed ”. Since the six children were only nine years apart in terms of age, they led a fairly independent and independent life, about which Ms. Fuchs says: "In any case, we had a tremendous amount of exercise."

Music played an important role at home; her mother regularly had guests visiting who accompanied her singing, and people liked to sing while doing housework and kitchen work.

Erika Fuchs attended primary school in Belgard for three years, then from Easter 1913 the secondary school for girls, about which she judged: “We did a lot of nonsense and learned little. We only found out about the spiritual wealth in the world when we got a real teacher for German and history. ”This teacher regularly invited the students to her home and introduced them to the works of important artists. Enthusiastic about what they learned from their teacher in terms of interesting facts that was not taught in school, Erika Fuchs and her friend Asta Hampe decided in 1921 that they wanted to go to high school. Erika's father supported her in this request; However, there was no girls 'high school in Belgard, so a vote in the city council was necessary to enable the two girls to attend the boys' high school. The city council agreed and Erika and her friend were initially released from school for a year to catch up on the necessary teaching material in Greek and Latin. Since Asta Hampe moved to Hamburg, Erika Fuchs was the first girl to attend classes at the local boys' grammar school. In 1926 she completed her school years with a high school diploma.

She then majored in art history , along with archeology and medieval history. In the first summer semester she was in Lausanne , the winter semester 1926/27 she spent in Munich , the third and fourth semester in London , and then from 1928 until the exam in the winter semester 1931/32 she studied again in Munich. During her studies she traveled a lot abroad; she spent a few months in Florence and went to Holland , England , Italy and Switzerland . On July 17, 1931, he did his doctorate on the baroque sculptor Johann Michael Feichtmayr (1709–1772) with the title Johann Michael Feichtmayr: A Contribution to the History of German Rococo . Her work, for which she conducted extensive research in church archives and which was illustrated with 160 photographs of her own, was rated magna cum laude . It did not appear in print until 1935, still under the maiden name.

She met her husband Günter Fuchs (1907–1984) during her studies. He was a manufacturer and inventor, and since 1973 honorary professor at the Technical University of Munich , where he taught "Technical Morphology". From 1931 to 1984 he managed the company "Summa Feuerungen", a factory for modern ovens. They married in 1932 and had two sons. From 1933 the couple lived in Schwarzenbach an der Saale , in the Hof district . Günter Fuchs built everything in the house right down to the furniture himself; the furniture is now in the Munich City Museum .

When it came to technical things in the comic book stories, Erika Fuchs asked her husband: "What he makes real and reasonable, I muddle up again so that it gets a little crazy", she explained in 1978. Her husband was not only in Knowledgeable about technical things, he was also a specialist in quotes from classics.

Erika Fuchs died on April 22, 2005 at the age of 98 in Munich. She was buried next to her husband Günter Fuchs, who died in 1984, in the Schwarzenbach an der Saale cemetery .

After the Second World War she worked as a translator , first for the German edition of Reader's Digest , before she took on other translating jobs for other American magazines. In 1951 she finally became editor-in-chief of the newly founded German Mickey Mouse , which she had a lot of influence on in the years that followed. In 1988 she retired.

It was mainly through their known translations of American Disney - comics , especially the stories of Carl Barks around the family Duck . In contrast to the English models, their translations contained countless hidden quotations and literary allusions. As an excellent literary expert, she was firmly convinced that one could not be sufficiently educated as a translator of comics. The closeness to German classical music appears when Tick, Trick and Track, based on Schiller's version of the Rütli oath, promise: “We want to be a united people of brothers, in no need to wash and danger.” Also almost always as their creation The saying "Nothing is too swear for the engineer " is not an invention of his own, but a modification of the first line of the engineer song by Heinrich Seidel (1842–1906), published in Glockenspiel in 1889 ("Nothing is too difficult for the engineer").

Influence on the German language

Erika Fuchs consistently used verbs shortened to the root of the word ( inflectives ) for things that are difficult to depict , both for noises ( onomatopoeia , for example rustling, rattling, moaning, creaking, climax ) and for psychological, non-noisy processes (brooding, swallowing, trembling) . The use of the inflective form for the visual representation of non-visual processes is also called ericative in her honor .

Erika Fuchs' linguistic influence in everyday language usage and in pop culture is enormous to this day. The culture shaped by their own creative translations is the subject of so-called Donaldism . In the features section of the Frankfurter Allgemeine Zeitung , among others , Donald Duck quotations from Erika Fuchs appear regularly in a aesthetic context - primarily as headlines and captions. 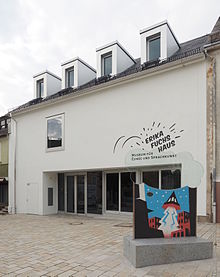 In 1994 she was awarded the Morenhovener Lupe . In 2001 she received the special prize for the Heimito von Doderer Literature Prize and the Roswitha Prize of the city of Bad Gandersheim .

Erika Fuchs was an honorary member of DONALD ( German organization of non-commercial supporters of pure Donaldism ). Members of this association, namely Patrick Bahners and Andreas Platthaus , occasionally adorned the headlines of the FAZ feuilleton with Fuchsian linguistic gems, which was often only accessible to connoisseurs.

In addition, she was photographed and painted by Disney and Carl Barks admirer Gottfried Helnwein in 1991 for a cycle of paintings ( 48 portraits , oil and acrylic on canvas, each picture 70 × 55 cm) under the motto “The 48 most important Women of the Century ”. Shortly afterwards, the art collector and museum founder Peter Ludwig acquired the 48 portraits that are now part of the collection of the Museum Ludwig in Cologne.

In 2005 the German rock musician Farin Urlaub dedicated his second solo album Am Ende der Sonne to her .

In 2012 the city ​​of Schwarzenbach an der Saale decided to set up a museum for Erika Fuchs. The Erika-Fuchs-Haus - Museum for Comic and Language Art was opened on August 1st, 2015 after a three-year construction period.