Dzierżoniów [ ʥɛrˈʒɔɲuf ] ( German : Reichenbach in the Owl Mountains ) is a city in the Polish Voivodeship of Lower Silesia . It is the county seat of the Powiat Dzierżoniowski ( Reichenbacher District ), forms its own municipality and is also the seat of the Gmina Dzierżoniów , a rural municipality that includes the villages north and east of the city. 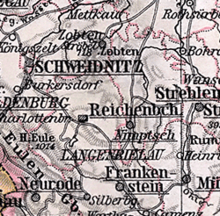 Reichenbach ( Reichenbch. ) And its neighboring towns on a map from 1905.

Town hall on the ring.

Dzierżoniów is located approximately in the middle of a settlement strip running on the eastern edge of the Owl Mountains, which was within the Preseka and was settled in the first half of the 13th century. Since the settlement band has a uniform division of the hooves , the places exposed there probably arose at the same time. After Peilau, located to the south-east, was named as a model for other foundations under German law as early as 1230, Reichenbach must also have been founded before 1230. It is first mentioned in 1250 with a Heinrich von Reichenbach ("de Richenbach"), who is documented as a locator in Brieg and came from the Reichenbach hereditary bailiffs, the later Counts Reichenbach . For the year 1258 the church of St. Georg and the mayor Wilhelm von Reichenbach are documented, who held the office of Reichenbacher Vogt in 1266 . It probably had its seat in the fortress on the city wall, which was called "Hummelschloss" or "Homole". As in the surrounding weaver villages, cloth- making also played an important economic role in Reichenbach from the start. Dressmakers who formed a guild in 1369 are mentioned as early as 1268 .

With the division of the Duchy of Breslau , the area along the edge of the area came to the newly formed Duchy of Schweidnitz . In 1296 a hospital with the church of St. Barbara was built in the suburb of Frankenstein, which was probably built by the Order of the Holy Grave . Around this time a cemetery was laid out in front of the Schweidnitzer Tor and the burial church of St. Maria was built. The town hall is occupied in 1337 and a year later the Johanniter , who had been given the church patronage over St. George, set up a commander . A monastery of the Augustinian hermits had existed since 1349 at the latest . After the city acquired the bailiwick in 1350, it also exercised jurisdiction in its Weichbild , which consisted of about 30 villages. In addition, she obtained the rights of the hereditary bailiwick. Thanks to its economic position, it was able to acquire the miles , brewing and salt rights as early as the 14th century . In addition, she had the right to levy customs, fish in the Peile and hunt in Ernsdorf.

After the death of Duke Bolko II. In 1368, Reichenbach fell together with the Duchy of Schweidnitz-Jauer in 1368 to the Bohemian King Wenceslaus , who was a son of Queen Anna of Schweidnitz . However, Bolkos II's widow, the Duchess Agnes von Habsburg , was entitled to a lifelong usufruct . This is probably the reason why a burgrave is first attested to the ducal castle in 1369. It was the knight Wasserrabe von Zirlau , who was probably used by the Dowager Duchess. Other verifiable burgraves were Franz von Peterswaldau in 1422 , Dietrich von Peterswaldau in 1469 and Moritz von Peiskersdorf in 1532. In 1428 Reichenbach was hit by the Hussites . After their departure, the fortifications were reinforced by a second city wall. From about 1525 the Reformation spread in Reichenbach . The Augustinian monastery was abandoned in 1525.

In the 16th century and the beginning of the 17th century Reichenbach experienced an economic boom. In 1582 the Reichenbacher Züchnerzunft got the permission to produce Barchent . This increased the number of their masters from 178 in 1606 to 316 in 1626. At the same time, however, the number of cloth makers decreased. In 1549 Reichenbach obtained two more fairs and in 1632 a miles privilege for the linen trade. Beer production also played an economic role. For the year 1564 144 beer yards are occupied.

Reichenbach's economic position was weakened by the Thirty Years' War , which was accompanied by contributions, billeting and destruction, but also disease and religious persecution. The Counter Reformation was carried out during the war . Nevertheless, around three quarters of the population were still Protestant around 1666/67. There was a renewed economic boom in the textile industry in the 18th century, when the production of barchents and canvas could be increased. Friedrich Sadebeck , who imported Macedonian cotton and had it spun in Reichenbach and the surrounding weaving villages and woven on around 850 looms, played an important role as a textile merchant .

After the First Silesian War , Reichenbach fell to Prussia in 1742, together with the hereditary principality of Schweidnitz, which had been in Bohemia since 1368 . Subsequently, a Protestant congregation was founded, which initially had a residential building on the Ring converted into a prayer room. During the Seven Years' War , the Battle of Burkersdorf took place on July 21, 1762 between Reichenbach and Schweidnitz , in which the Austrians were forced to give up the siege of Schweidnitz. On August 16, 1762, the battle of Reichenbach took place.

After the reorganization of Prussia, Reichenbach was the seat of the Reichenbach administrative district from 1816 to 1820 . Also since 1816 it was the seat of the Reichenbach district , with which it remained connected until 1945. In 1855 Reichenbach received a railway connection to Schweidnitz , which was extended to Frankenstein three years later . In 1891 the railway connection to Langenbielau followed and in 1900/03 it was connected to the Eulengebirgsbahn , which led to Wünschelburg below the Heuscheuergebirge . Ernsdorf had already been incorporated into the municipality in 1890.

During the Second World War , there was a satellite camp of the Groß-Rosen concentration camp in Reichenbach from June 1944 to January 1945 . After the end of the war, Reichenbach was placed under Polish administration by the Soviet occupying power, along with almost all of Silesia . The place name was initially Polonized as Rychbach ; In 1946 the city after the bee researcher was Johann Dzierzon in Dzierżoniów renamed. Unless they had fled before, the German population was expelled by the local Polish administrative authority . Some of the newly settled residents came from the areas east of the Curzon Line that had fallen to the Soviet Union as part of the “ West displacement of Poland ” .

From 1945 to 1948 there was a Polish Jewish commune in the city under the leadership of Jakub Egit . From 1975 to 1998 Dzierżoniów belonged to the Wałbrzych Voivodeship ( Waldenburg ).

According to the legend about the origins of the city of Reichenbach, the first settlement was built in 300 by a Roman general named Lucca together with Franconia and Wenden . He also had a temple built near the monument to the ancient Slav god Swantevit , which is standing in the forest . After the broken-in Hungarians were defeated and persecuted by Duno von Askanien and Siegfried von Ringelheim at the Battle of Merseburg in 925 , they sank their treasures in a stream near what would later become Reichenbach. An army leader of Emperor Heinrich I found out about this and fished the brook for his master. With the treasure found, Heinrich I had the settlement converted into a town that was named Reichenbach by the rich find.

Panorama from the ring in Dzierżoniów

Towns and municipalities in the powiat Dzierżoniowski