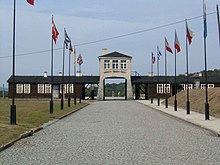 Groß-Rosen Memorial (2005); Above the entrance gate the saying work makes you free 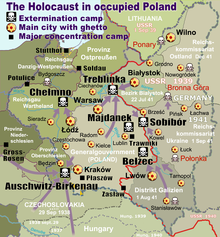 Map of the German concentration and extermination camps in western Poland, 1939–1945

Groß-Rosen concentration camp in a model 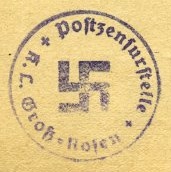 The commanders were Arthur Rödl , Wilhelm Gideon and Johannes Hassebroek .

The construction of the Great Camp, with an original capacity for 7,000 prisoners, but increased to 20,000, was completed by the beginning of 1944. At this point in time, the Groß-Rosen concentration camp was expanded again. The Auschwitz camp was planned for 45,000 prisoners and should be used for a relocation of the Auschwitz concentration camp because of the front shifts in the east.

Since 1943, the Gestapo in Breslau has also operated a labor education camp here .

The inmates of the main camp were used to mine granite in the Groß-Rosen quarries , which were exploited by the SS owned Deutsche Erd- und Steinwerke GmbH (DEST). 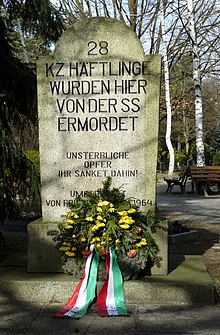 Memorial stone for concentration camp prisoners who were murdered on a death march (2008).

At the beginning of 1945 the SS evacuated the camp; the prisoners were deported or sent on death marches . Only a few prisoners remained and were liberated by the Soviet army on February 13, 1945 .

Since 1942 the National Socialists began to expand various subcamps , so u. a. the Wroclaw (Lissa) labor camp. Further expansion began in 1944. Numerous sub-camps with over 100 external commandos served to bring cheap labor to the factories of the so-called war-important industry in Lower Silesia . There were also forced labor camps for Jews, e. B. in Dörnhau . These were taken over by the Schmelt organization . The nerve gases tabun and sarin were produced in the Dyhernfurth subcamp .

A large sub-camp was the Riese labor camp , which was made up of 4 large and 12 smaller camps. These were administered by the Todt Organization . Today it is estimated that a total of 13,300 people were housed in the satellite camps from 1943 to 1945, of whom 3,648 died. The guards consisted of around 900 people. Even after the liberation by the Red Army in 1945, many former concentration camp prisoners died as a result of their stay in the camp, so that a total of around 5,000 dead can be assumed.

Another satellite camp was the Brünnlitzer armaments factory of Oskar Schindler .