The title of this article is ambiguous. Further meanings are listed under Lower Silesia (disambiguation) . 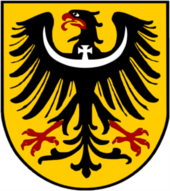 Coat of arms of Lower Silesia 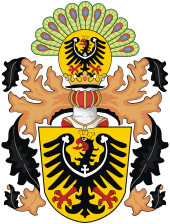 Information board "Lower Silesia" on the A 4

Lower Silesia ( Silesian : Niederschläsing ; Polish : Dolny Śląsk ) is the north-western part of the Silesia region . It extends around the middle reaches of the Oder . From the middle of the 14th century until 1742 it was a sub-country of the crown of Bohemia . After the transition to Prussia in 1742, it belonged to the province of Silesia from 1815 , which was divided in 1919. Then it formed the Province of Lower Silesia . As a result of the Second World War, in 1945 most of it fell to Poland, along with most of Silesia. This larger part of Lower Silesia today forms the Lower Silesian Voivodeship . The smaller part, which remained with Germany, has belonged to East Saxony since 1945 . Breslau was the capital of the historical duchies in Silesia , the Prussian province and the Breslau voivodeship that existed in the meantime . Today it is the capital of the Lower Silesian Voivodeship.

Towards the end of the Second World War , the Prussian province of Lower Silesia was occupied by the Red Army in February 1945 and shortly thereafter placed under Polish administration. Unless the residents had fled the towns and villages, they were subsequently expelled and new Polish residents settled in the region.

The expulsions took place in the part of Lower Silesia east of the Neisse . In the German-Polish border treaty of 1990, a renunciation of force was agreed in this context. When the voivodships were reorganized in 1999, the historical borders of Lower Silesia were partially taken into account again.

Lower Silesia is developing positively economically, and Wroclaw is particularly successful . The city and its surroundings are among the most popular investment locations in Poland. In Wrocław, a new international terminal at the Nicolaus Copernicus Airport was built until it went into operation in March 2012 .

After several district area reforms, the German part of the former province of Lower Silesia is now divided between the Saxon districts of Bautzen and Görlitz and the Brandenburg district of Oberspreewald-Lausitz .

Kromlau , Jämlitz and Tschernitz belonged to the Duchy of Sagan for centuries and were Silesian exclaves in Lusatia until they were reclassified to the province of Brandenburg after 1815 during a border adjustment . For even longer, namely until 1945, Pechern belonged to Silesia - in a corner of the Duchy of Sagan reaching over the Neisse.

The traditional transport axis of Lower Silesia is the Oder and roads running parallel to it. Many cities have historically emerged at places where the Oder could be crossed. The Via Regia also ran from west to east . The area is crossed by the old Amber Road in a north-south direction . In 1846 the Lower Silesian-Märkische Railway was built, which connected Berlin with Breslau. In 1847 Görlitz was reached from the east from Breslau-Kohlfurt , creating a continuous connection from Breslau to Dresden . The mountainous regions in southern Silesia were opened up by the Silesian Mountain Railway, in the north important connections were created by the Breslau-Schweidnitz-Freiburg Railway Company . After the Second World War, the connections to the Polish heartland such as Łódź or alternatively via Poznan to Warsaw and the Wroclaw-Stettin connection became more important. There are also motorways and expressways such as the A4, A8 and A18. There are airports in Zielona Góra-Babimost (Grünberg-Bomst) and Breslau .

The center of the German part of the former Lower Silesia is Görlitz, where the federal motorway 4 crosses the Neisse. In 1847 the Dresden – Görlitz railway line was opened. The Görlitz station is reached Poland by rail connections from Berlin, Dresden and Zittau as well as connections from the direction.