The title of this article is ambiguous. Further meanings are listed under Bolesławiec (disambiguation) .

Bunzlau is a redirect to this article. Further meanings are listed under Bunzlau (disambiguation) .

The city is known for the Bunzlau ceramics and the German baroque poet Martin Opitz .

The city is located in Lower Silesia on the east bank of the Bober , around 75 km south of Zielona Góra ( Grünberg ) and 130 km east of Dresden

Plan of the city of Bolesławiec, 1882 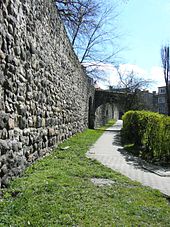 Fragment of the medieval city wall

Wilhelminian style residential and commercial building on Ring 28 from 1900 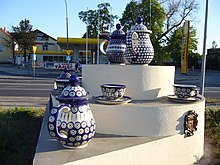 Bolesławiec was first mentioned in 1201 as Bolezlauez ( lat: Boleslavia ). After the invasion of the Mongols in 1241, against which Bunzlauers are also said to have fought, the place was granted city rights and it was likely that the city was rebuilt at this time. The representation of a city wall, which can be found on today's coat of arms, is first used in a seal in 1316. In 1346 the city came under the rule of the Bohemian Crown.

During the Hussite Wars , the city suffered heavy damage in 1429. After the city had recovered from the damage caused by the war, the construction of a modern double city ​​wall began in 1479 to protect the city from being taken again. In the course of the reconstruction of the city, the Marienkirche was then rebuilt in its current Gothic form from 1482 .

Pottery gained importance in the city early on, and the city's potters' guild was first mentioned in 1511. After 1522 a large part of the city's population became Protestant and Bunzlau became an important center of the Reformation . The town's landmark, the town hall, was rebuilt by Wendel Roskopf in 1525 . In the same year the construction of a sewer system began in Bunzlau , which was completed in 1565. With this unusual and elaborate construction work, Bunzlau thus owned the first German sewer system. The city's first pharmacy opened in 1558 . At the end of this very important century for Bunzlau, the famous German Baroque poet and founder of the Silesian School of Poetry, Martin Opitz , was born in Bunzlau in 1597. He created a new kind of poetics in German poetry and was also referred to as the father and restorer of poetry .

Towards the end of the Thirty Years War , Bunzlau was devastated by Swedish troops under General Torstensson . From 1752 to 1756, the Protestant community built a stone church on the site of the former castle that was destroyed by the Swedes. In 1753 the master potter Joppe created the large pot .

On May 29, 1812, Emperor Napoleon traveled through Bunzlau on his way to Russia and was cheered. On December 13 of that year he returned "in humble silence". After a short stop in Bunzlau, Napoléon Bonaparte set out for Saxony. In 1816 Bunzlau became the district town of the Bunzlau district . From 1844 to 1846 the well-known 450 m long railway viaduct was built over the Bober , part of the first railway connection between Berlin and Vienna through Breslau and the Moravian Gate . In 1897 the Royal Ceramic Technical School was founded in Bunzlau , which was renamed the State Ceramic Technical School in 1922 . The Bunzlau ceramics became famous . Around 1900 Bunzlau had a Protestant and a Catholic church, a synagogue , a grammar school, a Protestant teacher training college, a district court and a number of different manufacturing companies.

In 1945 belonged to Bolesławiec County Bolesławiec in district Liegnitz the Prussian province of Silesia of the German Reich .

Towards the end of the Second World War , Bunzlau suffered severe destruction, so that 60% of the buildings were in ruins. The Red Army captured the city on February 11, 1945. After the end of the war, Bunzlau was placed under Polish administration by the Soviet occupying forces . The Poles introduced the place name Bolesławiec for Bunzlau . In the following years the local German population was expelled from Bunzlau by the local Polish administrative authority .

In the 1950s, the reconstruction of the city began. The former narrow old town buildings were not restored, and the status of the best preserved Silesian old town no longer fell to Bolesławiec. Nevertheless, the rebuilt old town is worth seeing today. After the district reform of 1975, the city lost its function as a county seat, but in 1999 the powiat was restored. 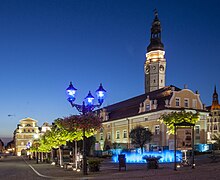 Bolesławiec has a more than 9000 m² square ring, most of which was rebuilt after the Thirty Years War. The baroque town houses date from this time. There are also houses from the Renaissance and a building from the late Gothic . After the destruction at the end of the Second World War , the ring was rebuilt and today forms a closed ensemble with the town hall in the middle.

The Catholic parish church of the Assumption of Mary (kościół Wniebowzięcia NMP) was mentioned as early as the 13th century . It was destroyed in the Hussite Wars in 1429 and then rebuilt from 1482 to 1493. A three-aisled Gothic building was created that extends over four bays . In 1524 the people of Bunzlau converted to Protestant teaching. The first preacher was called Jacob Süssenbach. The church became Protestant and remained so until 1629 and then again from 1632 to 1637. During the Thirty Years' War it suffered destruction like the whole city in 1642 when it was set on fire by the Swedes. It was rebuilt in 1692, although the late Gothic appearance was retained. In 1928 the church was given its characteristic neo-Gothic spire. The gothic main portal and the entrance stairs are worth seeing, on the parapet there are four baroque saints by Georg Leonhard Weber , which were formerly placed on the Niedertorbrücke.

From 1938 until his death in prison in 1946, Paul Sauer was the parish priest and dean at the Assumption of St. Mary.

On October 7, 2012, the parish church in Bunzlau was elevated to a minor basilica .

In the course of the counter-reformation of the Habsburgs, the parish church was finally returned to the Catholics in 1640 and the Protestant majority of the population in Bunzlaus no longer had a church. Only under Prussian rule (from 1742) could the community be re-established, in 1752 the old castle was transferred to the Protestants, where the construction of a Protestant church began. Completed in 1756, the large baroque hall church presented a very simple picture. Later, in 1834–1835, the 73 m high sandstone bell tower was added in the neo-Gothic style. The Second World War brought destruction and since the remaining German parishioners had been expelled, the unused building became increasingly dilapidated. In 1967 the building was finally renovated, removing a gallery and in 1970 it was converted into the Catholic parish church (kościół pw. Matki Boskiej Nieustającej Pomocy) . 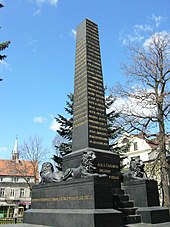 In honor of the Russian Field Marshal Mikhail Illarionowitsch Kutusow , who died in Bunzlau, King Friedrich Wilhelm III donated. A memorial on the market square in 1819. The 12 meter high obelisk, flanked by four Schadow lions, was designed by Karl Friedrich Schinkel and cast by the Royal Iron Foundry Berlin . In 1892/93 the monument in the area of ​​the southern city wall was given its current location. The original lettering in German and Russian has been preserved.

Seat of the rural community of Bolesławiec - the former Dominican monastery 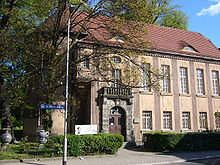 The ceramics museum (Muzeum Ceramiki) emerged from the local history museum founded in 1908, which is an extension of the medieval kennel tower of the city wall. The City History Museum Department (Dział Historii Miasta) is housed in a neo-classical building in which Mikhail Kutuzov died and which later housed the Kutuzov Museum .

In 1753 the Bunzlau potter Gottfried Joppe made the large pot . With a height of 2.20 m, a circumference of 4.20 m and a weight of 12 pounds, it was the largest example of Bunzlau ceramics . In 1813 the French caused some cracks, after which it was held together or patched up with a wire mesh. In 1945 it was destroyed when the city was conquered.

There is a city ​​partnership with the city of Siegburg . There is also the seat of the Bundesheimatgruppe Bunzlau, which among other things maintains a museum Bunzlauer Heimatstube . The Saxon city of Pirna has been another twin town since 1980 . Bolesławiec is also a member of the Union of European Napoleonic Cities .

→ Main article : List of personalities of the city of Bolesławiec

Towns and municipalities in the powiat Bolesławiec