Heraldic emblem of a minor basilica : the umbraculum 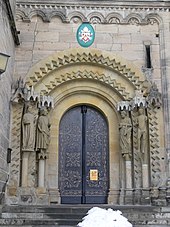 Bamberg Cathedral : The Pope's coat of arms of Benedict XVI. above the portal indicates the status of a minor basilica .

Basilica minor ("smaller basilica", in contrast to the six basilicae maiores ) has been a special honorary title that the Pope can bestow on an important church building since the 18th century . The granting of a title Basilica minor aims “to strengthen the bond between the individual churches and the Roman bishop and to emphasize the importance of this church for the surrounding area”.

There are no structural criteria for the title Basilica Minor ; central buildings like the Liebfrauenkirche (Trier) can also receive this title. After the award of the title, the buildings and flags of a minor basilica can bear the crossed keys, as can be found on the papal coat of arms . The padiglione , a yellow-red striped cone-shaped silk umbrella, which originally served to protect priests and cantors during processions, and the tintinnabulum , a liturgical bell, are no longer mandatory as insignia of a minor basilica .

The procedure for obtaining the title of Basilica minor is regulated today in particular by the Acta Domus ecclesiae de titulo basilicae minoris of the Congregation for Divine Worship and the Order of the Sacraments of November 9, 1989. Certain requirements are connected with the award of the title: “Personnel and structural equipment for an exemplary Celebration of the renewed liturgy and frequent preaching and confessional service . The insignia of the Pope [...] must be affixed to the basilica, the Petrine-Papal festivities must be celebrated, the Roman pronouncements must be studied and disseminated in religious education work. "

Worldwide, 1766 churches currently bear the title Basilica minor (as of December 31, 2017), 571 of them in Italy. Important pilgrimage churches are given this title. A basilica minor can be recognized by the papal coat of arms of the incumbent or lending Pope above a portal or at another prominent place. Of a higher rank than a minor basilica , the title Basilica Maior is reserved for the six highest-ranking Roman Catholic places of worship, four of which are in Rome and two in Assisi .