Saint Paul Outside the Walls

Saint Paul Outside the Walls ( Italian San Paolo fuori le mura , Latin ecclesia Sancti Pauli extra muros ) is one of the papal basilicas in Rome . It lies between today's Via Ostiense and the Tiber and is therefore often called the Basilica Ostiense . Since the Lateran Treaty was signed in 1929, it has been an extra-territorial property of the Holy See and one of the seven pilgrimage churches of Rome.

GB Piranesi : previous building, as it was in the 18th century 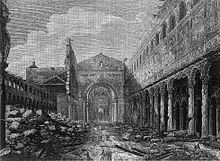 Luigi Rossini: The original basilica after the fire in 1823 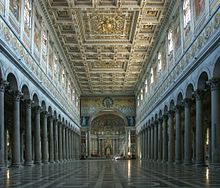 View of the apse through the main nave with coffered ceiling 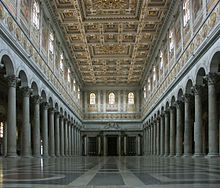 View of the front part of the main nave 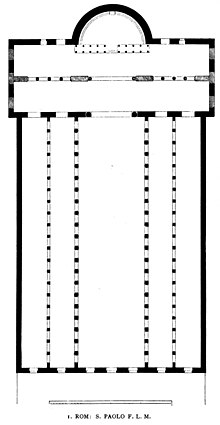 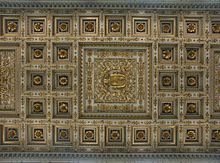 The coffered ceiling of the basilica 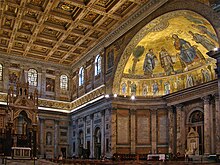 View through the transept to the south. On the left the ciborium with papal altar, under which the Paul's tomb is supposed to be located, on the right the apse with papal cathedra. 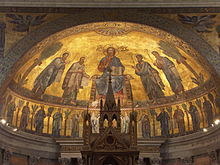 The name derives from its location outside the still preserved ancient Aurelian city wall . As a Roman citizen, the apostle Paul was supposedly beheaded outside the city around AD 67. Tradition had this place called ad aquas salvias ("on the waters of life"), today Tre Fontane ("three springs"). The body of the apostle is said to have been buried further into town on the Via Ostiense in a Roman necropolis. The first Paul basilica was built on behalf of Emperor Constantine over the presumed tomb of the Apostle Paul, presumably consecrated in 324 and already considerably enlarged in 386. A Benedictine abbey has existed in St. Paul since the time of Pope Gregory the Great († 604) .

This only still intact ancient large church in Rome was badly damaged by a fire on the night of July 15-16, 1823. The fire was caused by the negligence of the workers who restored the roof. The architect of the reconstruction, Luigi Poletti (1792–1869), also had relatively well-preserved parts of the central and side aisles and the undamaged bell tower torn down. Pope Leo XII. In a circular dated January 15, 1825, asked all bishops for donations from the faithful for the reconstruction of the basilica . The dimensions of today's basilica are based on the model of the old church and were built in 1854 by Pope Pius IX. inaugurated. At the beginning of the 20th century, according to a design by Guglielmo Calderini , a four-sided columned hall ( quadriportico ) was built in front of the main facade , in the center of which there is a statue of the Apostle Paul by Giuseppe Obici (1807-1878).

In the basilica Pope Benedict XVI opened on June 28, 2008, together with the Ecumenical Patriarch of Constantinople Bartholomew I, the Pauline year commemorating the 2000th year of the apostle's birth. For this occasion, the panels of the doors of the left portal were redesigned with bronze reliefs.

Today's basilica, built according to a design by Luigi Poletti, corresponds in size to the original, late antique building. Despite the rich marble and alabaster work, the interior lacks the delicacy of the original furnishings . The new building which was, for example fluting of the columns omitted. Nevertheless, the column forest, which divides the basilica into five naves, reflects the original spatial effect and thus also gives an idea of the effect of the similarly dimensioned and constructed basilica Ulpia on the Trajan's Forum . The facade is adorned with a mosaic that comes from the Vatican's workshop. The Porta Sancta is located on the right in the vestibule .

The ciborium that rises above the tomb of the apostles dates from the 13th century by the hand of Arnolfo di Cambio . On the main altar below, under which there is the 1600-year-old sarcophagus of the Apostle Paul, traditionally only the Pope celebrates Mass - as in St. Peter's Basilica . The grave was only subjected to further examinations since 2003 after more than 150 years.

Above it stands the triumphal arch , a gift from Empress Galla Placidia in the 5th century. The arch, the canopy and the apse with the mosaics from the 13th century are the only pieces of equipment from ancient times. The windows made of "Egyptian alabaster" ( onyx marble ) are a gift from the Viceroy Mohammed Ali of Egypt and the malachite altars in the transept were donated by Tsar Nicholas I.

An important work of art near the altar is the monumental, column-shaped Easter candlestick , which above carries the bowl for the Easter candle . Its rich relief decoration shows mythological and Christian references. His resurrection and ascension are depicted above scenes from the Passion of Christ . The work was made in the late 12th century by Pietro Vassalletto and Niccolò di Angelo . 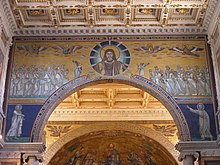 A long ribbon of 265 medallions with portraits of the popes stretches across the pillars . The portraits of popes before the sixteenth century are imaginary. Realistic portraits have only been used as models since the 16th century. According to a legend, Christ comes again when there is no more space for another medallion. When there were only three vacancies left under John Paul II , 25 more places were created, so that 26 places are still available today.

The organ in the left transept has a complicated and curious history. It is one of two symmetrical organs that stood in the main church of San Giovanni in Laterano . The left was built in the years 1843–1845; the one on the right, probably a work from the famous Serassi organ builder , was acquired by the Lateran Cathedral Chapter in 1857. On the occasion of a renovation of the Lateran Church under Pope Leo XIII. The latter was transferred to Sankt Paul Outside the Walls in 1887, which was not very difficult because the work was on wooden wheels. When in the church of Santa Maria degli Angeli e dei Martiri for the wedding of Victor Emanuel III. With Elena of Montenegro (Jela Petrovich) on October 24, 1896 no organ that was considered sufficient was available, the organ, pulled by oxen, rolled there and returned to St. Paul Outside the Walls.

The instrument received its current late romantic disposition when it moved in 1887. It had a pneumatic keyboard and stop mechanism and three works : "Grand Organo" ( main work ) and "Espressivo" ( upper work ), each operated by a manual, and a pedal work with a total of 36 registers . In 1995 the organ underwent a comprehensive restoration and the pneumatic action was replaced by an electric action . The disposition of the registers remained unchanged.

On December 6, 2006, the Vatican announced that the tomb of the Apostle Paul had been rediscovered in the church . The excavations were carried out in the course of renovation work between 2002 and September 2006 under the direction of the Vatican archaeologist Giorgio Filippi . The unusually large, about 2.4 meters long sarcophagus was found under a late antique epitaph with the inscription Paulo Apostolo Mart ('the apostle and martyr Paul') at the base of the main altar of the basilica, where the tomb of the apostle has been venerated for about 1600 years has been. The crypt was closed around 500 years ago and the exact location of the burial site was forgotten after various renovations and a fire in 1823. It remains uncertain whether Paul of Tarsus really lies in the sarcophagus, as it is not scientifically possible to prove that the person buried here is actually the apostle. Some researchers think it is conceivable that the relics of the apostle at the end of the 4th century were transferred from the original grave in the apse of the Constantinian basilica to the sarcophagus now found in the significantly higher transept of the then redesigned church. After a probe examination of the contents of the sarcophagus, during which material and bone remnants were discovered which, according to a 14-C dating , come from the 1st or 2nd century AD, Pope Benedict XVI showed himself . convinced of the authenticity of the remains in his address at the end of the Pauline year on the day before the feast of Peter and Paul in 2009. After the bones are found in the coffin, which has never been opened before, the grave is made permanently accessible to visitors. 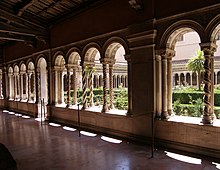 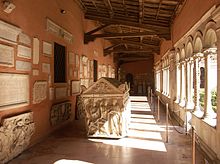 Even under Pope Gregory I the Great, there were men ( San Aristo ) and women ( Santo Stefano ) monasteries near the old basilica . Services were held by a clerical association appointed by the Pope. Since the two monasteries and the basilica fell into disrepair over time, Pope Gregory II renewed the men's monastery in 720 and entrusted the monks with the maintenance of the basilica. When Odo von Cluny visited Rome in 937 , the patrician Aberico II handed over the monastery and the responsibility for the basilica to the Cluniac monastery group of the Benedictines .

The colonnade of the cloister was built by Pietro Vasaletto between 1205 and 1241 and, with its marble inlay, is one of the most artistic in the West. The abbey was a territorial abbey from 1425 to March 2005 , but was converted into a normal abbey under the pontificate of John Paul II. The abbot of the monastery, Giovanni Battista Franzoni , also attended the Second Vatican Council . Pope Benedict XVI specified in his motu proprio the venerable basilica the new status of the abbey. The jurisdiction of the Abbot of St. Paul is therefore limited to the monastery itself. The basilica, like the other patriarchal basilicas, is now subject to an archpriest . Until then, this task was entrusted to a papal administrator, most recently Archbishop Francesco Gioia . Cardinal James Michael Harvey has been the archpriest since 2012 . However, the abbot's liturgical functions in the basilica remained untouched.

The basilica is located on Via Ostiense , about 2 km south of Porta San Paolo . It is about the station Basilica San Paolo the metro line B to reach.

Commons : Saint Paul Outside the Walls  - Album with pictures, videos and audio files

Heritage: Vatican City  (1984) | Historic Center of Rome, the extraterritorial sites of the Holy See in the city and Saint Paul Outside the Walls  (1990)