Preparation of puff pastry, here when " drawing in " a layer of fat

Puff pastry (also feuilletage ) is a multilayered dough . Drawing fat is worked into the basic dough made of flour, salt and water by rolling it out and beating it up several times . The difference to Danish pastry is that no baker's yeast is used for the base dough .

During baking, the dough rises up loose and flaky. Due to the baking heat, the water in the dough evaporates, expands and lifts the pastry. The fat layers act as a barrier, they do not let the steam through and keep it in the dough layer until the dough structure is firmly baked. The rise (the increase in volume) of the dough is only caused by the water vapor produced in the dough, not by additional leavening agents or yeast. This is why this type of production is called " physical loosening ".

Puff pastry is largely tasteless, depending on the taste of the fats used, and is usually made without added sugar. This makes it suitable for both sweet and savory pastries.

A distinction is made between puff pastries according to the way in which the fat is incorporated:

The finished baked goods must not taste like fat. Puff pastries should be crisp and crisp and therefore cannot be cut after baking. Therefore, they are portioned before baking. Dutch puff pastry has a special position due to its compact structure, because the pastry can be cut after baking. Due to this compactness, the doughs are well suited for special baked goods such as puff cake, cake bases , cake toppers.

The difference between pastry and other baked goods tourierten as junk or croissants lies mainly in the dough. The puff is no yeast is added in rubbish comes in addition yeast as a leavening agent used. The doughs also contain sugar , milk and other ingredients , depending on your needs and the recipe . The toured Yufka, Fyllo or Masouka dough , which is also common in Turkish, Greek and Arabic cuisine, is very similar to puff pastry. Variations with oil or yeast are also known.

Today, puff pastry is almost exclusively made by machine. The millimeter-precise adjustment of the rollers on sheeting machines is crucial for the evenness of the later product. With a rolling pin (Austrian. Rolling pin) it requires a lot of force and time needed to achieve the same result.

A layer of butter or margarine mixed with a little flour is wrapped in the very firm dough made of wheat flour , water and salt with a dough yield of 150 . Special, hardened vegetable drawing fat is used in trade and industry . Some bakers add a few drops of vinegar to the dough to weaken the glue structure of the wheat and make it easier to roll out the dough.

Processing must take place at low room temperatures and the dough should be cooled between the rolling phases, otherwise the fat will become soft and the layers will stick together. The production can take several hours. Usually this can be done one after the other. The puff pastry should then rest for a day to be processed into the end product. The puff pastry should be "relaxed", especially with pig's ears.

When touring , the drawing fat is incorporated into the base dough by folding and rolling out several times. The result is the puff pastry. 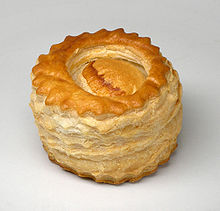 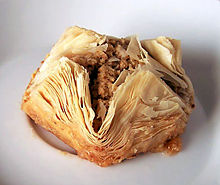 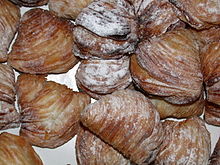 Baked goods made from puff pastry belong to the class of fine baked goods .

It serves as the basis for:

Most cultural historians agree that the principle of puff pastry production originated in the eastern Mediterranean and was made known by participants in the Crusades in Central Europe. It is unclear whether there were pastries made from multi-layered dough in ancient Egypt . The international term filo for paper-thin dough sheets is of Greek origin. As early as the 11th century, a Turkish dictionary contains the term yufka for a pastry made from layers of dough folded several times. Baklava probably evolved from this . Over time, the layers of dough became thinner and thinner. The paper-thin puff pastry was probably made in the court kitchen of the Ottoman Sultan in the Topkapı Palace in Istanbul . The janissaries received baklava as a present every year on Ramadan in the palace. The march back to the barracks was known as the baklava procession .

Since the time of the Crusades, puff pastry has also been mentioned sporadically in Europe, for example in a 1311 charter from the Bishop of Amiens . Around this time, the monks of the Benedictine abbey in Cluny are said to have eaten the pastries regularly. The Venice Council in 1525 banned certain luxury foods at weddings and other family celebrations, including puff pastry. Ottoman influences were not tolerated at Christian weddings. In the 16th century, recipes also appeared in European cookbooks. In 1581, Marx Rumpolt gave instructions for a multi-layered “butter dough”, whereby the individual layers should be wafer-thin “like a veil”. In 1682, the Brandenburg court physician Johann Sigismund Elsholtz mentions a "leaf cake". The term “touring” for dough production was also common back then. Carême is said to have perfected the puff pastry in France at the end of the 18th century. The pig's ears are said to have been invented in 1848 in Café Frascati in Paris .

Puff pastries are also mentioned in the section on Naples in Goethe's Italian Journey with a reference to the easy digestibility of this food.