The title of this article is ambiguous. Further meanings are listed under Croissant (disambiguation) .

Croissant on a breakfast plate

The croissant (from French croissant (de lune) = increasing crescent moon ), croissant , beugel , croissant (in Bavaria and Austria ), cornetto (in Italy ) or also (in Switzerland ) [the (that)] summit (i) is a French pastry made from slightly sweetened, egg-containing Danish pastry . In many textbooks it is stated that good croissants should have a dull, delicate, crispy crust and a flaky crumb . Croissants are popular breakfast pastries. The Austrian croissant or croissants were originally a pastry from a simple yeast dough into croissant shape and were still referred to 1894 in a gastronomic lexicon as yeast pastries. It is controversial whether these can be equated with croissants.

In many bakeries, croissants are also served spicy with cheese gratin or filled with cheese and ham. In addition, in Germany, Austria and Switzerland, the croissant is sold as a sweet variant with chocolate or nougat filling as a chocolate croissant (compare with the pain au chocolat ). Just like the brioches , the croissant is now one of the classic components of a French breakfast , but is now also popular in other countries.

The basic dough for croissants has a lower sugar and higher egg content compared to German Danish pastry. A suitable drawing fat is drawn into this for the production of the Danish pastry , which melts completely at 34 ° C; Such drawing fats are available in plate form under names such as “croissant drawing fat” and similar. Then the dough is folded. A suitable tour for croissants is, for example, folding into 12 layers in a single and a double tour. The dough rest is cool.

To shape the dough pieces, roll the finished dough to a thickness of 3.5 mm and cut off triangular pieces using either a knife or a special croissant cutter, which is rolled over the dough as a roller with several angled blades. These triangles are loosely rolled up, bent into croissants, placed on the tin and left to go. If they ¾ Gare have, they are coated with egg and baked without steam at 210-220 ° C.

In France the croissant is baked with margarine and the croissant au beurre with butter . Croissants without marzipan or chocolate filling are also known as croissant nature . "Butter croissants" in Germany are made exclusively with butter in accordance with food law provisions (Guidelines for Fine Baked Goods, I.11) - this applies to both the yeast dough and the drawing fat.

In southern Germany and Switzerland, a popular variant is the Laugen croissant , Laugengipfeli or Silsergipfeli (named after the town of Sils in the Engadine ). 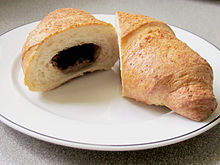 Sliced ​​chocolate croissant with a view of the filling

Cultural historians suspect that various legends about the origin of the pastry (see below) could be fictitious and that the croissant was not introduced in France before the 19th century. The croissant was first mentioned in a reference work under this name in 1853 as an unspecified pastry; In 1863 the moon shape is also mentioned in a lexicon. The first recipe for this did not even appear until 1906 in the Nouvelle Encyclopedie culinaire . "The story of the croissant and its development into a national symbol of France is a story of the 20th century."

The legends were spread among others by Alfred Gottschalk in the first edition of the Larousse gastronomique in 1938 and in another book of his own in 1948, whereby he once stated Vienna and once Budapest as the alleged place of origin.

For the claim that the Austrian Kipferl model was the croissants, there is no historical evidence. For the time of Louis XVI. there is no mention of crescent-shaped biscuits in printed French literature. According to Habs / Rosner, there was almost the same legend for Austrian croissants before 1900 that was also spread about croissants: “With the (...) important role that croissants play in Viennese life, people long ago sought an inventor for looked around the same and ascribed this honor to the laudable master Peter Wendler, who had taken the shape of the pastry in 1683 in derision of the Turkish crescent. "

Various stories are circulating about the invention of the croissant. According to legend, the croissant is said to have been invented after the siege of Vienna by the Turks in 1683. The Turks were digging a tunnel under the city wall, which the Viennese bakers, who were already awake, noticed and sounded the alarm. To celebrate the victory, a pastry was invented that had the shape of the Turkish crescent moon. Another version lets the same story take place in what is now Budapest in 1686, when the city of Buda , now part of the Hungarian capital, was recaptured from the Turks by imperial troops.

In France, according to another legend, croissants were popularized by Marie Antoinette , the wife of Louis XVI. and daughter of Empress Maria Theresa of Austria . The Austrian croissant was therefore renamed in France after the sickle shape of the waxing moon (French croissant de lune ).

The origin of the croissant is common in Austria with the crescents associated depicting the local history as a Viennese invention. Presumably it is a traditional monastery pastry, which was probably baked for Easter - the first bakeries were in monasteries and the shape imitates goat horns, hence the name "croissant". There is evidence that such a shaped pastry was baked from 1000 AD.