This article describes the use of the crescent moon as a symbol; for the astronomical meaning, see moon phase .

Moonship in the night sky

The symbol of the crescent , also referred to as a crescent moon or crescent-is, figuratively usually shown as a shape which results when a circular surface part is removed by a second circular area. The two-sided curved concavo-convex figure with two points is named after the earth's moon and the sickle cutting tool . The symbol is a stylized representation of the moon in the first or last quarter of the moon phases . The crescent moon does not show a crescent in the astronomical sense, as this denotes the phase of the dichotomy in which the moon is half illuminated and appears as a semicircle . Nevertheless, the crescent moon symbol is also referred to as a crescent moon in colloquial language or by the International Red Cross and Red Crescent Movement .

Stylized representations of the crescent moon are very often made in the form of a difference area between two overlapping circular areas. There are various ways of doing this. The radius of the "subtracted" circle can be larger, the same size or smaller than the radius of the circle from which it is subtracted, and the centers of the two circles can have different distances.

The shape of the real crescent moon visible in the sky is geometrically different. The sun always irradiates exactly one half (hemisphere) of the lunar sphere and the day-night boundary is therefore in principle a great circle whose circumference and diameter correspond to the circumference and diameter of the moon or the lunar disc. Except for the new and full moon , the image of this great circle is perspective distorted from the earth to an ellipse , half of which is visible as a terminator on the earth-facing side of the moon. The long axis of this ellipse corresponds to the diameter of the lunar disc, while the short semi-axis is variable and depends on the moon phase. At a half moon, its length is zero and the ellipse becomes a line . Thus, the actual crescent moon is always limited to the outside by the circular arc of the lunar disc, but to the inside by the apparent elliptical arc of the terminator. Therefore, there are no protruding peaks in the real crescent moon, as can often be found in the stylized representations.

In astronomical usage, the crescent moon, in which exactly half of the illuminated surface of the moon is visible and appears as a semicircular surface of the lunar disc, is also referred to as a half-phase (or dichotomy) and thus marks the end of the first quarter as an increasing crescent moon and the beginning of the last quarter of a lunar cycle.

A lying crescent moon - as it can be seen more often in regions near the equator - is also known as a moonship .

Symbol of the red crescent

The symbol of the crescent moon has been seen on flags and coats of arms for centuries , sometimes with a face, see moon (heraldry) .

As astronomical symbol represents the crescent the increasing (☽ - Unicode U + 263D,

or a) Mondfinsternis represent Also, with the same character a. Eclipse are symbolized. The sickle of the waning moon also stands for the moon as a heavenly body.

) is the symbol for the rising moon . The falling moon is

symbolized by a standing crescent moon ( ). The Lilith symbol (

) stands in astrology for the planet Lilith , the black moon or the dark twin of the moon . However, this is not a celestial body, but either the apogee or the second (“empty”) focal point of the eccentric-elliptical lunar orbit.

The crescent moon, open to the right and equipped with a nose, stands - based on the alchemical symbol - for silver in the German imperial stamp on silverware.

In addition, the names of quite different terms refer to a crescent moon-like shape - called here "half moon", for example

Various baked goods have a three-dimensional shape, the section may resemble a crescent moon, including the croissant , the French rolls and croissants . One speaks here of a "croissant shape" because the tips are reminiscent of animal horns . 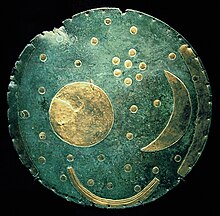 Representations of crescent moon can be found from the 3rd millennium BC onwards. In ancient Egypt , in Mesopotamia and in today's Europe . In the Egyptian lunar calendar , the months were marked with the symbol of the crescent moon. The symbol also stood for the name of the moon god Jah . In addition, the crescent moon (and star) were used to represent the Phoenician goddess Tanit and the Greek goddesses Selene and Artemis , as well as their Roman equivalents, the goddesses Luna and Diana .

The Nebra Sky Disc from the Bronze Age also bears the symbol of the crescent moon or shows an image of the waxing moon in the first quarter.

Coin with Diana and a crescent moon and the inscription “ Byzantion ” (the original name of Constantinople), 1st century BC. Chr./1. Century AD 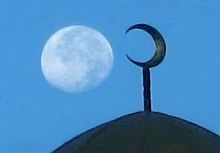 Moon next to the crescent moon symbol of a mosque

The city of Constantinople adopted the crescent moon symbol. According to tradition, she chose it in honor of the goddess Diana . According to other sources, it goes back to a battle in which the Romans defeated the Goths on the first day of a lunar month. In any case, the crescent moon was already a symbol for the city in pre-Christian times.

The original Muslim community did not have a direct symbol of its own. During the times of the Prophet Mohammed , the Islamic armies and caravans carried single-colored flags (black, green or white). Later Muslim generations continued the tradition of the simple black, white or green flag, without emblems, characters or symbols.

For centuries the Ottoman Empire ruled a large part of the Muslim world. Due to the ongoing engagement with Christian Europe , the symbol has also mentally connected with the belief of Sunni Islam and has undergone a change from an old pagan image to the current symbol of Sunni Islam.

The symbol of the crescent moon can also be found in the Christian tradition. It goes back to a passage in the Revelation of John , in which the heavenly appearance of a woman is described:

“Then a great sign appeared in the sky: a woman clothed in the sun; the moon was under her feet and a wreath of twelve stars on her head. "

In the Catholic tradition, Mary is recognized as the mother of Jesus in the female figure and the figure is therefore referred to as the (apocalyptic) crescent moon Madonna or the queen of heaven (Latin regina caeli ) . Others see it as a representation of the “pure church”, the full number of all believers.

Occasionally, the opinion is held that the sickle does not represent the moon, but the planet Venus , which astrology ascribes femininity to and with which, as the morning or evening star, Mary is also associated. The light form of Venus, like that of the moon, can appear as a sickle - but this cannot be seen with the naked eye.