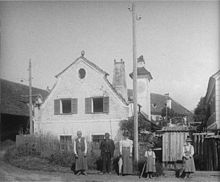 The modern sickle is a tool for cutting small amounts of grain and grass . It consists of a forward tapered, concave curved blade (usually made of steel ) with a wooden handle. It differs from the scythe in that it has a smaller blade and a shorter handle. Grass sickles are short but very strongly curved.

History of the item 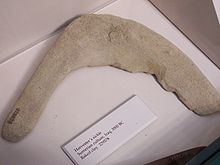 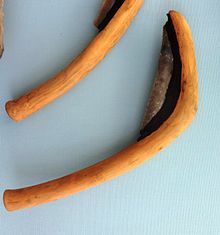 Along with the harvest knife, the sickle is one of the oldest agricultural implements. The oldest sickles were found in the Levant , where they were already used in the Proto- Neolithic to cut off wild grain or grass. The “sickle shine” that characterizes use is not only created when cutting grain (including grass, reeds or leaves). They consisted of bent pieces of wood or antlers into which a few flint blades were glued with pitch , asphalt or burnt lime . Sickles have been made from bronze since the Middle Bronze Age. Axel Steensberg distinguishes between two sickle shapes :

A) the hook sickle (angular sickle), in which the sheet just emerges from the booklet so that the emphasis is on one side

B) the balanced sickle, in which the sheet bends at right or obtuse angles on the handle so that the weight is evenly distributed on both sides

Type B originated in the La Tène period , spread among the Romans and became generally accepted in the Middle Ages.

In Szegvár -Tüzköves ( Csongrád county ) a seated clay statuette of a man with a sickle over his shoulder was excavated. He comes from the Tisza culture and was interpreted by the excavator as a "sickle god". In ancient Greece , the sickle was the symbol of agriculture and thus an attribute of the goddess Demeter .

The clearly asymmetrical, bifacilely retouched sickles are among the most prominent Danish flint artifacts. They date to Period II and III of the older Bronze Age and are particularly common in northwest Jutland . There are a number of sickles ( Danish flintesegle ) from Ærø , but the one from Kallehave is absolutely splendid. It has a length of 17.5 cm. It is a miracle that despite the plowing, it survived for 4,000 years. A comparable example from "Baiersdorfer Plattensilex" (12.6 cm long) was found in 2016 on the Leubinger Fürstenhügel.

Sickle as the flag symbol of the Soviet Union

As a political symbol, it is shown together with the hammer in the coat of arms and also in flags. Crossed with each other, hammer and sickle are a symbol of the workers-and-peasants state in real socialism , e.g. B. on the flag of the former Soviet Union .