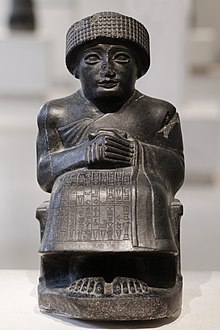 Diorite statue of Gudea from Girsu, around 2120 BC BC, today in the Louvre

The Sumerians are a people who lived in the area of Sumer in southern Mesopotamia in the 3rd millennium BC. Lived. The term Sumerian (from the Akkadian schumeru) comes from a much later time, when ancient Babylonian rulers gave themselves the title “King of Sumer and Akkade” and thus gave the previous people a name in history. The Sumerians called themselves "saggiga", which means something like "the black-headed".

According to today's knowledge, the Sumerians ruled from around the Obaid period until the end of the Early Dynastic III phase, when Akkadians took over dominance during the Akkad period . In the subsequent New Sumerian / UrIII period , the rule of the Sumerians strengthened again briefly, only to be finally replaced by Akkadian rulers in the early Babylonian period.

The Sumerians are currently considered to be the first people to take the step to high culture . In particular, the invention of the cuneiform script , which can be regarded as the original model of today's European scripts, is considered an outstanding achievement by the Sumerians, which began here together with the invention of bureaucracy and artificial irrigation.

Research into Sumerian culture has always been carried out together with the other Mesopotamian cultures. This is due to the characteristics of the hill of ruins, also called tells . The cultures of the Middle East used to level the places partially or completely after destruction, after conquest, but also after certain times and to build a new level on them. That is why it happens such. B. in Nineveh that the top layers contain medieval ruins and the bottom layer up to the time 5000 BC. And goes back further.

Capitals of Mesopotamia in the early Dynastic period

The first archaeological research began by Claudius James Rich when he began in 1812 to systematically measure and partially excavate the ruins of Babylon. Many other researchers followed him. Sometimes they saw themselves in competition with the discoveries of ancient Egypt. It was not long before the territories were divided among the various nations. The French dug in Dur-Sharrukin , the English in Nineveh and the Germans in Assyria and Babylon .

An important point in the history of the Sumerians is the economy and especially the temple economy . So not everyone worked for himself alone in his field, but he did it for the general public or for the temple that collected and administered the harvest. This type of storage brought about administrative problems, which ultimately resulted in the invention of writing for the Sumerians.

In the beginning, the various goods were simply sealed with lumps of clay on which the number of goods enclosed was written. Later, people began to press stamp seals from officials and priests onto the lumps of clay, which with their seal stood for authenticity. In this context, the Sumerians invented the cylinder seal, which not only represented a special likeness, but could also represent entire circles of symbols.

A further complication of the administration occurred at the end of the 4th millennium, when the level of the Persian Gulf dropped and the Euphrates and Tigris increased their flow rate. In order to ensure that the fields continue to be irrigated, it became necessary to create ingenious retention basins and irrigation systems that had to be managed accordingly. It was during this time that writing also seems to have come into being, as one could no longer simply put a seal on, but now also had to work out certain days and regulate the assignments to certain people. Nevertheless, the cylinder seals and stamp seals remained in use.

Some other inventions are ascribed to the Sumerians, the potter's wheel and the wagon wheel. Even if both are no longer among the inventions of the Sumerians, both were decisive for the culture and the economy of the Sumerians. Since the Sumerians had achieved a fairly high standard of living, but were actually very poor in raw materials, they had to trade. The main trades they had were clay in the form of clay pots, grain, and domesticated animals. Apparently these goods were so popular that they made it to the Harrapa culture in far-away India and to Iran and Lebanon.

Statuette of Satam from Uruk (around 2400 BC, Louvre , Paris)

Sumerian is an isolated language that was used in Mesopotamia for the 3rd millennium BC. Is proven. In previous epochs there was no written record of language, after which it was more and more replaced in everyday life by the Semitic Akkadian. As the language of scholars, however, it continued to be used until the 1st millennium BC. Chr. Handed down. Sumerian was represented with the help of cuneiform script , which had initially developed as a picture script at the end of the 4th millennium . Other ancient oriental peoples then later adopted the cuneiform script and adapted it to their needs.

According to the current state of science, the Sumerian cuneiform script (more precisely: the proto-cuneiform script) is the first human script. The Egyptians only developed their own writing system about 200 years later, the Egyptian hieroglyphs. The earliest forms of cuneiform script originated in the so-called Uruk IV epoch around 3300 BC. The invention of the Sumerians was then adopted and developed by many other peoples. In total, cuneiform was used for more than 3000 years.