Georg Friedrich Grotefend (born June 9, 1775 in Münden , † December 15, 1853 in Hanover ) was a German linguist and ancient researcher . He began to decipher the cuneiform . 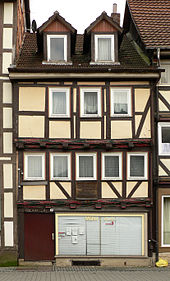 Birthplace in Hann. Münden, Ziegelstrasse No. 39

Grotefend attended the Latin school in his hometown until he was 16 , then the pedagogy in Ilfeld . From 1795 he studied philology and theology in Göttingen . In 1797, while still a student, he became a collaborator at the Göttingen grammar school (today the Max Planck grammar school ). In 1803 he came to the municipal grammar school (today Lessing-Gymnasium ) in Frankfurt am Main as vice-rector , where he was vice-rector from 1806 to 1821. In 1812 he also held the professorship for classical literature at the Lyceum Carolinum , a state university founded in the same year by Grand Duke Karl Theodor von Dalberg in Frankfurt, where he stayed until 1814. In 1819 he was one of the founders of the Society for Germany's Older History , which dealt with the publication of the Monumenta Germaniae Historica . Finally, in 1821, he became the headmaster of the Hanover Lyceum .

The estate of the Brothers Grimm contains ten letters from Grotefend to Jacob Grimm from the period between 1818 and 1821; they concern an exchange of views on the Gothic language . In 1806 he married the wealthy merchant's daughter Christel Bornemann, with whom he had five sons and two daughters.

The starting point for Grotefend's first deciphering of ten characters from the Persian cuneiform script within a few weeks in Göttingen in 1802 was a bet in which he took the position that it was possible to decipher a completely unknown writing system on its own.

For his task, he took a copy of inscriptions made by Carsten Niebuhr from the Darius palace in Persepolis . Shortly before, the Danish archaeologist Bishop Munter recognized the term for king as an inclined wedge. As a Greek teacher, Grotefend knew the historical environment and the names of the Persian kings of that time. It was also known to him from Greek tradition that the king's name was always recorded in connection with the name of the predecessor. In his search, he started from that form of the royal names that had been published a few years earlier by the French orientalist Abraham Hyacinthe Anquetil-Duperron with his translation of the old Iranian "holy book" Avesta . Grotefend found that the kings in the inscription before him could not be either Cyrus I or Cambyses I , since both names began with the same character and the first character was different. Nor could it be Cyrus and Artaxerxes I , as the first name was too short and the second too long. " So there were only Darius and Xerxes left ". In fact, it was not the name of the heir to the throne Xerxes I, but that of his predecessor Darius I who was marked with the title of king.

Grotefend's achievements initially remained known only to a small group of scholars around the Göttingen Society of Sciences , of which he became a member in 1820. He did not publish his discovery until 1837. In 1893, the philologist Wilhelm Meyer published Grotefends documents to a wider public in the news organ of the Society.

Grotefend also provided the foreword to Friedrich Wagenfeld's translation of a Greek manuscript of Sanchuniathon's prehistory of the Phoenicians (Hanover 1836), which however turned out to be an invented source a little later. In 1847 Grotefend was accepted as a corresponding member of the Prussian Academy of Sciences .

Grave in the garden cemetery in Hanover

Georg Friedrich Grotefend retired as headmaster in 1849. He was an honorary citizen of the city of Hanover and died there on December 15, 1853. He is buried in the garden cemetery (Marienstraße).

Both in his hometown Hann. Münden, in Frankfurt-Eckenheim , in Hamburg-Iserbrook , in Hildesheim, in Göttingen and in Hanover streets were named after him. The high school in his hometown has had his name since 1976. A Göttingen memorial plaque commemorates him.

His achievements for the lyceum in Hanover, for which he worked for over 50 years, commemorated a medal that was minted in 1848 for a double anniversary. The local medalist Heinrich Brehmer made the bronze medal on the one hand for the long-time director of the school, on the other hand due to the 500th anniversary of the lyceum . The front is dedicated to Grotefend, the back to the school. This page in particular is interesting because it alludes to the development of the city and the origins of the Hanover city ​​school .