Relief of Xerxes at the entrance to his palace in Persepolis 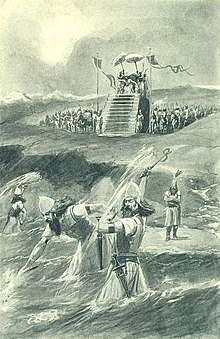 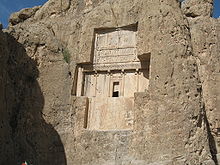 Rock tomb of the Great King Xerxes in Naqsch-e Rostam 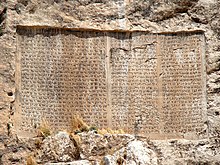 Xerxes was born around 519 BC. Born as the son of the Persian great king Dareios I and Atossa , a daughter of Cyrus II . 486 BC He succeeded his father as the great king, although he had three older brothers from the marriage of Darius to a daughter of Gobryas . At the beginning of his reign he successfully fought rebellions in Egypt , which had broken away from the Persian Empire under Psammetich IV , and Babylonia , before he split in 483 BC. BC turned to Greece .

After the punitive expedition of Darius against Greece in 490 BC. BC had failed (see Battle of Marathon and Persian Wars ), Xerxes realized his ideas of a further campaign against the Greeks. In preparation for this, he had the ship bridges built over the Hellespont and the Xerxes Canal . After initial success with the Thermopylae in the fight against Leonidas , his multiethnic army, which historians estimate at a maximum of 100,000 soldiers, suffered a decisive defeat in the sea ​​battle of Salamis against the Greek fleet led by Themistocles . The assumption of 100,000 soldiers as army strength is probably a mistake in tradition, since auxiliary workers, workers, other people and even entire population groups were included in the contingents. However, these groups of people had nothing to do with the actual battle and must therefore be factored out.

Hans Delbrück , who generally took a very critical approach, assumed that it was not possible to supply 100,000 soldiers, especially since the high number of soldiers did not correspond to the small population at the time. Delbrück therefore assumed that there were a maximum of 20,000 soldiers who went into battle. Modern research also assumes that the Persian army was significantly smaller than the exaggerated information in the ancient sources suggests, although Delbrück's calculation is probably underestimated.

After the defeat of Salamis, Xerxes withdrew to his capital Susa and only followed the defeat of his army at Plataiai from a distance, but no longer intervened in the events himself. Since Xerxes - in contrast to his ancestors - never wielded a sword in battle, he commissioned strategists capable of warfare who were equipped with enough experience, such as Mardonios , to whom he entrusted the army on the campaign against Greece, or his half-brother Achaimenes , who for him 484 BC BC put down the uprising in Egypt.

Contemporary historians and authors, such as the Greek poet Aeschylus , attributed the failures of Xerxes, among other things, to his lack of prudence and lack of religious tolerance , the causes of which, according to current estimates, were probably the influence of his mother Atossa and the strengthening of the magicians . On his way to Greece, Xerxes I stopped in Troy and reported about the Trojan War . Thereupon - in stark contrast to the teaching of Zarathustra - 1000 cattle sacrifices are said to have been offered. An anecdote tells of the fact that Xerxes I. had the strait punished with 300 lashes when a bridge over the Dardanelles failed . According to Herodotus, he wanted to punish the Hellespont for the fact that his bridges were destroyed by a storm shortly after they were built.

479/478 BC In the eighth year of the reign, Xerxes had the tower of Babylon and the Marduk statue destroyed. This made it impossible to take Marduk's hands , which was essential for the appointment as king of Babylon . Since then there was no longer the office of king and the cult of Marduk. Babylon's final end was thus also accomplished ritually .

Xerxes devoted himself to the construction of colossal buildings in Persepolis and Susa . In Persepolis he completed the Apadana begun by his father and built a large palace for himself, and he also began building the Hall of Hundreds of Columns . Not only in the various residences no building contract was too expensive, but also the breach of land at the Isthmus of Athos - the Xerxes Canal to prepare for war in 483-480 BC, contrary to the opinion often held in the past . - shows his passion for construction. When Athens was sacked in 480 BC. He had the most beautiful exhibits transferred to Persepolis and Susa and set up there, including the sculptures of the tyrant murderers Harmodios and Aristogeiton.

The date of death of Xerxes could be traced back to August 4, 465 BC through the mention of a partial lunar eclipse in a cuneiform fragment. To be set.

Xerxes I. provides the historical background for the figure of Xerxes in the opera seria of the same name - also known by its original Italian title Serse - by Georg Friedrich Händel ( HWV 40).

In general, Xerxes is also equated with the figure of Ahasuerus in the biblical book of Esther .

Commons : Xerxes I.  - Collection of images, videos and audio files