Persis ( old Persian Pars-a / Parš-e , Akkadian Pars-u-aš / Pars-um-aš / Pars-ua , Aramaic Paras ) was originally a name for a region not far from the Zagros Mountains on Lake Urmia . The country name Persia was derived directly from the old Persian Parsa . Over time, the settlement area shifted to the southwest of what is now Iran (today's Fars ).

The Persians are first mentioned as Pars-ua in the 9th century BC. Under Shalmaneser III. north of Lake Urmi, before in the 8th century BC The settlement took place in the old Elamite center Paras near Susa . At the turn of the century, the move to Anschan began .

The current province of Fars is said to have been established in the 7th century BC. . Under BC Teispes for stem landscape of the Achaemenid have developed in accordance with mythical tradition the land among his sons I. Ariaramna and Cyrus I aufteilte. However, cuneiform documents confirming the division are missing. 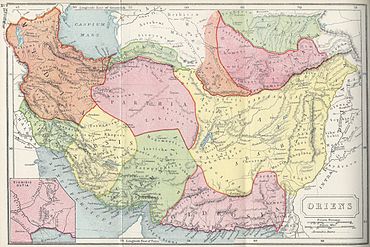 Orient (shown on a historical map from an English history Atlas from the year 1907) . "PERSIS" is marked in it (with border) .

As a cult center, the region later retained its historical importance under the Sassanids . During the Sassanid period there were various fire temples to be found there (see Zoroastrianism ). However, the rather unfavorable location made it difficult to rule the empire from here, so that there was always a seat of government in the west ( Mesopotamia ).

Developments up to Islam

The most important cities in Persis were under the Achaemenids Persepolis and Pasargade , later under the Sassanids also Istachr . The Sassanids, who were sub-kings of Persis under the Parthians, also had other cities built.

The climate of this landscape is very different. In ancient times, Strabo reported that it was divided into three parts. The coastal region is hot and sandy, while the region further inland beyond the mountains ( Zagros Mountains ) is irrigated by rivers and lakes. Here the climate is cool and the soil is partly very fertile (cf. Strabo XV. 727).