The title of this article is ambiguous. Further meanings are listed under Fars (disambiguation) . 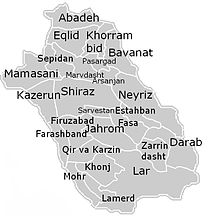 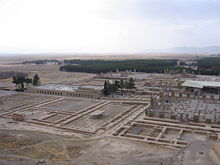 The ancient capital of the Persians: Persepolis

The province of Fars ( Persian فارس Fārs ) with the capital Shiraz is the central southern province of today's Iran and was the heartland of the Persian Empire 3000 years ago as Persis . Two powerful old Persian- ancient royal houses come from here: the Achaemenids ( 559 to 330 BC ) and the Sassanids ( 224 to 651 ).

Fars is only one of the 30 administrative areas of Iran today , but it takes up about 10 percent of the area of ​​Iran. Its borders are about 400 to 1000 km south of Tehran between the Kuhrud and Zāgros mountains (up to 4300 or 4500 m high), which makes the climate relatively pleasant. The majority of the province's population are Persians , Lurs and Kashgai . Smaller proportions are made up of Kurds and Bakhtiars and members of Turkmen tribes.

The province of Fars is divided into 23 administrative districts ( Shahrestan ):

The first traces of settlement in Fars are dated to at least the 5th millennium BC. Dated. Before the Persians, Fars was part of the Elamite Empire. The Elamite city of Anshan was founded in the 7th century BC. Conquered by the Persians under Teispes . As the nucleus of the ancient Persian empires, Fars is of great importance for the history of Iran. This can be seen in the large number of ancient royal residences and fortresses in the region. Numerous dynasties ruled Fars over the millennia. There were also local royal houses whose power was limited to the province. After the defeat of the Achaemenids against Alexander the Great in the 4th century BC At first the Seleucids ruled here . These were later ousted by the Parthians , who in turn were overthrown by the Sassanids in the 3rd century AD. In the seventh century, the Muslim Arabs conquered all of Iran. From the Islamic period, Fars' center shifted from Istachr to Shiraz. In addition, the Arabic name Fars established itself as the name of the region, replacing the old Parsa (or Pārs ). Shiraz became a residence of Arab emirs. From here, ruled from the 9th century from Daylam originating Buyids that in the 11th century by the then Seljuks were defeated. With the weakening of the Seljuk central power, local princes and kingships established themselves. This is also the case in Fars, where the Salghurids ruled as Atabegs between the 11th and 13th centuries . After them came the Mongolian Ilkhans . But the empire of the Ilkhan broke up into several smaller empires in the middle of the 14th century. Fars and the rest of southern Iran were then ruled by the Muzaffarids . In the 16th century, Fars finally became part of the Safavid Empire; since then there have been no more independent empires in Fars.

The centrally located city of Shiraz is one of the most beautiful Persian cities and is famous for its garden culture because of its mild climate. It is called the Garden of Iran because of the abundance of flowers and famous rose cultivars. Popular grape varieties also grow in the mountains around the city. The octagonal pavilion of the Pars Museum describes the region and its dynasties.

In Shiraz, two of the most famous poets of Persia are in graceful mausoleums buried on the outskirts: Hafiz (Hafez, 1320-1398) and Saadi (1184-1282). In addition to Hafez, the mathematician and astronomer Omar Chayyām also worked here .

Persepolis , the ancient capital of the Persian Empire, lies on a plateau 50 km northeast . It was founded by Dareios I in the 6th century BC. Founded in BC , but set on fire in 331 by the army of Alexander the Great . Much of the palace complexes, the Apadana pillared hall and other buildings can still be seen on a large, man-made platform. The more ancient royal capital Pasargadae is located in the region of Fars, the former boundaries of the Persian provinces of Yazd and Khorasan marginalized, the centers of Zarathustra -Religion or the ancient science.