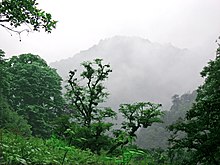 The historic village of Masuleh in Gilan

Gilan ( Persian گيلان, DMG Gīlān ) is one of 31 provinces of Iran . The capital is Rasht .

In 1996, 46.8% of the population lived in cities and 53.2% in rural areas. Most residents speak Gilaki as their first language . In addition, Taleschi is spoken in the northwest of the province ( Talesch ) . For several decades, however, dominated in some areas Taleschs Azeri , with the Turkish language related to the Azerbaijani population from the north-west Iran (the provinces of Ardebil , and West and East Azerbaijan ). Smaller minorities speak Galeschi, Kurdish , Tati and Domari ( Roma ).

The Iron Age burial ground of Amlasch is in the province of Gilan.

In the course of the Russo-Persian War (1722–1723) , Russian troops occupied the city of Rasht in late autumn 1722 , supposedly to protect it. In February 1723 the governor of the city assured that the Persian troops could ensure security themselves and that the Russians would please leave. The Russians, however, broke their promise to withdraw their troops; they were therefore besieged in their barracks. At the end of March 1723, the Russian troops broke out, killing more than 1000 Persian soldiers and forcing the Persian Shah Tahmasp II to negotiate. His ambassador, Ismail Beg, had to sign the humiliating Treaty of Saint Petersburg in September 1723 . One of the provisions of this treaty was that Gilan would be ceded to Russia.

The Russian Emperor Peter the Great wanted to annex the newly acquired territories permanently to Russia. He had the castles Derbent and Heiligkreuz expanded and information about the economic basis of the conquered regions sent to him. In May 1724 he wrote to the Russian commander of Rasht to invite Armenians and other Christians to Gilan and Mazandaran and settle them, while the number of Muslims should be quietly reduced so that they would not notice. In practice, however, the Russian occupation caused great economic damage. Silk production fell sharply and did not recover for many years because the silk makers had fled the province. For Russia the occupation of the Persian provinces was expensive; more than half of the soldiers did not return from the campaign. The successors of Peter the Great decided to make peace with Persia, even if the occupied provinces would have to be returned. The Rasht Treaty of 1732 stipulated that Gilan would be returned to Persia.

The province of Gilan is divided into twelve counties: