Kerman ( Persian کرمان) is one of the 31 provinces ( Ostan ) of Iran , located in the southeast of the country.

The old road from Tehran to Pakistan and Afghanistan runs through Kerman . The Kerman dialect of the Persian language, which is still partly widespread in the region, is difficult to understand for Iranians from Tehran. The Kermanis speak an ancient dialect (as do the people from Yazd , Khorasan , Sistan and Baluchestan or Fars , since the Persian ethnic group is numerous in Iran), which still contains many real Persian terms.

The climate of the sparsely populated province is desert-like with hot, dry summers and cold, dry winters. The capital, like the province, is called Kerman and has 320,000 inhabitants. It lies at an altitude of 1748  m and has a relatively pleasant climate.

The contact region of the Arabian and Eurasian plates runs through Iran . Therefore, Iran is repeatedly the scene of strong earthquakes . The Kerman region in particular will then be severely affected.

The archaeological site of Jiroft is located in Kerman , after which the Jiroft culture is named and dates back to the late 3rd millennium BC. Shows. The Kerman region appears later in the Achaemenids as a satrapy Carmania ( ancient Greek Καρμανία , Latin Carmania ) on.

The medieval province of Kerman had access to the Persian Gulf or the Arabian Sea and together with Hormozgan was the core of the empires of the Kerman- Bujids (10th / 11th century), the Kerman-Seljuks (11th / 12th century) and also of the last Zand princes of modern times (18th century). 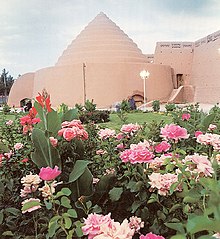 Arg-e Bam before the 2003 earthquake

Large parts of Iran are considered to be earthquake-prone (see Iranian plate ).

On December 26, 2003, an earthquake with a magnitude of 6.6 struck around 250 kilometers southeast of Sarand near the city of Bam, killing at least 26,000 people. In the summer of 2004 there was another, but lighter, earthquake in the region.

On February 22, 2005, a severe earthquake occurred at around 5:55 a.m. About 30,000 people in 40 villages were affected. Most of the buildings in the poor, sparsely populated region are made of adobe bricks and can hardly withstand earthquakes.