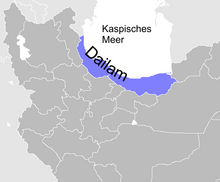 Dailam or Deylem ( Arabic ديلام, Persian دیلمان) is the historical name of a mountainous coastal region in the south of the Caspian Sea . The eastern Tabaristan (today's Mazandaran ) and the western Gilan are assigned to Dailam in the broad sense.

Because of its mountainous character, Dailam was protected from attacks by the Arabs and was Islamized late . The managers of ( Kadchodā ruled) Daylamites attended by the missionaries of the Zaydi the Shi'ism to. The Arab historian Ibn al-Athir said of the Dailamites that they adopted the Shiite religion. Before Islamization, the majority of the population belonged to Zoroastrianism .

Hamzah al-Isfahani , a 10th century Persian historian, reports that the Persians called the Dailamites Kurds of Tabaristan and the Arabs called them Kurds of Suristan . However, the Dailamites were not ethnic Kurds in the modern sense.

Since the time of the Sassanids , the Dailamites were sought after as foot soldiers and were used as mercenaries by Islamic dynasties such as the Ghaznavids and Fatimids . Nizam al-Mulk suggested in his work Siyasatnama that the Turks and Dailamites be used as soldiers.

As with the fortress of Alamut one of the centers of the Dailams nizari , a grouping of the Ismailis was taken over, the Daylamites were as Fedayeen used.

During the time of the Dailamite empires and dynasties between 800 and 1000 AD, a large group of Dailamites immigrated to Anatolia.

The Arab geographer al-Muqaddasi said of the Dailamites that they were tall and pretty.

According to a thesis of the German Iranist Friedrich Carl Andreas from 1906, the Parthian-born Dailemi (Dêlemî) living in the South Caspian region were ancestors of the Zazas , which could explain one of the current names for the Zaza, namely "Dimli". This thesis was already advocated by the Armenian historian Antranig in 1880 and later found the support of the Russian orientalist Wladimir Minorsky and the German Iranists Oskar Mann and Karl Hadank .