Fortress walls (taken in 2006, two years after the earthquake)

Alamut ( Persian الموت, DMG Alamūt , from Dailamitisch Alūh amū [ch] t - "Eagle's guidance / guidance" or "The Eagle's Teaching") is a mountain fortress in Dailam , about 100 km from Tehran , which is now in ruins . It is located in the Qazvin Province in northwestern Iran , south of the Caspian Sea .

Location of the Alamut fortress on a steep rock 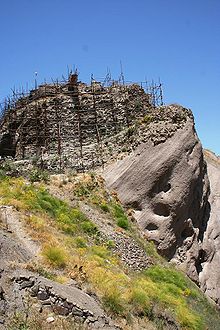 Reconstruction work after the earthquake (2008)

The fortress was loud hamdallah mustawfi in 840 in 2100 meters in altitude of Wahsudan ibn Marzuban († 865) of the dynasty of Dschustaniden built by Daylam on a rock. The name Alamut refers to the founding story, according to which a tame and released eagle landed on the rock and thus inspired the ruler to build it. Since there was only one entrance to it, it was easy to defend.

In 1090 Hasan-i Sabbāh , the founder of the Assassins , took the citadel , which was considered impregnable, from its Seljuk governor Mahdi without bloodshed by a surprise attack and the payment of 3000 dinars . He strengthened the fortifications and set up storage facilities for possible sieges. Together with neighboring settlements, the area around Alamut was made usable for growing grain by building terraces.

In the following period, the fortress was the headquarters of the Persian Nizarites , an Ismaili group, for 166 years . The sphere of influence of Hasan-i Sabbah and his successors was later expanded into a network through further fortresses (such as that of Lamasar ). These castles (called dar al- hijra , “house of emigration”) were used by the Ismailis throughout Persia and Syria as refuge in the event of persecution or conflicts.

The reign of the Assassins of Alamut was only in 1256 by the Mongols - Khan Hülegü broken, with a huge army laid siege to the citadel and took on 20 December of that year. Ata al-Mulk Juwaini had some Koran manuscripts and scientific works sorted out from the large library that the rulers of Alamut had compiled and the rest burned.

In 2004 parts of the walls were destroyed by an earthquake .

Alamut in the media

Stories and legends of the rulers of Alamut still play a role in the Middle East and Central Asia as well as in the Arab countries.

They were also taken up by writers in the West, for example in some novels by William S. Burroughs , in the novel Alamut by Vladimir Bartol and the novel Das Foucaultsche Pendel by Umberto Eco or in Samarkand by Amin Maalouf . Another well-known literary processing of this motif can be found in the novel Das Halsband der Taube by EW Heine . In addition, the fall of Alamut and the assassins in Peter Berling's pentalogy The Children of the Grail , in the third volume entitled The Crown of the World , is described in detail and woven into the novel.

Alamut also plays an important role as the capital of Princess Tamina's realm and as the hiding place for the hourglass with the "sands of time" in the 2010 video game adaptation Prince of Persia: The Sands of Time .

In the TV documentary series Terra X of the ZDF has resulted in 72 under the title The Secret Society of Assassins - death messengers from Alamut reports on the history of the fort and its rulers.