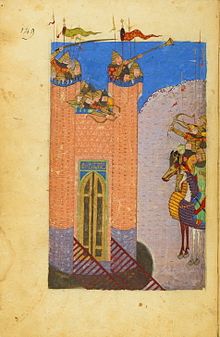 Depiction of the Battle of Alamut by Juwaini

He was born in Dschuwain, a town in the province Großchorasan to the today's province of Khorasan in Eastern Iran and northern Afghanistan included.

His grandfather was the sahib-divan or finance minister of the last Khorezm Shah Jalal ad-Din . Dschuwaini's father, Baha ad-Din, became a sahib-divan under Ögedei , the successor to Genghis Khan . During the absence of his immediate superior, Baha ad-Din also acted as deputy to the Emir Arghun Agha.

Juwaini himself became an important official of the empire. In his youth he had visited the Mongolian capital Qara Qorum (Karakorum) twice , he began his story of the Mongol conquests with one such visit (approx. 1252–53). He was there when the Ilchan Hülegü took the mountain fortress of Alamut in 1256 and was responsible for saving part of their famous library. He had accompanied Huegu during the sack of Baghdad (1258), and the next year he was appointed governor of Baghdad, Lower Mesopotamia and Khuzestan . Around 1282, Dschuwaini attended a Mongolian Kurultai that was held in the Ala-Taq pasture areas northeast of Lake Van . He died the following year in Mughan or Arrān in Azerbaijan .

Dschuwaini's influential brother Shams ad-Din, who had served as finance minister under the Khan Huegu and Abaqa , was the husband of Khoshak, the daughter of Awak Zak'arean-Margrceli. Consequently, through his own work as well as his family connections, Juwaini had access to much information that other historians could not obtain. For unknown reasons, Dschuwaini's history ends more than twenty years before the author's death in 1260.