The title of this article is ambiguous. Further meanings are listed under Dinar (disambiguation) .

Dinar of the Aghlabid emir Ibrahim I (808) 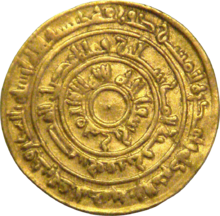 today's distribution area of ​​the dinar:

Dinar is the historical gold denomination in Southeastern Europe and in the Islamic culture. The name can be derived from the Roman denarius ( Denarius aureus ). The Arabic dinar ( Arabic دينار, DMG Dīnār ), which took up Sassanid models, for the first time in the course of the coin reform of the Umayyad Abd al-Malik in 696. Even today, the dinar is the designation of various national currencies, mostly in Arabic-speaking countries.

In the first fifty years of Islamic expansion , the conquering Arabs in the conquered territories initially imitated the coins that were in circulation there. In the late ancient Iranian Sassanid Empire , a largely monometallic silver currency was used, while the Eastern Romans mainly minted gold , bronze and copper coins. But the Sassanids also had a small amount of gold coins struck, which were called dinar based on the Roman term . The dinar also appears in the Koran, namely in sura 3:75 : "And among the people of the Scriptures there are some who, if you entrust them with a qintār , will hand it over to you (without hesitation). But there are also some among them who, if you entrust them a (mere) dinar, will only hand it over to you (again) if you give them hard work. "

In the earlier Sassanid provinces, after the Arab conquest, silver drachmas and gold dinars with the image of the heads of Chosrau II or Yazdegerd III continued to be used. embossed on the obverse and a fire temple on the lapel . Only the date was changed, a short pious legend in Kufi and the name of the respective Arab ruler was added. There have also been a few experimental attempts to depict Islamic symbols or portraits of Muslim rulers.

It was not until 696, the year of the Umayyad Abd al-Malik's coin reform , that a bimetallic currency system consisting of gold and silver coins was used in his domain. The dinar, introduced in 696, is the gold coin in this system: the Byzantine solidus was used as a model and the portrait of the emperor Herakleios was replaced by the portrait of the caliph . Subsequently, the illustrated coins were completely replaced by aniconical, purely epigraphic pieces, thus enforcing the Islamic ban on images also for coins. The classic gold dinar weighed 4.233 grams.

The Islamic expansion meant that the dinar became the most important gold currency in the world in the early and high Middle Ages. The gold dinar of the Ayyubids , Almoravids and Almohads deviated from the standard weight and weighed 4.722 grams. Over a period of 750 years, the dinar has shown great stability. With the beginning of the Renaissance, however, its importance waned - except in North Africa - due to the spread of coin types from the Christian culture. Just as the Celts used to imitate the Greek and Roman currencies, the Christian rulers in Spain, Sicily and Jerusalem also imitated the Arabic coins. The tari , which was used in Sicily, Malta and southern Italy and is strongly influenced by the Arabic quarter dinar, should be mentioned as an example.

Modern currencies of this name

No longer in use

The hundredth division of the Iranian rial is also called a dinar (1 Iranian dinar corresponds to 1/5 shāhi or 1/20 abbāsi ), but inflation has made it meaningless.